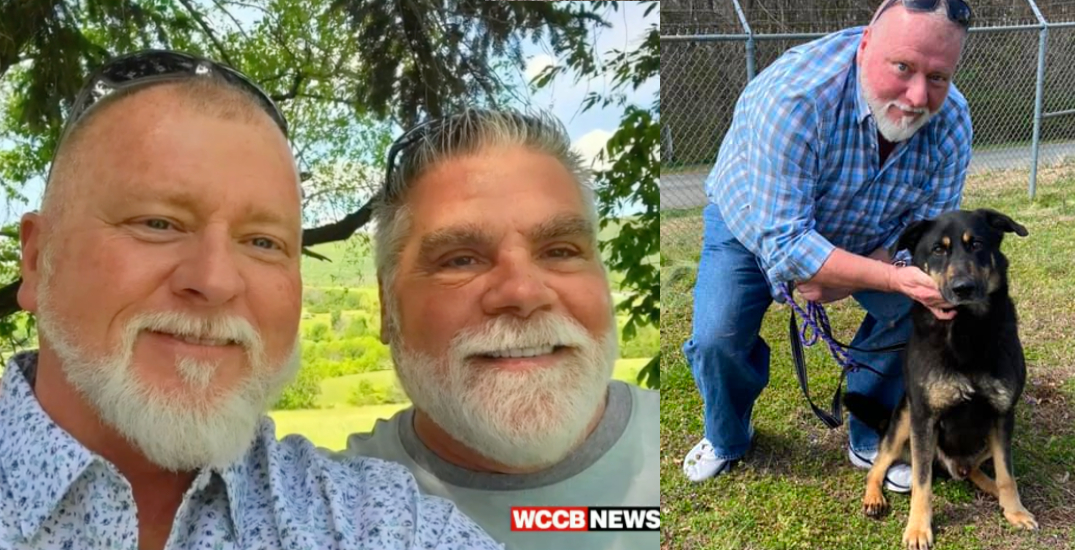 It might be the most bittersweet story you’ve heard all month. A “gay” dog dumped at a North Carolina shelter for humping a male dog has found a new home, and his parents are a gay couple.

On March 17, WCCB Charlotte reporter Morgan Fogarty broke the story of Fezco, the sweet boy who had been abandoned at Stanly County Animal Protective Services in Charlotte, North Carolina.

Given the absurdity of his owner’s reasoning, Fezco’s story went viral and got a ton of media attention. Luckily, NC couple John Wynn and Steve Nichols stumbled upon his story and decided to bring him home.

Aside from head pats and belly rubs, they also gave him a new name. Fezco has been renamed Oscar after the iconic 19th century poet and gay icon Oscar Wilde.

“We’re pretty certain he’s not gay because he hates having his picture taken,” said Nichols in an interview with NBC News. “You know, what gay person does not love [having] their picture taken?”

Nichols and Winn, who have been together for over three decades, applied to adopt Oscar after seeing the WCCB Charlotte news story about him on social media. Within 30 minutes of sending their application, they received a response and moved on to sign the paperwork.

“In 33 years, we’ve faced the same ignorance and bigotry,” Nichols told NBC News, referring to the discrimination that led to Oscar being abandoned. “We talked about it and we said this time, we’re going to do something’ and we did,” Nichols added.

According to TMZ, the couple already has a terrier-chihuahua mix pup named Harry, who, we’re sure, is pumped to be around his new “gay” friend.