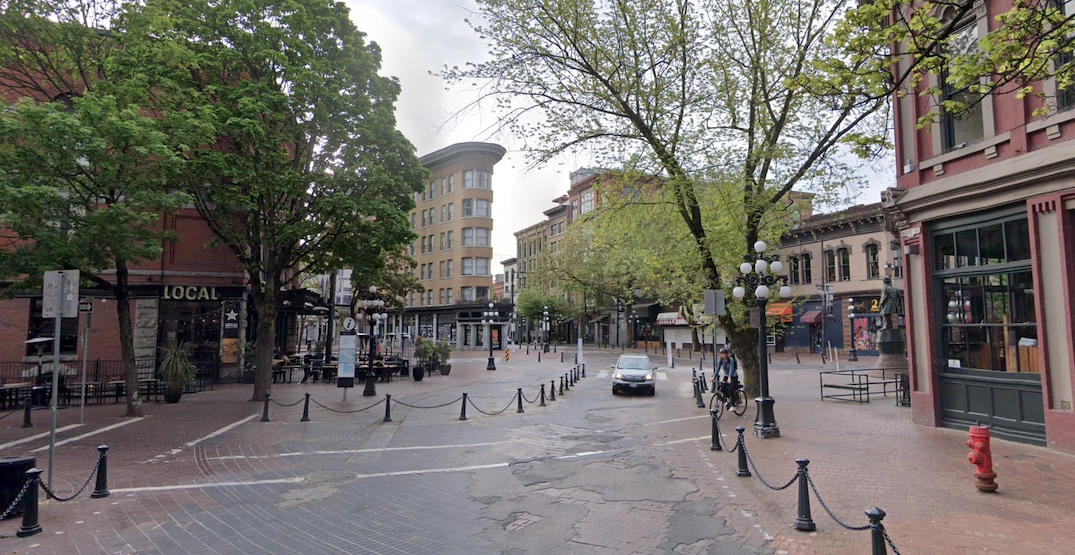 Cobblestone pavers are in poor condition across Gastown, including on Water Street at the intersection with Carrall Street. (Google Maps)

If you have been in Gastown recently, you may have noticed that some repair work is being conducted on the cobblestones of Water Street.

The street surface of brick pavers was first installed in the middle of the 1970s, but the street has seen limited reinvestment ensuring a state of good repair, especially in the vicinity of the intersection of Water and Abbott streets.

According to the City of Vancouver, the cobblestone repairs were triggered by BC Hydro’s utility work that dug up sections of the street to bury its infrastructure in the area. A subcontractor for the electric utility is overseeing the repair work, with major work slated to be completed in early June. Some lingering construction activity will continue into July.

But the business improvement association (BIA) that represents Gastown is calling on the municipal government to improve its upkeep standards for district’s roads.

“The current state of the streets and sidewalks in Gastown is less than satisfactory, and the work that is being done on restoring the cobblestones today, following the BC Hydro work, is only the start to a very long road ahead, both figuratively and literally,” Elise Yurkowski, the manager of project and development for Gastown Business Improvement Society, told Daily Hive Urbanized in an email.

“The practice of filling in missing pavers with asphalt, which has been the solution for many years, is unacceptable. This neighbourhood deserves more – as a National Historic site, business district, and a main attraction in Vancouver.”

Cobblestone streets have been a fixture of #Gastown since they were installed in 1974-75.

You’ll notice a restoration taking place on our street & we appreciate your patience as we continue to advocate for the beautification of our streets @CityofVancouver. pic.twitter.com/MbTEZ9Ljfc

She adds that her BIA is looking forward to beginning to see some changes and are “working incessantly” with the municipal government to “change past practices and to continue to find the funds necessary to revitalize the Gastown roads.”

In 2021, the BIA released a study it produced outlining its vision for transforming Gastown’s public realm. This includes not only basic repairs to the cobblestones, but widening sidewalks onto curbside vehicle parking spaces, creating pedestrian-oriented streets, establishing event-friendly spaces, and a relocation of the Steam Clock to the intersection of Water and Cordova streets.