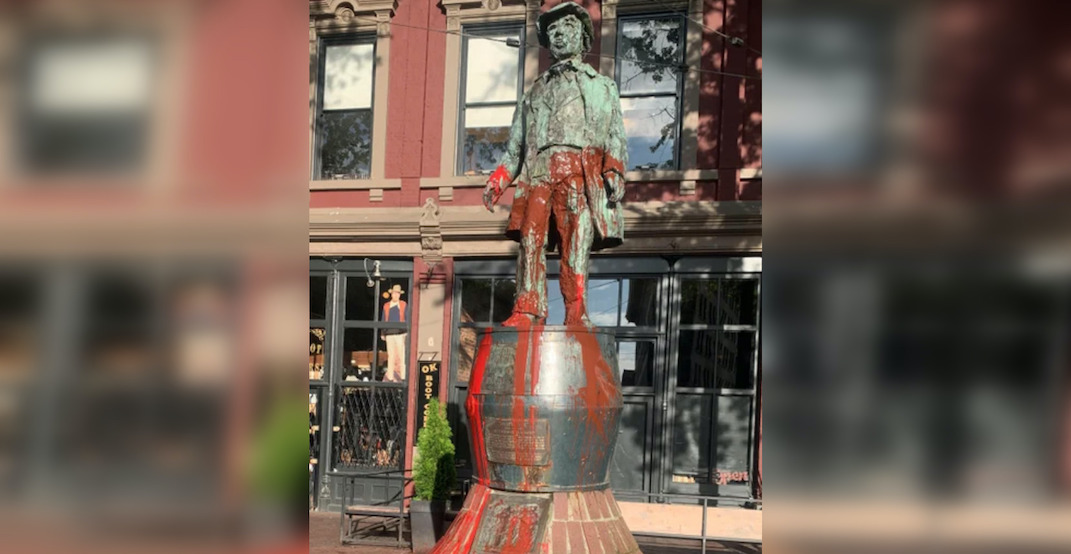 The statue of John Deighton in Gastown, also known as “Gassy Jack,” was vandalized with red paint Tuesday morning.

The image was shared to Reddit with the caption “What did Gassy Jack do to deserve this?”

What did Gassy Jack do to deserve this? from r/vancouver

Gassy Jack is not the only statue to be vandalized in Vancouver; the statue of George Vancouver was defaced last week.

It’s unclear when exactly the vandalism took place and who was behind the incident, but according to the Vancouver Police Department, the matter is currently under investigation.

Although Deighton is memorialized with a statue in downtown Vancouver, some Indigenous women have been trying to tell the true story of Gassy Jack for some time.

A documentary called Red Woman Rising by Battered Women’s Support Services tells the story of Deighton and the women whose names were erased from history in place of his.

According to the documentary, Deighton was married to an Indigenous woman whose name has been lost to history. He then “purchased her 12-year-old niece Quahail-ya to act as his ‘wife.'”

“Connecting the dots between what happens to the land, happened to my women first. All across Turtle Island, the women have been commodified, we have been dehumanized, we have been hyper-sexualized, and we are hunted. We are murdered,” says Musqueam activist Audrey Siegl in the documentary.

“This is connected to Gassy Jack because he ran a bar that catered to loggers and the other men who were doing the work that destroyed and removed the trees, and my ancestor’s spaces, that catered to the men who violated my women, and Gassy Jack himself, married to a First Nations woman whose name is erased, deleted, forgotten.”

As protesters across the world condemn the horrific histories of many figures memorialized in the form of statues, it begs the question of whose names deserve to be remembered and what histories are obscured in the process.

“His name is here, on land that was never his,” says Siegl.

A petition to get the statue removed has over 1,000 signatures.