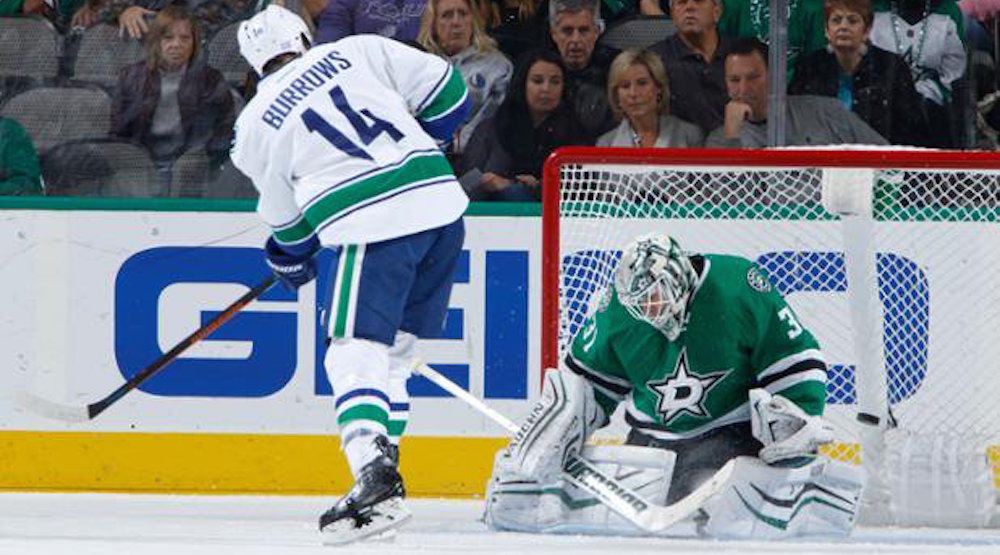 The Canucks will look to build on a tidy 4-1 win against the Arizona Coyotes on Wednesday night, but are very aware that beating the worst team in the league only carries with it the slightest of momentum.

The Dallas Stars will present a tougher challenge tonight for Vancouver. The Canucks were, in a sense, gifted a win in Arizona via mediocre goaltending from Mike Smith.

The Canucks have called up Alex Grenier from Utica. If you’re worried the Comets will run out of players, I don’t blame you. Vancouver now has Michael Chaput, Jason Megna, Joe LaBate and Grenier all up at the same time.

After his first-career three-point game, Sven Baertschi will draw out of the lineup with an undisclosed injury. Jason Megna will take his place with Horvat and Baertschi.

Ryan Miller will get his second consecutive start on the road.

1. The resurgence of Alex Burrows

Alex Burrows is back!

After some uncertainty in the offseason as to whether the Canucks were willing to bring him back, Burrows is playing his best hockey in years.

This this is very good news for Jim Benning.

Burrows is in the last year of a four-year contract that carries a $4.5 million cap hit. He is going to command significant interest from many teams as the deadline draws closer. Burrows has been one of the best stories in Canucks history and deserves another shot at glory. On the flip side, Benning cannot let another valuable player play out a contract without getting any return prior to or at the deadline.

In the meantime, Burrows has fit in nicely on a line with Bo Horvat and Sven Baertschi. It’s a line that could provide Vancouver the elusive secondary scoring that they absolutely need to be even remotely successful, assuming that Baertschi is not out for long.

2. The birth of Bo SCOREVAT

His seventh, from Burrows and Sbisa. pic.twitter.com/GgnraHS2GJ

Bo Horvat is on pace for a 29-goal season. Not bad for a so-called “third-line centre”.

Horvat’s importance to the Canucks is evidenced on a nightly basis. His emergence as a scoring threat is exactly what Vancouver needs in order to be successful.

No wonder Benning wants to lock him up to a long-term contract.

Tonight in Dallas, watch the aforementioned Megna-Horvat-Burrows line intensely. If they have it going early, this takes a lot of pressure off the Sedins to provide offence and gives the Canucks a much better chance to win.

As Bo goes, so do the Canucks.

The Stars look to be an underperforming team based on their record at the quarter pole of the NHL season, but much can be attributed to a lack of health. The Stars have lost an amazing 94 man games already this season amongst their group of forwards.

One forward they will miss all season is Valeri Nichushkin. The young Russian bolted back to Russia to join CKSA Moscow of the KHL.

Keep your eyes on ex-Canuck Dan Hamhuis on the Stars blueline. Hamhuis still logs big minutes for the Stars, but frankly does not look right in that jersey. The Stars defence corps in general has been underwhelming.

The same can be said for their goaltending. Dallas allows the most goals against in the NHL. The Canucks put five goals past Kari Lehtonen the last time these two teams met on November 13th.

Antti Niemi was the first goalie off the ice at morning skate. Look for him to get the start tonight. #VANvsDAL pic.twitter.com/dzTw7iar1R

The Canucks had a fun time in Glendale, but Dallas won’t be so accommodating. Look for Vancouver to get overwhelmed by the Stars early on route to a 4-1 loss. The only moral victory comes from the knowledge that the Canucks were right to pick Horvat over Nichushkin in the 2013 NHL Draft all along.