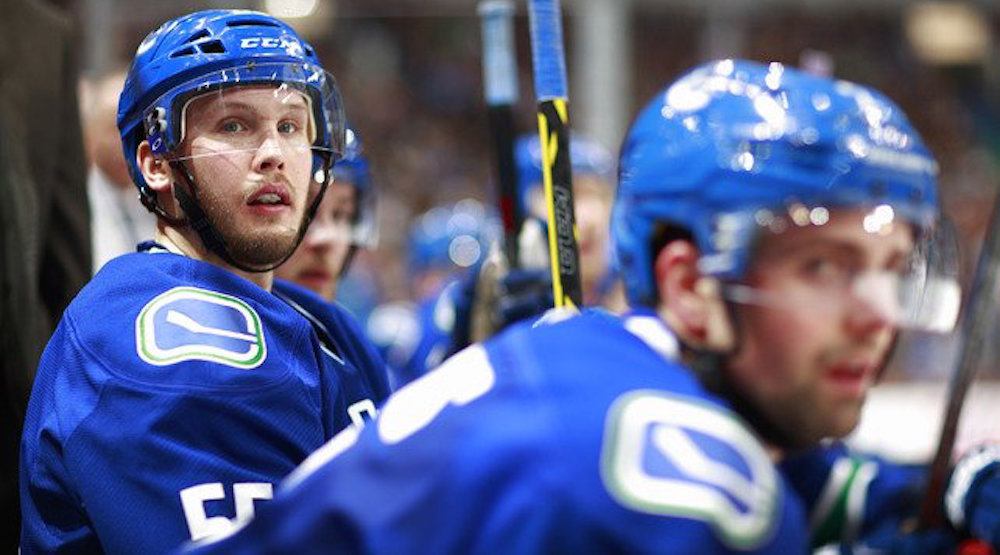 Eight minutes and 37 seconds. That’s how much Canucks defenceman Alex Biega has played a quarter into this season.

Zero seconds is how long he’s played at his natural position.

The 5-foot-10 defenceman looked to have finally secured a full-time NHL spot last year, after playing five seasons in the American Hockey League. He signed a two-year, one-way contract with the Canucks in February, and played a career-high 51 NHL games last season.

But this year, Biega finds himself in limbo. Like Frank Corrado in Toronto, he’s a fixture on the team’s fourth defence pairing.

Canucks management are reportedly unwilling to send Biega to Utica for fear that he’ll get claimed on waivers by a team wanting him in order to meet exposure requirements for the expansion draft in June. This may seem like a silly thing to worry about – players like Biega are a dime a dozen – unless GM Jim Benning feels like they may need him to expose to the Vegas Golden Knights.

All teams must expose at least one defenceman with more than two seasons of professional experience that has played 40+ games this season or 70+ games over the past two seasons, and is under contract in 2017-18. With the Canucks expected to protect Chris Tanev, Alex Edler, and Erik Gudbranson, that leaves Luca Sbisa and Biega (assuming they play enough games) eligible to be exposed.

Consequently, the Canucks need one and not both of Sbisa and Biega going forward. If they feel like they can’t lose either one, then perhaps they’re planning to dangle one of them in a trade.

The Canucks were planning to carry eight defencemen this season – a smart move given Vancouver’s history of d-men getting injured – but Biega has managed to find himself #9 on the depth chart because of the emergence of rookie Troy Stecher.

Biega found his way into one game this year on October 23rd, but as a forward.

Since then, it’s been practice, practice practice.

Friday’s game against the Dallas Stars will mark the 20th time Biega has been a healthy scratch this season.

While I’m sure Biega’s bank account doesn’t mind being an NHL practice player, if this continues much longer it won’t be good for the 28-year-old, who should be entering the prime of his career. Not only does he not get to play in NHL games, he misses a chance to prove he belongs in them as well.