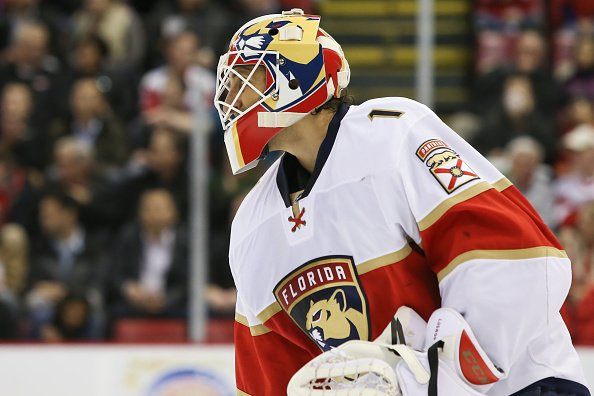 The Canucks roll into Sunrise trying to sweep the state of Florida as they take on a struggling Panthers team. Vancouver is riding huge momentum after a 5-1 win in Tampa Bay on Thursday night.

There was some talk locally that the Canucks may make a waiver wire claim on Ryan Garbutt to bolster the fourth line, but that never came to fruition. In fact, that was just plain crazy talk!

The Canucks will ice the same lineup that we saw in Thursday’s win against the Lightning. Jannik Hansen is with the team and is close to returning, but will not play.

Expect Markstrom to make 1st start in FLA and Luongo to counter. #Panthers puck stopper is 2 wins shy of tying Sawchuk for 5th all time

The Canucks have called up blue chip goaltending prospect, Thatcher Demko, with Ryan Miller experiencing some tightness late in the Lightning game. Jacob Markstrom gets the start in goal.

1. Blueline surviving despite the injuries

The Canucks top pairing of Chris Tanev and Alex Edler appear weeks away from returning to the lineup. Despite this, the Canucks D corps is actually holding up quite well. Troy Stecher is a revelation and Nikita Tryamkin looks better each game out.

This begs the question: Where does Erik Gudbranson fit in on this team going forward?

It appears that when Tanev is healthy, Gudbranson should slot in as the third best option on the right side. If a trade happens, look for Benning to trade one of these two.

For now, the injuries have provided Canucks fans a glimpse of the future on defence. Watch for Stecher to have a big game tonight.

Just had to convince a guy in the office that I wasn't lying about Megna and Skille scoring two goals each last night.

Every team needs scoring from unlikely sources. The Canucks rarely get it.

Jack Skille, Jayson Megna, and Erik Gudbranson were the goal scorers in Tampa Bay a few nights ago and this was a sight for the sore eyes of Willie Desjardins.

Let’s see if the Sedins and Bo Horvat can get some help in Florida.

3. The ties that bind

Like it or not, it seems like the Canucks and Panthers will forever be tied in some form or another.

There is that minor issue of the possible, some say pending, matter of the cap-recapture on Roberto Luongo’s contract. It looks really ugly for Vancouver if Lu retires in 2020 or 2021 by the way. So bad that it will make you want to cry.

The poster team for hockey analytics’ core revolves around players drafted by the “old school” regime. The Panthers are led by Alexander Barkov, Jonathan Huberdeau, Nick Bjugstad, and Aaron Ekblad.

Keep your eye out for diminutive forward Jonathan Marchessault. The bargain free agent signing leads the team scoring with 10 goals and 9 assists in 25 games (score one for the Army boys).

Since dumping their coach to the curb on November 27th, the Panthers have lost five of their last six games, including losing their last four in a row.

The Canucks out-PDO’d (114 for those that count these things) themselves in Tampa Bay and can’t possibly expect the same type of luck in Sunrise. Expect a fairly loose game with the Panthers taking it 5-4.