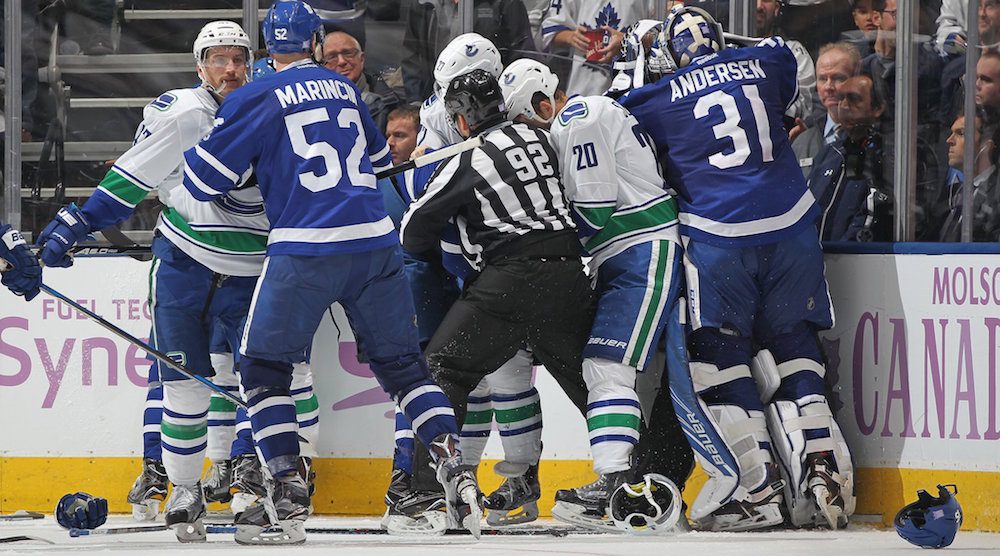 The Canucks are pissed about a 4pm start on CBC HNIC and want revenge! No, no, they are still upset about the dirty Nazim Kadri November 5th hit on Daniel Sedin. It actually could be Morgan Rielly’s hit on Jannik Hansen just before that has drawn the Canucks ire. Scratch that! Vancouver is choked that Matt Martin tried to beat up rookie Troy Stecher in that same game.

You get the point. There is no shortage of storylines for tonight’s game against the Toronto Maple Leafs.

Saturday…The rematch between the Canucks and the Leafs!
The question is…
Have we seen this movie before?
March 8th 2004!
Just saying!

Hyperbole at best from Mr. Pratt, but the buildup does seem eerily similar.

Despite all of this, the Canucks just need the two points. Well, that is what they are telling us.

The Canucks will ice a similar lineup that we saw in Thursday’s loss against the Anaheim Ducks.

The parallels between the Steve Moore hit on Markus Naslund and the Kadri hit on Daniel Sedin are obvious. These were both predatory hits on a star player.

The aftermath is not likely to look even remotely similar.

The best hope for Canucks fans is that their team comes out with some fire, plays it’s most physical game of the season, and gets a win in front of a sold out crowd at Rogers Arena.

2. What is Willie D thinking?

15:05 of ice time for Horvat, who was ventilated. But don't know that it necessitates 6 mins less than Sedins.

Bo Horvat is the Canucks leading scorer at the moment and head coach Willie Desjardins decided to underplay him against the Ducks in a game they trailed.

This isn’t an isolated incident.

Willie D has some odd player utilization trends that span well beyond this season.

Remember when Derek Dorsett seemed to be on the ice all the time with the Canucks down in the final five minutes of games last season?

It is only a matter of time before this becomes his undoing.

Short, sweet, and to the point.

The Leafs have a nice collection of young forwards in Auston Matthews, Mitch Marner, and William Nylander. They are an extremely fun team to watch. They are improving, but not at the rate many believe.

Toronto is running into the conundrum that the Edmonton Oilers have found themselves during their perpetual rebuild; how to make a good offence overcome mediocre team defence and average goaltending.

Newly acquired Frederik Andersen has been inconsistent between the pipes and the Leafs allow the second most shot attempts per game in the entire NHL.

The bottomline is that Toronto is now an exciting team to watch because they like to open it up.

This game will start out with a bang and continue to be a freewheeling and physical battle. A recipe for a great game and a Canucks loss. Vancouver simply does not have the horses to trade goals with a team like Toronto. The Leafs take this one 6-4.