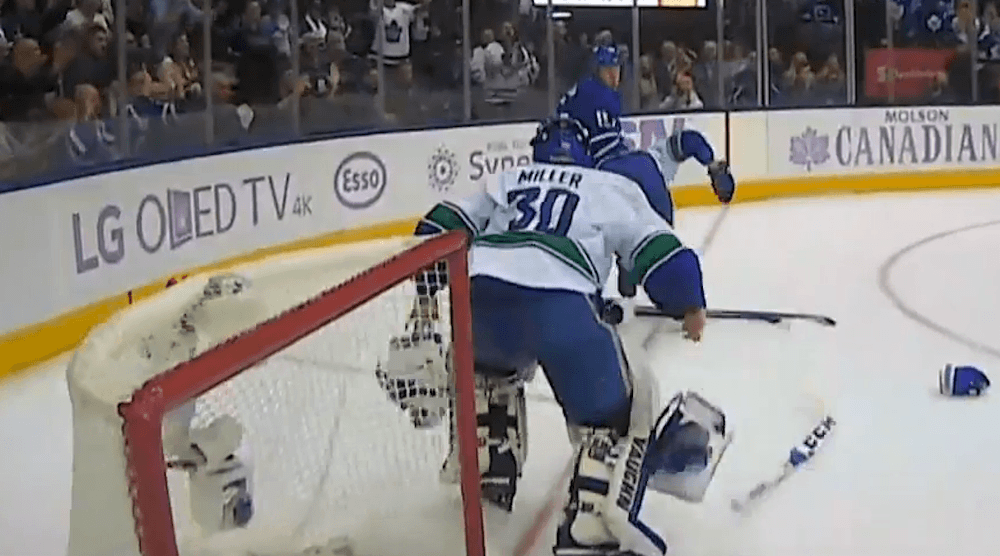 At a time when all anyone was asking for was for the Canucks to score a damn goal, it’s hard to believe they scored three on Saturday night and that’s well down the list of talking points.

The Maple Leafs beat the Canucks 6-3, in a game that ended in some old time hockey goonery.

1. OMG they scored a goal

The Canucks pulled off a minor miracle in the first period of this game: they scored a goal! It had been so long since the Canucks last scored a goal – 159:27 to be exact – that you would be excused if you forgot what to do.

Derek Dorsett (of all people) ended the drought late in the first period, scoring Vancouver’s first goal in 159:27.

It was a big goal at the time, cutting Toronto’s lead in half 26 seconds after Tyler Bozak’s goal.

Ok, now to what everyone will be talking about on sports talk radio for the next two days.

With the Leafs up 5-2 in the third period and the Canucks asleep, Morgan Rielly and Nazem Kadri woke everyone up.

The Rielly hit was fair in my eyes, given that Hansen had the puck and the hit was to the shoulder. Maybe a little late, maybe a little bit blindside, but close enough.

Now, the second? It’s a cowardly play, one that Kadri absolutely can’t make.

Daniel Sedin is winding up for a wrist shot (one that went in the net for Vancouver’s third goal by the way… You didn’t even get to cheer that one), and completely defenceless. Kadri approaches Daniel from his blindside and hits him in the head, which was the principle point of contact.

Kadri got five minutes for charging and a 10 minute misconduct for the hit.

It’s without a doubt, a suspendible hit.

Daniel Sedin returned to the game, so we have to assume he did not suffer a concussion on the play. But he certainly could have.

Kadri is a repeat offender, so I would expect a lengthy suspension.

He has been suspended in each of the last three seasons:

Taking these suspensions into account, I’d give Kadri at least eight games. But it’s the NHL, so he’ll probably get two.

3. Sticking up for teammates

When a star player like Daniel Sedin is given a cheapshot like the one he received from Kadri, as a team you must respond.

I know it sounds a bit barbaric, but that’s the truth.

Now, how you respond is also important.

The way Jannik Hansen responded, dropping the gloves and feeding Kadri with punches, was exactly what he had to do. Add it to the reasons why Canucks fans love the honey badger.

Alex Burrows on the other hand? Not so much.

Burrows responded to Rielly’s check on Hansen a few minutes later by giving him a sneaky spear to the chest. Canucks fans love Burrows – and for good reason – but this is hardly honourable.

Even if Burrows wants retribution, choosing the spear option is gutless, particularly when the game is already out of hand and he could have challenged Rielly to fight. Again, I know this is sounding awfully old-time-hockey of me, but fighting is part of the code, sneaky spears are not.

Burrows is going to give everyone under the sun who already hates him for other reasons another reason to drag his name through the mud:

Said it before but Burrows used to chirp me about being abused as a kid. Never wanted to fight though despite that or his size advantage.

While we’re on the topic of “the code,” let’s dive into what happened with Derek Dorsett.

Dorsett chose to fight Leo Komarov, who is tough and an agitator, but is not a fighter. Komarov had 40 penalty minutes last season.

Martin decided to give the Canucks a taste of their own medicine, going after another non-fighter in Troy Stecher.

The problem? This was hardly the same thing.

Komarov and Dorsett are at least close in height and weight. Stecher is 5-foot-10 and 190 pounds (and that may be generous). He’s also a kid in his fourth NHL game.

No wonder Erik Gudbranson was pissed.

Matt Martin's dead. Everyone can hear that right now..f'n dead

Gudbranson as he walked into room, past media #Canucks #CanucksOn1040

The Canucks and Leafs play each other in less than a month, on December 3rd at Rogers Arena. You can bet the NHL will be monitoring this closely, not wanting another Todd Bertuzzi-Steve Moore mess on their hands.

Despite the way they went about it – at the very least – it’s nice to see some emotion and fight out of the Canucks.

4. Ryan Miller made some fans tonight

Ryan Miller hasn’t made a lot of fans since coming to Vancouver, and it’s not really his fault.

The former Vezina winner signed a big contract. He had to follow the beloved Roberto Luongo as Canucks starting goalie. He was the other guy when the city fell in love with Eddie Lack.

Now, he’s the old/expensive goalie that many fans want to trade because they want to get younger and have faith in Jacob Markstrom.

Through it all, Miller has been the consummate pro, and has played some solid hockey behind not a poor hockey team.

What he did to protect Stecher tonight will earn him some more fans.

Full credit to Miller, who isn’t a big guy himself, for jumping in and helping out the kid.

#Canucks Miller: 'I wasn't going to let Stecher get baptized like that by Martin. It was a little predatory.'

5. Get used to looking up to the Oilers and the Leafs

Following the 2014-15 season the SixPack Godfather, Omar, ruffled a few feathers with this article that ran the headline: Canucks fans: Get used to looking up at the Oilers… And Leafs. 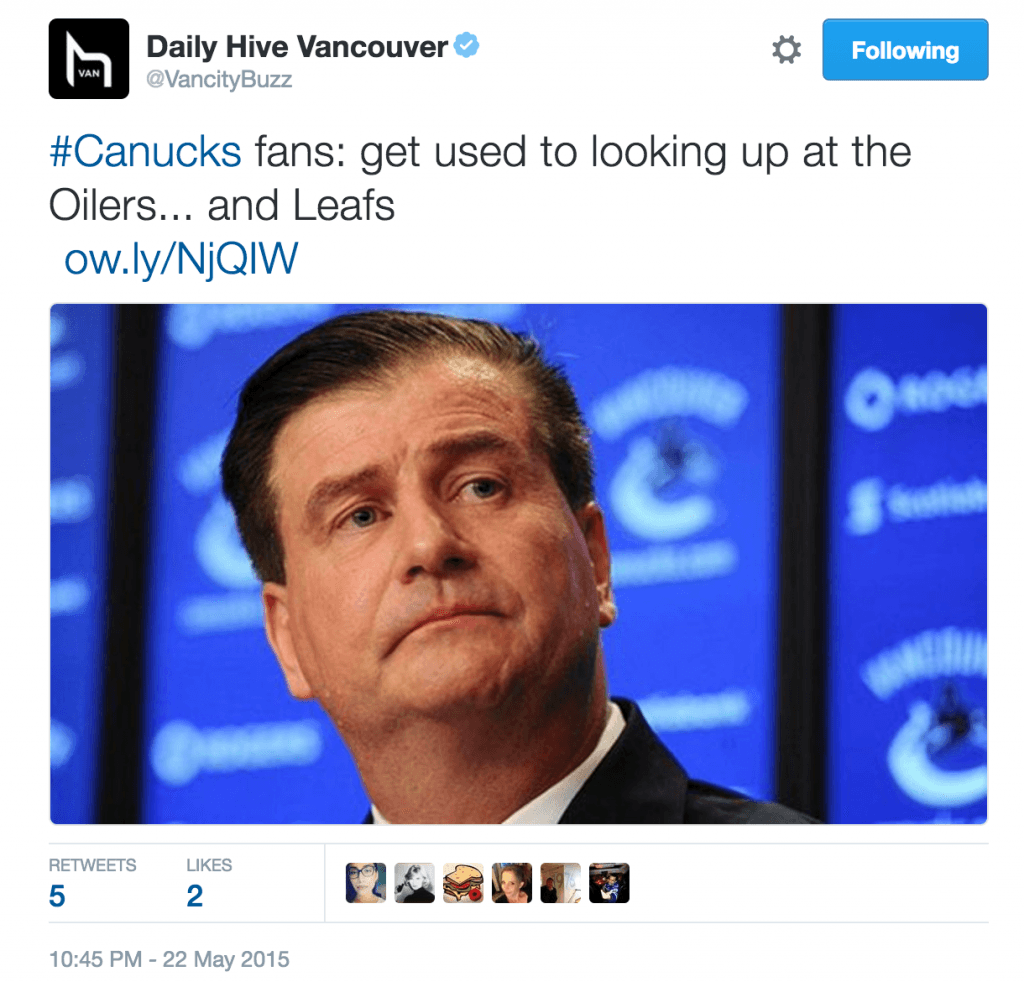 The Canucks had just had a 100-point season, and lost to the Flames in the first round. It was Jim Benning’s first season in Vancouver and although the future wasn’t rosie, it wasn’t doom-and-gloom to the average fan.

Fan response to this article was one of the most vitriol we’ve ever seen in the sports department, and that’s saying something. People on the Daily Hive Facebook Page can be candid, to put it mildly.

Here’s a selection of fan reaction to the above tweet:

“please hire someone else to write your articles that involve the #canucks. all garbage”

“This is one of the stupidest perspectives I’ve read. WPG & CGY both more successful than EDM & TOR with less sucky years.”

“this is moronic. Stop with the hockey coverage”

I didn’t agree with everything Omar wrote in the article, but his overall message was bang-on. Suffice it to say that the time has now come that the Canucks are looking up to the Oilers and Leafs.

What an embarrassment the Vancouver Canucks have become.

The losing streak has hit eight games and the Canucks just got embarrassed on national television to the Toronto Maple Leafs. I can’t imagine that ownership is happy about this.

When things go off the rails like this, something has to give. How many more losses in a row will it take for the Canucks to fire head coach Willie Desjardins? My guess is three.

For the record, I think the biggest reason for the Canucks ineptitude right now is the quality of players on the ice. Vancouver isn’t a very good team on paper, and when you take out Chris Tanev and Alex Edler, their issues are magnified.

The Canucks deserved to win in Montreal and Ottawa, but couldn’t score. That’s not on the coaching staff.

Giveaways by Canucks defencemen are not on the coaching staff.

You can second guess a lot of the deployment by Desjardins, including stapling Jake Virtanen to the fourth line. You can second guess his refusal to play the matchup game which resulted in Auston Matthews’ line getting to play against Luca Sbisa and Philip Larsen until (presumably Doug Lidster) decided to shake up his defensive pairings in the second period.

This losing streak is a team effort, and the coaches have to share responsibility. But the problem runs deeper with this team.

It’s far easier to can the coach than trade the players, so if they don’t turn things around, we may see a different coach behind the bench before these two teams play each other again next month.