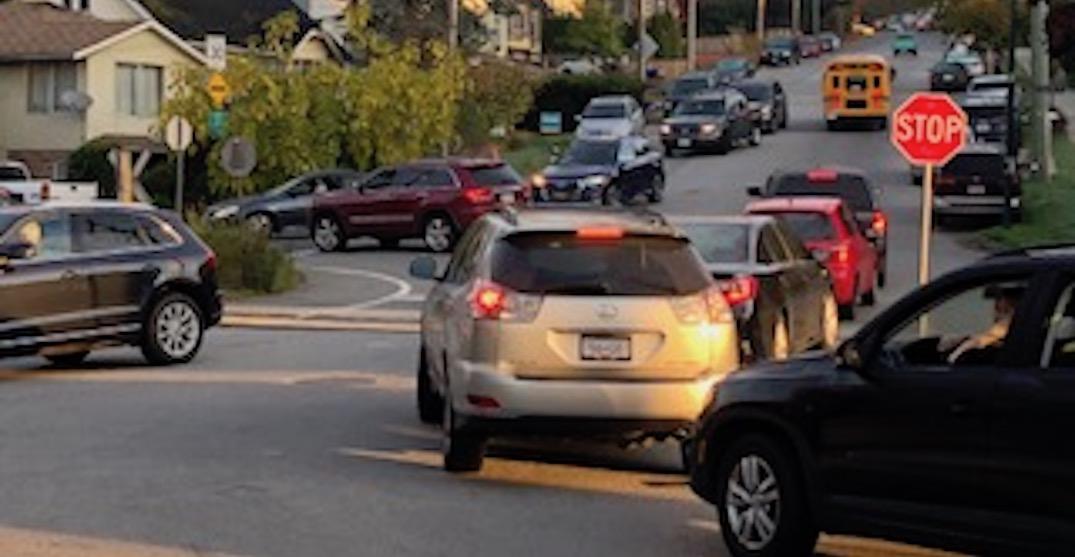 Vancouver is a city that is no stranger to traffic jams, but one particular area in the Fraserview community is being hard hit because of drivers trying to take a shortcut.

Motorists trying to avoid congestion on Southeast Marine Drive will detour down on to East Kent Avenue South, using Victoria Drive — which is the cause of the major traffic jams in the area.

“I’ve definitely been a thorn in the side of the city,” she said.

Accidents on Southeast Marine Drive, traffic on the Knight Street Bridge and even just the rain, can all play into the traffic nightmare on East Kent Avenue South, specifically at the Victoria Drive intersection.

Must be something happening on SE Marine Dr. Our side streets cars, cars & more cars pouring through. pic.twitter.com/1g8aw8FQhO

The City of Vancouver says they are aware of the traffic concerns in the Fraserview neighbourhood and are working to address the issues. They’ve added parking spaces east of Argyle Street to reinforce Kent Street South as a residential street.

Speed bumps were also added east of Victoria Drive but were funded by residents in the area. 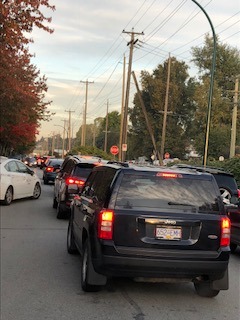 Borchardt says the city also put in a dedicated turning lane and light a couple years ago, to ease the traffic on Elliot Street on SE Marine Drive, but that now allows nine to 10 cars through the intersection.

“Once they put that light in, that just added to the volume – and people were like ‘hey, this is a great shortcut,” said Bordchart.

What Borchardt doesn’t understand is why cars are not going up to 54th or 49th Avenue, to try to potentially get around some of the backup.

The limited amount of sidewalks and mounting frustration from drivers in the area is also not helping the traffic situation.

“When there are back ups I’ve asked cars to politely move so my neighbours can get out of their driveway and I get nothing but snarky comments and aggressive behaviour in reply.” says Borchardt. 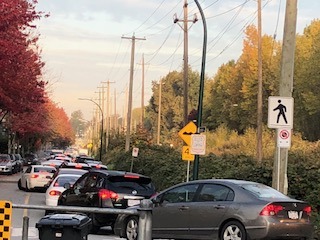 Speeding is also a major part of the problem

Anytime on Southeast Marine Drive when you’re doing 70 km, you’re usually being passed, despite the speed limit being 50 km in that area, says Borchardt.

After Borchardt reached out to the Vancouver Police Department about the traffic situation, she was pleased to find that they acknowledged the problems and were ticketing in the area almost immediately.

“In response, we have increased traffic enforcement in the area and plan on continuing this enforcement,” said VPD sergeant Jason Robillard.

Having VPD in the area for ticketing acts as a deterrent, but is not a permanent solution says Borchardt.

Sergeant Robillard also said that in 2018, there were 11 collisions and 36 tickets issued for speeding within a two block radius between East Kent Avenue and Victoria Drive.

“There are parents driving their kids to school, at high speeds, blowing through the stop signs and I’m thinking you’re putting your children’s lives at risk and you’re setting a really bad example,” said Borchardt. 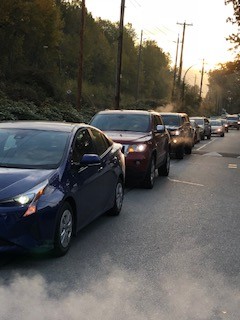 Borchardt added that she has lost count of the number of times she has contacted the city.

“The City is working to ensure a holistic approach to neighbourhood traffic calming, as measures to address concerns in one area can often push the issue onto an adjacent street or neighbourhood,” said City of Vancouver Engineering Communications Coordinator Maria Bekiaris.

On top of everything, there is currently no transit service down to the new River District development located within the Fraserview community. There is now a proposed route to the Canada Line from River District.