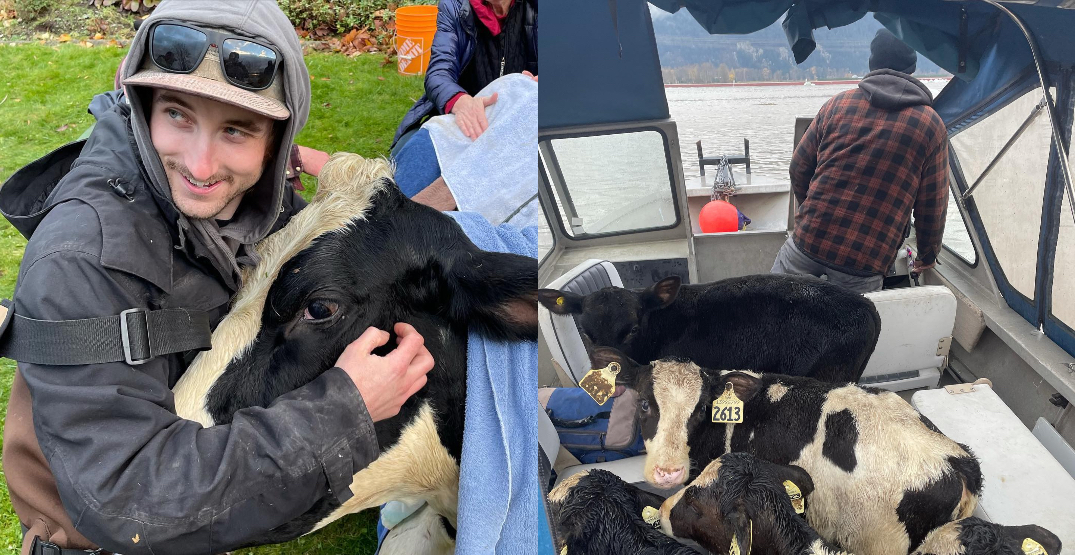 Amidst flooding in the Fraser Valley, locals are stepping up to help save animals who got left behind.

Daily Hive spoke with Brad Mueller who’s been volunteering in the area doing everything imaginable to help locals from his fishing boat.

Brad is the owner of BRN Electric and lives in Yarrow – a community adjacent to Chilliwack and nearby Cultus Lake.

“It’s hard to understand how tight-knit of community this is. You get people that have never met each other and they’re helping each other like they’re best friends or family,” he said.

When Daily Hive reaches him, he’s standing in hip-waders in four feet of water, on a farm he has no connection to, surrounded by other strangers all there to help.

“We’ve been doing everything from rescuing calves to transporting water to buddies who own dairy farms and helping move chickens out of flooded chicken barns,” said Brad.

On social media, his posts of rescuing stranded calves have received a lot of attention.

Sadly, there are many animals that weren’t able to be saved.

Brad said that he’s in damage control mode to help out amidst the “mass devastation” he’s seen on farms.

“Farmers are just desperate to move their livestock in a hurry and try to mitigate loss of life,” he said. “They can’t handle seeing the distress that their animals are in.”

“All we’re trying to do is save as many as we can and while we can,” he said.

According to Transport Canada, recreational boating in flooded areas is prohibited but boaters who are helping to rescue cows are allowed.

Many cows in Abbotsford have been affected by the flooding as the city urged farmers to leave them behind if they were evacuated, particularly in the flooded Sumas Prairie region.

The Vancouver Humane Society announced on Saturday, November 20 that it would help provide financial assistance and veterinary care to those affected by the flooding.

B.C. Agriculture Minister Lana Popham said in an update from the province on November 20 that there were close to 70 vets that were standing by to assist farmers.

“Everyone’s just one big family right now, and it’s amazing to see how a community can band together in desperate times,” said Brad.

You can learn more about helping animals affected by the flooding and find out what you can do to support affected communities.