A long-running, upscale hospitality staple in Metro Vancouver will shutter its doors later this month, after it decided in 2018 that it would not renew the lease for its hotel.

Four Seasons Hotel Vancouver is set to host its last guests on January 20, 2020, ahead of its deadline to to vacate the premises — owned by Cadillac Fairview (CF) — by the end of the month.

The 305-ft-tall, 30-storey hotel tower with 372 guest rooms is part of the CF Pacific Centre complex, and the only property that the Four Seasons Hotels and Resorts chain owns and manages in the world.

In late 2017, details of a lawsuit between CF and Four Seasons emerged, with the commercial property owner alleging the hotel failed to modernize its facilities and equipment in line with newer luxury properties in the city, specifically mentioning the Rosewood Hotel Georgia, Shangri-La Hotel, Fairmont Pacific Rim, and Fairmont Waterfront as benchmarks. As a result, CF further alleged that the hotel was in breach and default of its lease agreement.

Four Seasons rejected the claims, asserting the hotel continued to experience a strong performance and has a four diamond rating by the American Automobile Association. At the time of the lawsuit’s filing, the Vancouver property was just one of six Canadian hotels with a recent five-star rating by Forbes Magazine.

In their response, the hotel went on to accuse CF of seeking millions of dollars in renovations and refurbishments for the benefit of both the property owner and any potential future replacement tenant. The hotel’s last renovation occurred in 2010.

This dispute began in 2015, and eventually became a matter for the court.

The closure of the Four Seasons comes at a time when Vancouver is experience a shortage in guest rooms — falling well behind the rising demand from the city’s growing tourism industry, which is reflected by record passenger numbers at the airport and cruise ship terminal.

While new hotel properties have opened in recent years, particularly the two Marriott properties with 517 guest rooms at Parq Vancouver, as of 2018 there was a net loss of over 1,000 rooms in Vancouver — especially with the lower-market options — largely due to residential redevelopments. In fact, Vancouver currently has fewer guest rooms than the period when it hosted the 2010 Winter Olympics.

Four Seasons intends on reopening a Vancouver presence at some point in the future, but it has yet to make an announcement on a location. Rumours in 2019 of the Four Seasons taking over the Trump International Hotel & Tower Vancouver are unfounded.

CF has also made no indication of its future plans for the hotel tower and podium — whether it will be renovated or demolished. The hotel property accounts for a significant portion of the mall complex; a retrofit or redevelopment of the site could potentially accommodate a mix of uses, such as a new hotel, office space, and an expanded mall.

In July 2019, City of Vancouver staff approved CF’s development application to redevelop the mall rotunda at the northeast corner of the intersection of West Georgia Street and Howe Street — the glass dome and plaza immediately south of the hotel — into a 14,000 sq. ft., two-storey pavilion retail building that includes a flagship Apple store. 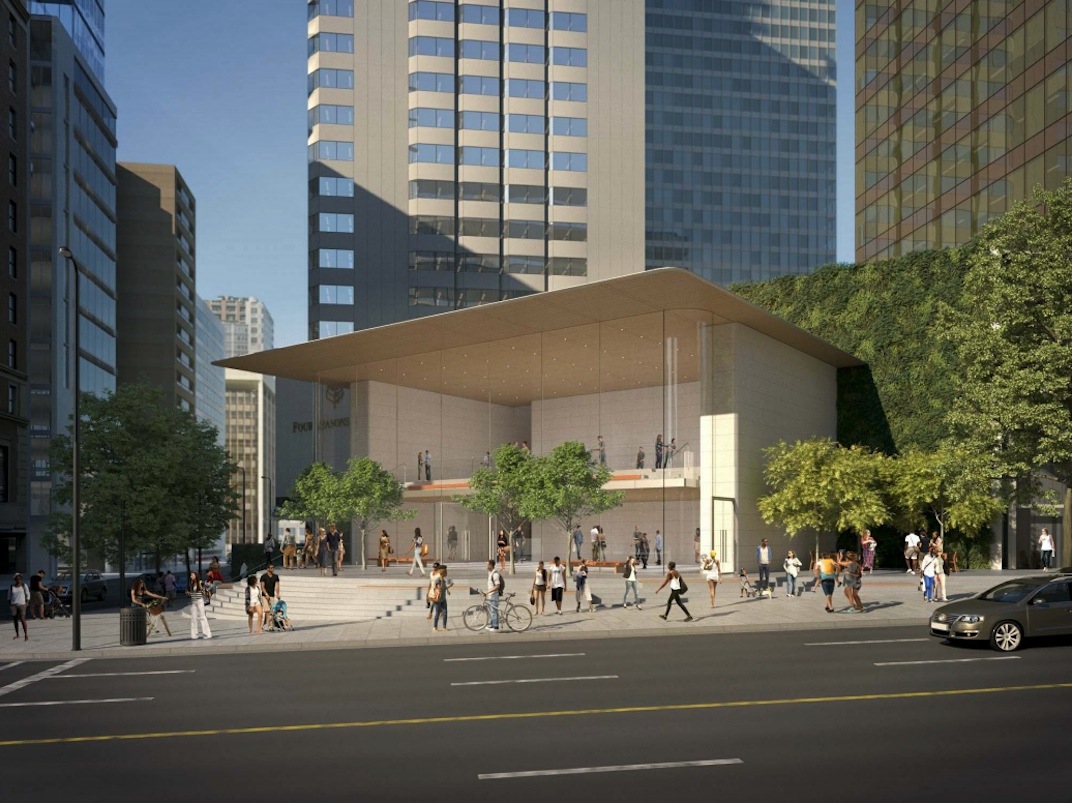