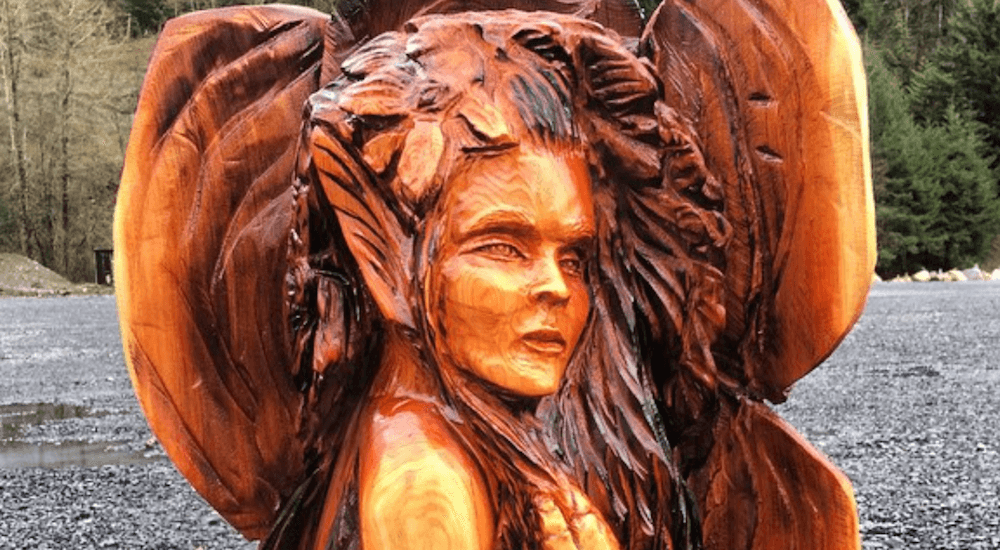 Artists from around the world are getting ready to showcase some unique and innovative pieces at Art! Vancouver. This annual celebration of art will grace the Vancouver Convention Centre from May 25-28.

One of the featured artists will be local BC boy, Ryan Cook, who uses chainsaws and a variety of hand tools to turn raw wood into unreal sculptures. 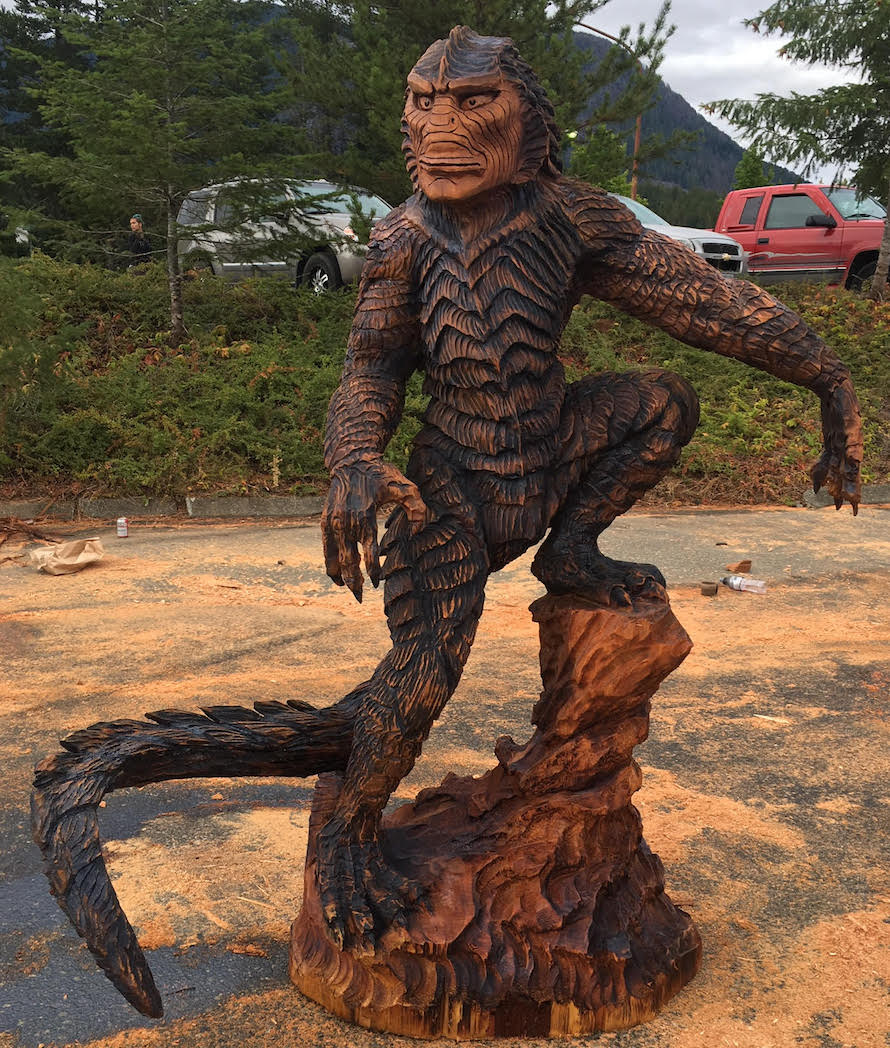 After growing up in Britannia Beach near Squamish, Cook made his way to LA to pursue an acting career, which included a stint on reality smash hit The Hills. When Cook returned home, he auditioned for another TV show, Saw Dogs, which was set to film in nearby Squamish. While it also happened to be a reality show, Saw Dogs was a complete departure from The Hills.

Saw Dogs was the first time Cook was exposed to the art of wood carving. “I didn’t really know how to run a chainsaw. I just BSed my way onto the show,” admits Cook. “So basically for the four months we shot the show, I was the butt of all jokes. But during that time, I totally fell in love with wood carving.” 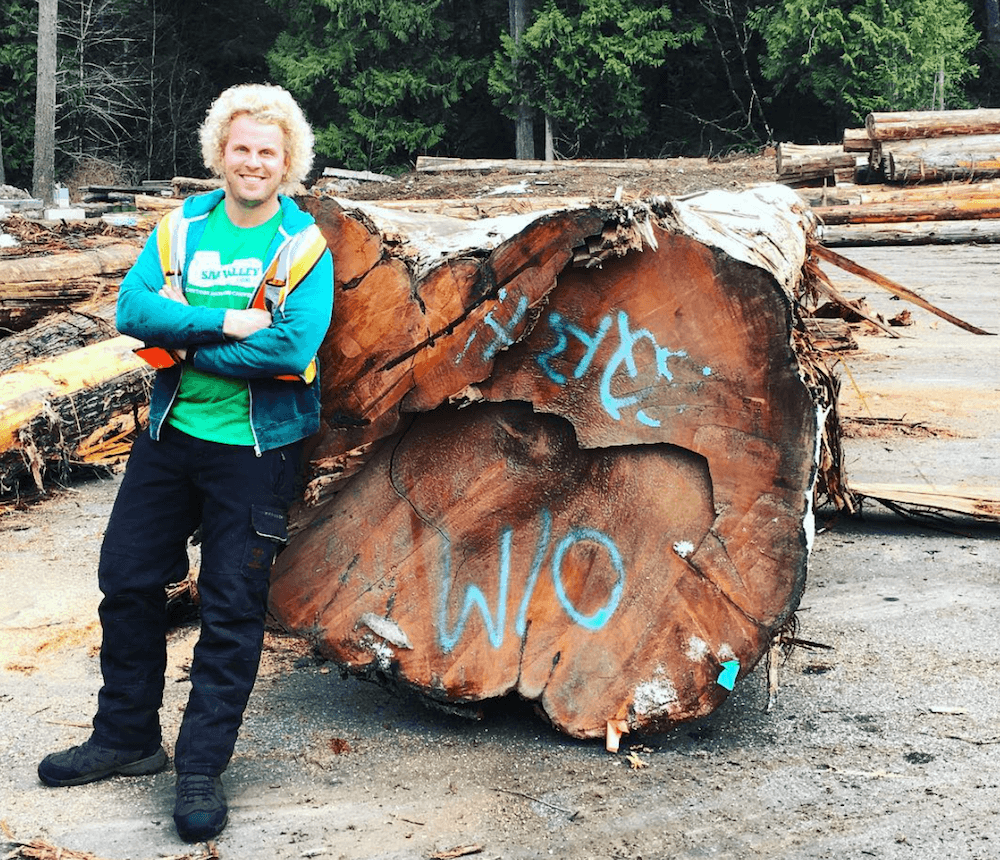 Cook knew that wood carving was something he wanted to seriously pursue, so he studied with a variety of mentors after Saw Dogs wrapped up. He quickly rose up the ranks to emerge as one of Canada’s top professional wood carvers. His path would eventually lead him to be cast in another reality show, Carver Kings.

This time he wasn’t the butt of any jokes. Cook got to showcase his talent and creative ideas on Carver Kings, and soon gained cult celebrity status. He has since enjoyed a successful career and is constantly busy with sculpture after sculpture. 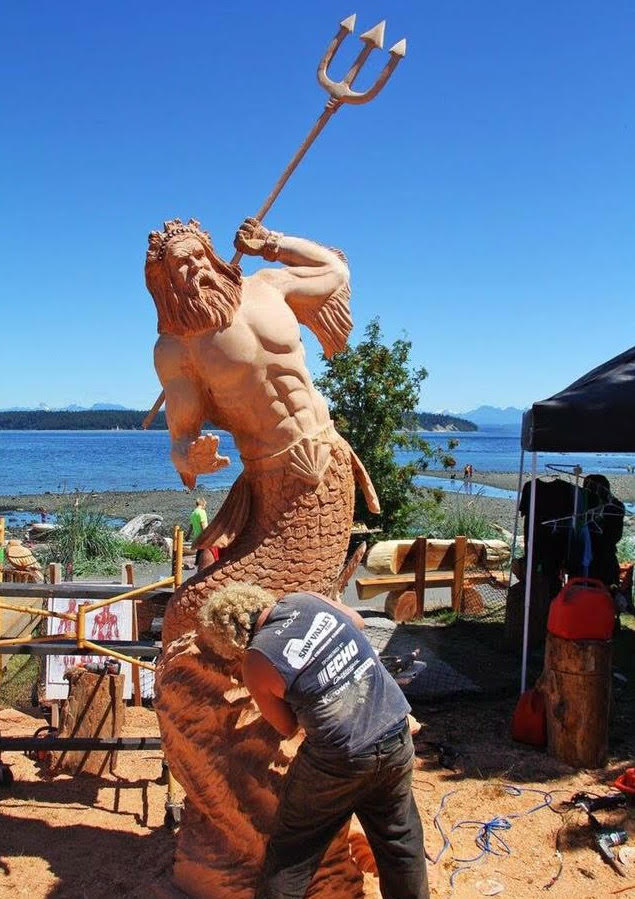 Cook lives in Vancouver and drives to his workshop in Squamish five days a week. It’s a huge commitment, but it’s also necessary for the artist to work in an isolated area, where he can run chainsaws all day without getting noise complaints.

While Cook’s creations include furniture and human figures, a lot of his work involves animals – especially fantasy-themed creatures. These include dragons, Greek mythology characters, and beings that look like they just stepped out of Game of Thrones or The Chronicles of Narnia.

Cook will often also pay homage to his BC roots by sculpting local animals such as bears, wolves and eagles. 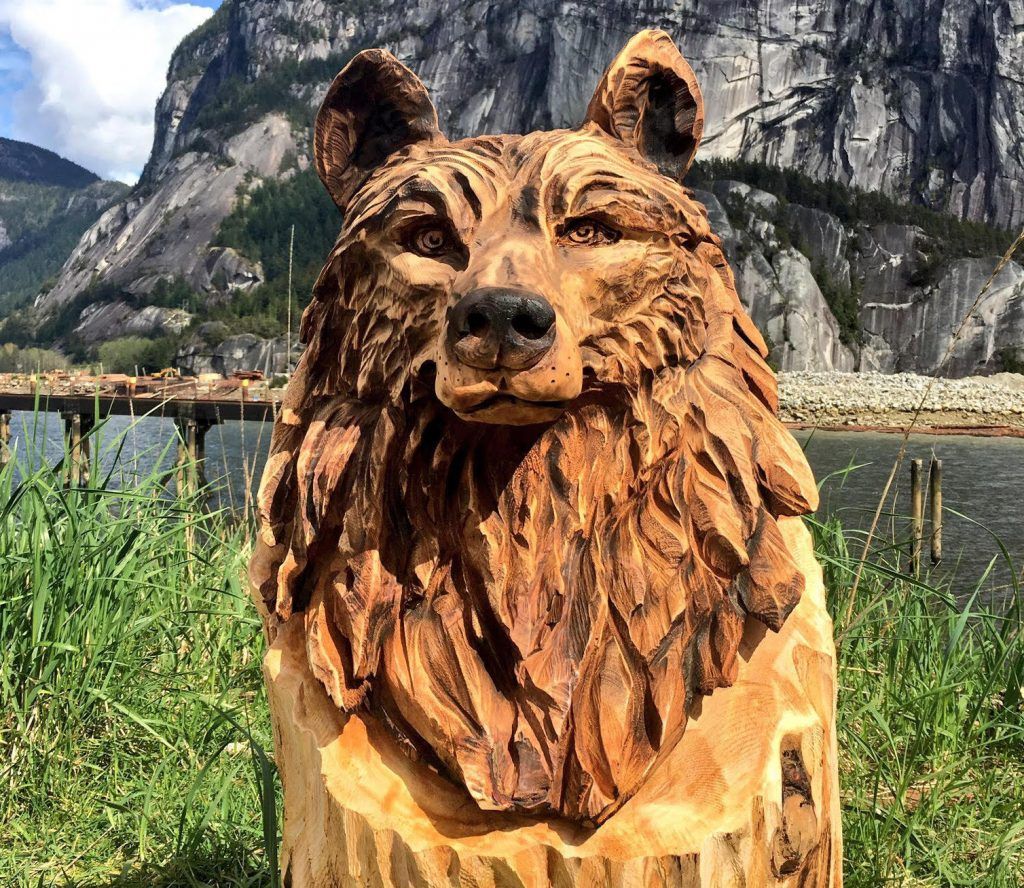 “I also do memorial pieces,” adds Cook. “My next big commission is a bench for a woman whose husband just passed away, and the bench is in memory of him. I never thought in my life I’d be doing something like this. It’s never the same thing twice.”

One of his works that Cook considers very meaningful is a sculpture he carved of his stepfather. “My stepdad was a volunteer firefighter for 40 years. To pay tribute to him, I sculpted him as my piece for the world championships.” 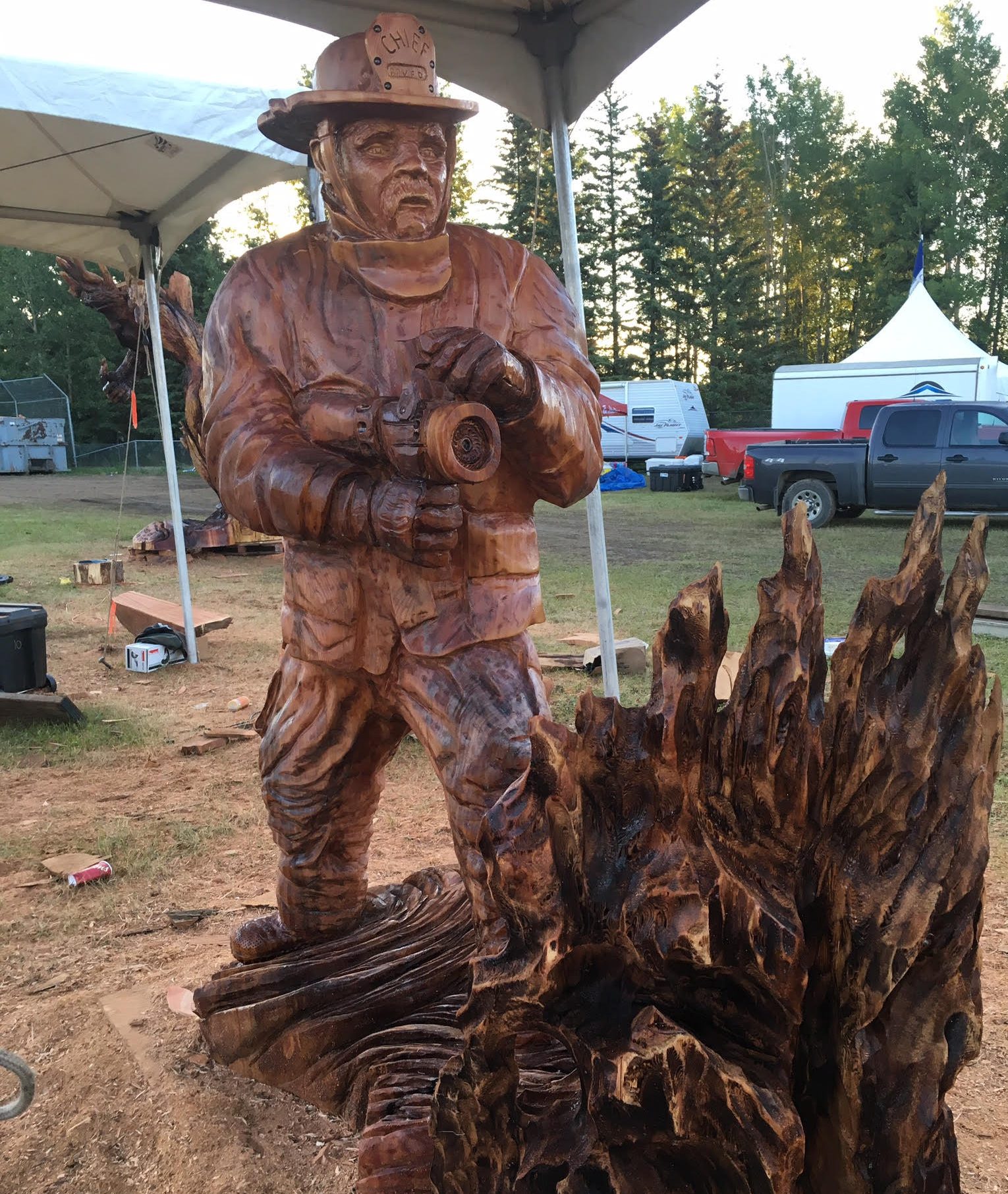 “We raised $1,000 from that boot for the Red Cross, so that was pretty awesome,” recalls Cook. “And I think I did a pretty good job of carving my stepdad in his firefighter’s outfit. When he saw it, he started to cry because it had so much meaning.”

Ever the diverse artist, Cook has done a number of fruit carving segments on local TV. He’s also recently broken into the ice sculpting scene and has been commissioned to do carvings at numerous festivals around the world. 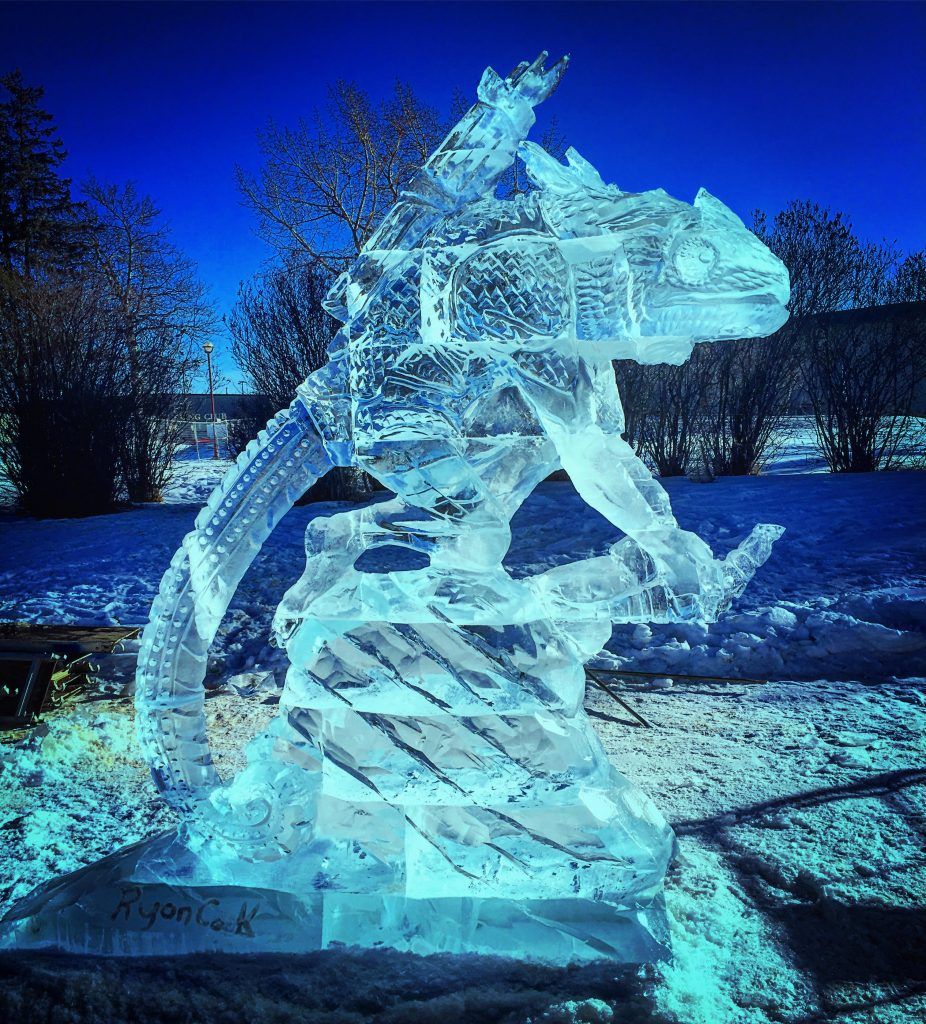 Cook is currently focused on preparing for Art! Vancouver. He plans on showcasing a number of Canadian-themed art pieces at the event to help celebrate Canada’s 150th anniversary.

Cook is also having his own personal celebration at the moment. He recently became a father for the first time to a baby girl. Watch for his “new dad glow” at the show.

Daily Hive is a proud media sponsor of Art! Vancouver.