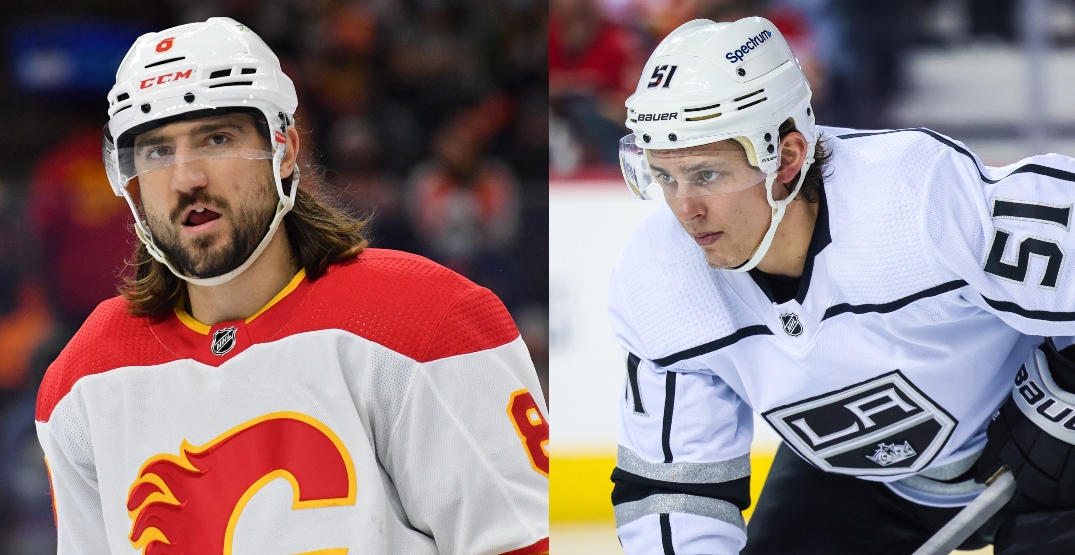 The playoffs are set to begin on Monday.

Will you be cheering for any former Vancouver Canucks to hoist the Stanley Cup?

There are 20 former Canucks in total who played NHL games for playoff-bound teams this season.

Based on the rules to get your name on the Stanley Cup, we’re going to focus on 12 of them here.

There are two main requirements to get your name on the Stanley Cup. A player must have dressed in at least 41 of 82 regular-season games for his team, or one game in the Stanley Cup Final.

The winning team can also petition to have players who fall outside of those qualifications on the Stanley Cup. Every year, the champion can have 52 names engraved on the Cup, including players, coaches, staff, and management.

It’s no surprise that the Calgary Flames have more former Canucks on their team than anyone else entering the Stanley Cup playoffs.

Of course, the longest-tenured former Canuck on their team is none other than Chris Tanev.

It wasn’t a huge shock when Tanev departed Vancouver during the 2020 offseason. He had a lengthy injury history and his defensive effectiveness seemed to be dwindling.

Well, during two seasons with the Flames, Tanev hasn’t missed a single game and he’s still one of the best defensive defencemen in the league.

Similarly to Tanev, it wasn’t a surprise to see Jacob Markstrom depart during the infamous 2020 offseason.

His departure has been softened by Thatcher Demko’s brilliance but nonetheless, Markstrom has been lights out for the Flames.

The 32-year-old’s nine shutouts led the NHL this season, and some oddsmakers have him with the second-best chance of winning the Vezina Trophy.

It’s only fitting that Tyler Toffoli ended up with the Flames.

The Canucks most mind-boggling subtraction from the 2020 offseason ended up being the first big name to be traded this season when he went from the struggling Montreal Canadiens to Calgary.

With 11 goals and 23 points in 36 games, Toffoli has found a home on Calgary’s second line with Andrew Mangiapane and Mikael Backlund.

Now with his fifth NHL team since departing Vancouver in 2019, Erik Gudbranson has found a home on Calgary’s third pairing.

The Canucks franchise leader in most categories among defencemen will get one of his final cracks at winning the Stanley Cup this season.

Alex Edler was hit by the injury bug this season, as a fractured ankle kept him out for three months.

When he was in the lineup, Edler was an effective bottom-pairing defenceman who posted 19 points in 41 games.

There couldn’t have been many guys who were happier on trade deadline day than Troy Stecher.

The Richmond, BC native only played 16 games with the Detroit Red Wings this season after being sidelined with a wrist injury. Since being acquired at the deadline, he’s been reunited on a pairing with Edler, his old blueline partner in Vancouver.

How do you feel about cheering for a rival to win the Cup?

Most former Canucks who have a shot at a championship play in the Pacific Division, including Zack Kassian.

The 31-year-old has seen his role diminish over the past two seasons. So far this season, he’s posted six goals and 18 points in 57 games.

The only former Canuck on this list to win a Stanley Cup might also be the biggest longshot to get his name on the trophy this season.

Not only are the Dallas Stars likely to play the Flames or Colorado Avalanche in Round One, but Holtby himself has been on injured reserve since March.

If the Minnesota Wild were to win their first Stanley Cup, Victoria native Jordie Benn falls just short of the threshold in order to have your name on the trophy.

He has been a regular in Minnesota’s lineup of late though. Benn has one goal and eight points in 39 games this season.

If the New York Rangers go on a run, there’s a good chance they do it without Tyler Motte.

The Canucks lone true selloff at the trade deadline suffered a “significant” injury back on April 8th, with head coach Gerard Gallant saying “I just heard he’s out for quite a while.”

The Huntsville, Alabama native’s career looked like it was going nowhere when he played for the Canucks back in 2017-18.

Since then, he’s truly found a home with the Washington Capitals.

Now in his fourth season in Washington, Dowd set a career-high this season with 24 points in just 63 games.

Although Gustav Forsling never played a game – or even signed a contract – with the Canucks, we’re including him since he feels like a player who got away.

The 2014 fifth-round selection of the Canucks has been found money for Florida. He’s set new career highs with 10 goals and 37 points, and Forsling also leads all Panthers skaters with a +41.

Other former Canucks with a shot at the Cup

The eight players listed here aren’t close to the current threshold for having their names on the Cup. However, all of them played at least one NHL game this season and they could earn a shot at playing games if injuries hit their respective squads.