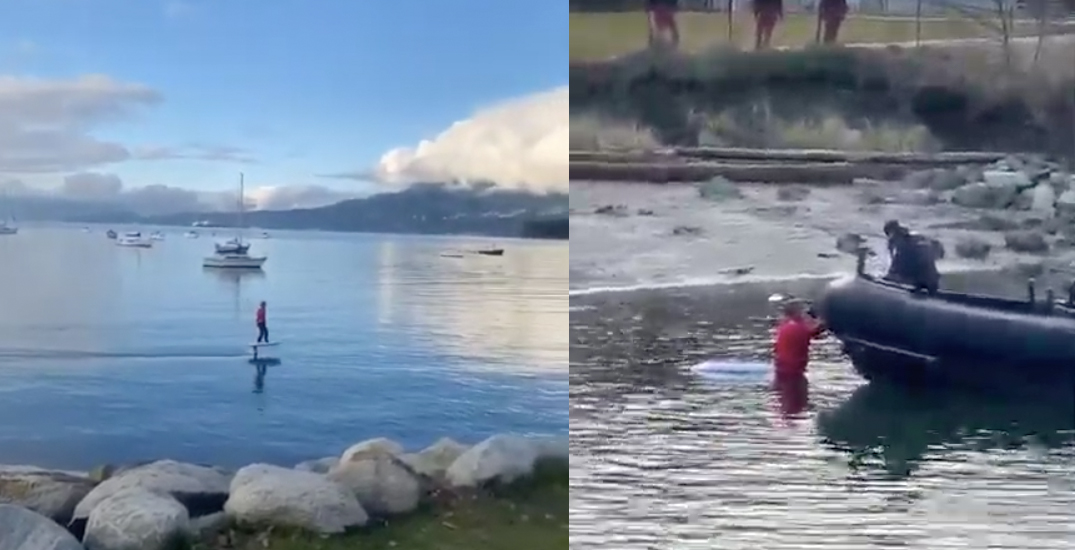 Video obtained by Daily Hive staff shows a man in a red jacket using the board to scoot over the water near the Vancouver Maritime Museum.

But his fun is cut short when police pull him over.

As the man stands in waist-deep water talking to police, you can see there’s a post attached to the board with a propeller at the bottom. While in use, it appears the board is hovering over the ocean’s surface.

“Officers are investigating the use of a self-propelled prop driven foil board which is not authorized for use in Canada,” Sgt. Aaron Roed, a VPD media relations officer, told Daily Hive.

Marine officers confiscated the board and turned it over to Transport Canada for “further inspection,” according to Roed.

The rule is meant to protect other people, such as swimmers nearby, from being injured by the propeller.

Adding non-motorized “foils” to lift boats and boards into the air has gained popularity in sailing, surfing, and kiting communities in recent years, according to Stephen Zeni, a Toronto-based manager at retailer BoardSports.

Pro surfers have been doing it in Hawaii since the mid 1990s, Zeni said, but flying on foils became more popular after sailors used them in the 2013 San Francisco America’s Cup regatta.

Foiling, as it’s called, adds another dimension to sports like wake boarding and kite surfing, Zeni explained. It brings in piloting variables like worrying about the board’s pitch or yawn, and requires expert balance.

Motorized foilboards, or efoils, like the one the man in Kitsilano was using can cost more than $10,000. Zeni said most brick-and-mortar retailers, including BoardSports, don’t stock them because they’re so pricey.