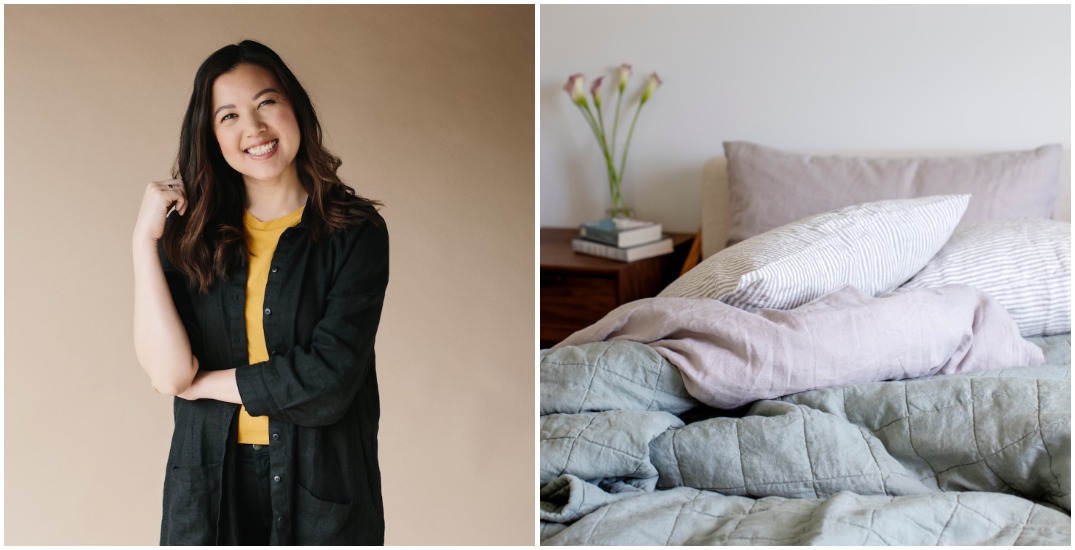 When it comes to bed sheets, linen is just better.

“We all became friends because we were hanging out at the Bel Café, which was where my [co-founder] Anna managed,” remembers Vivian, who was a practicing lawyer before launching Flax Sleep.

She and Oana had known each other from law school, and got to know Anna at the café and her subsequent craft events. 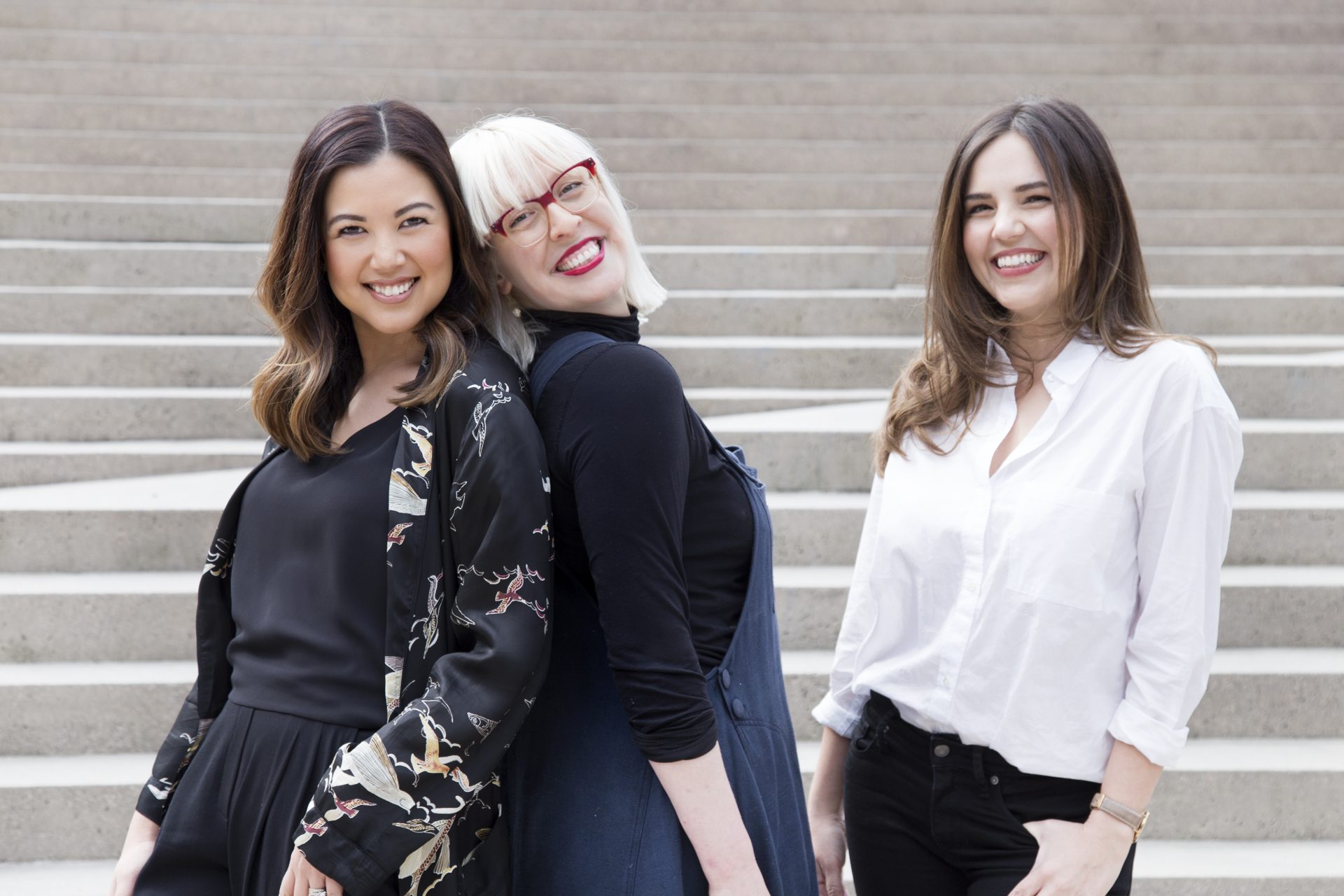 The idea for the direct-to-consumer brand came to fruition after Anna purchased a new bed and a mattress but wasn’t finding what she needed on the market for bed sheets.

“When it came to bedding, she wanted linen because it wasn’t too hot to sleep in, and it was breathable,” Vivian recalls, noting that Anna was someone who understood fabrics and textiles intimately.

There’s no high thread count here at Flax: linen goes by weight (and for those still confused about the definition of high thread count, the term refers to how “tight” the weave of the fabric is). 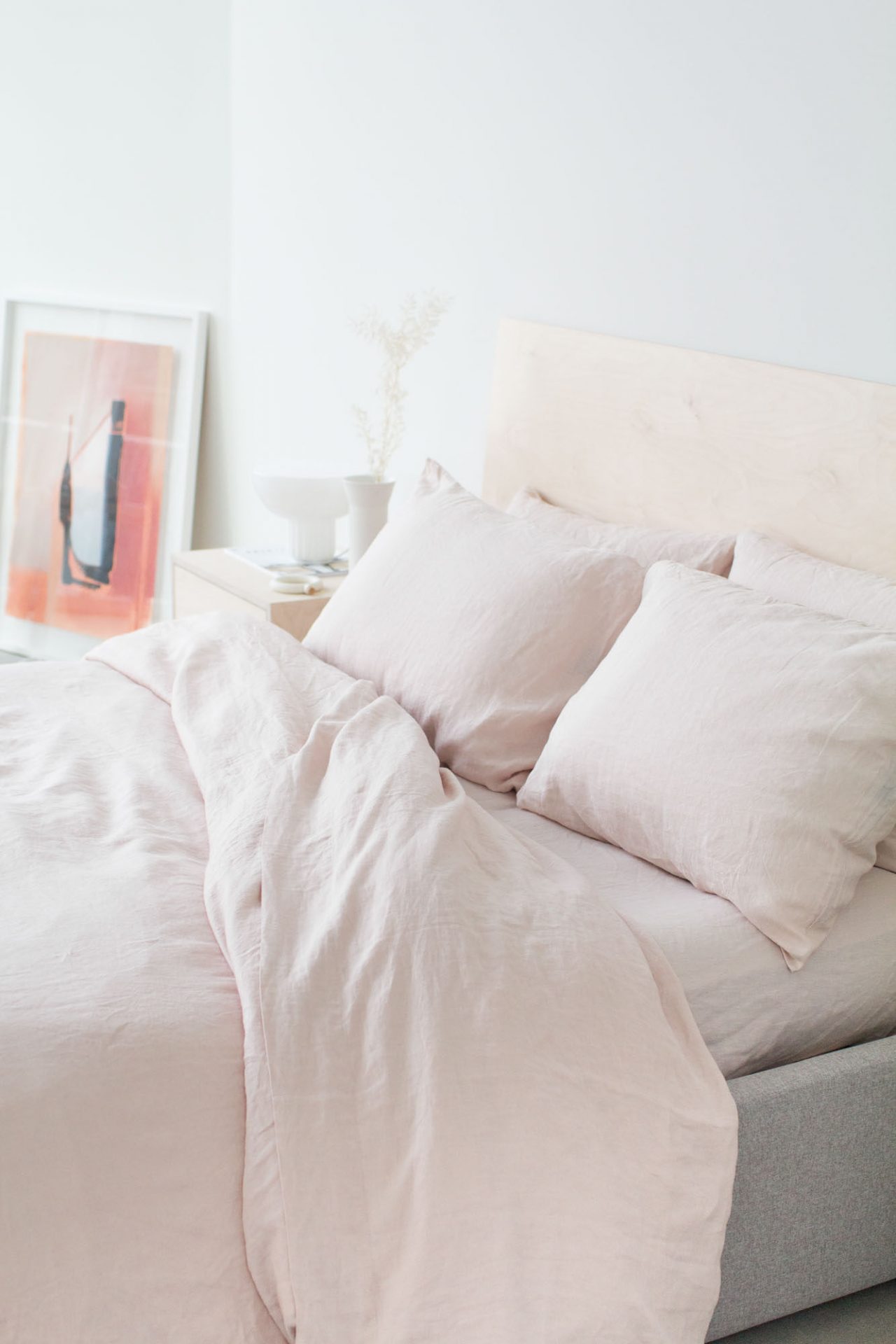 “Anna knew she liked linen as a wearable…but for sheets, when she looked that up, you could only get them from outside the country.” Add up the taxes and the shipping, and one may as well walk into Restoration Hardware to buy an ultra-pricey set.

“When she brought this idea to [Oana and I], we were like, ‘Why don’t we just make them and sell them to other people?'” And from there, Flax Sleep was in motion.

The name has a smart tie-in, too: linen is made from flax plants, which use way less water than other plants, making them more sustainable, Vivian explains.

As a lawyer, the UBC graduate already had a hand in the entrepreneurial space through her job at the Business Development Bank of Canada. 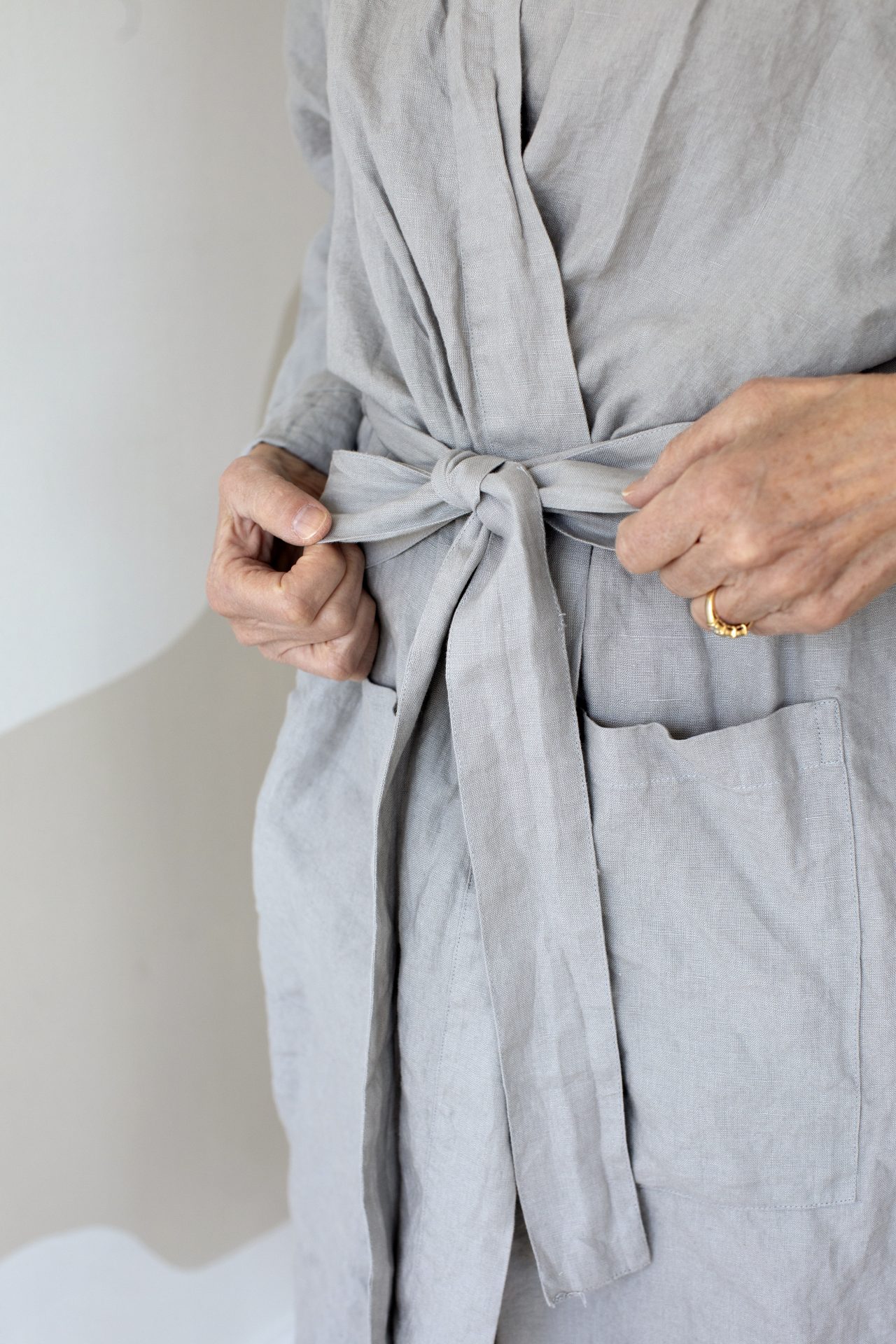 Working for the bank in a legal capacity, Vivian saw the challenges many entrepreneurs were facing, especially when it came to the money side of things. Eventually, the Surrey native left law to see if she could help entrepreneurs to improve their operations and set them up for success.

“A lot of time, people come to borrow money when it’s too late. And then they also don’t have what they need… That’s when companies run out of cash,” she says point blank.

Getting Flax off the ground was a culmination of Vivian applying her law background, business degree, and experience with both the BDC and consulting with entrepreneurs.

“It’s kind of like that thing where, if you want to coach, you probably should play at some point,” she says. “I needed to start a business. I needed to learn about what the ins and outs of running a business are like before you try to help more people who are running their businesses.” 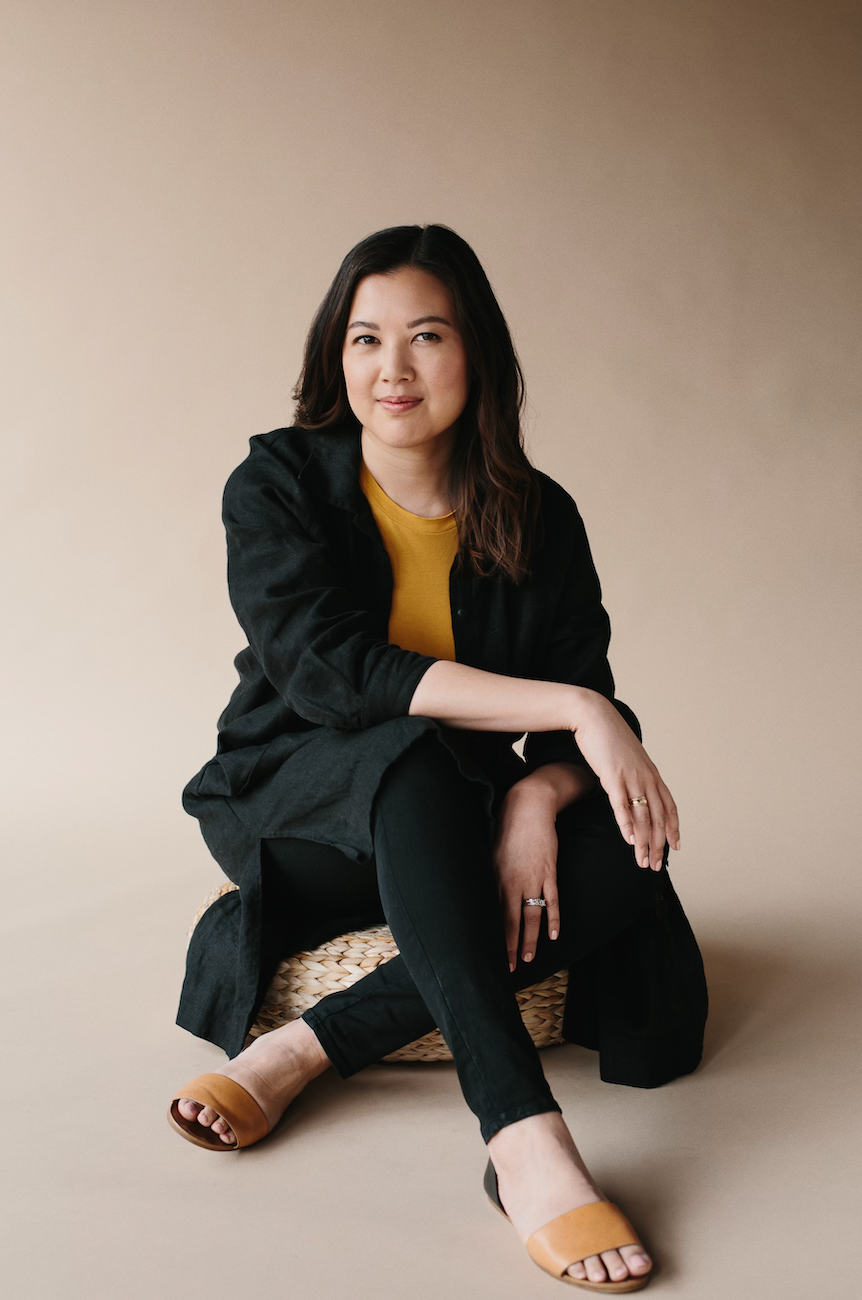 Despite not knowing anything about the bedding world (except trying to avoid the same “plastic-looking bag” options at every department store), Vivian, Anna, and Oana were all-in to make Flax a reality.

Online sales were already top of mind after both Anna and Vivian bought Endy mattresses in 2017, which Vivian thinks “elevated” the digital shopping space.

“We were getting into this online buying of things that you would never really buy online…I was ‘adulting’ and thinking, I’m sleeping on such a good mattress, but what’s between me and the mattress?”

Next up, the three women wrote a business plan and sought out funding at the Women’s Enterprise Centre in Fairview. 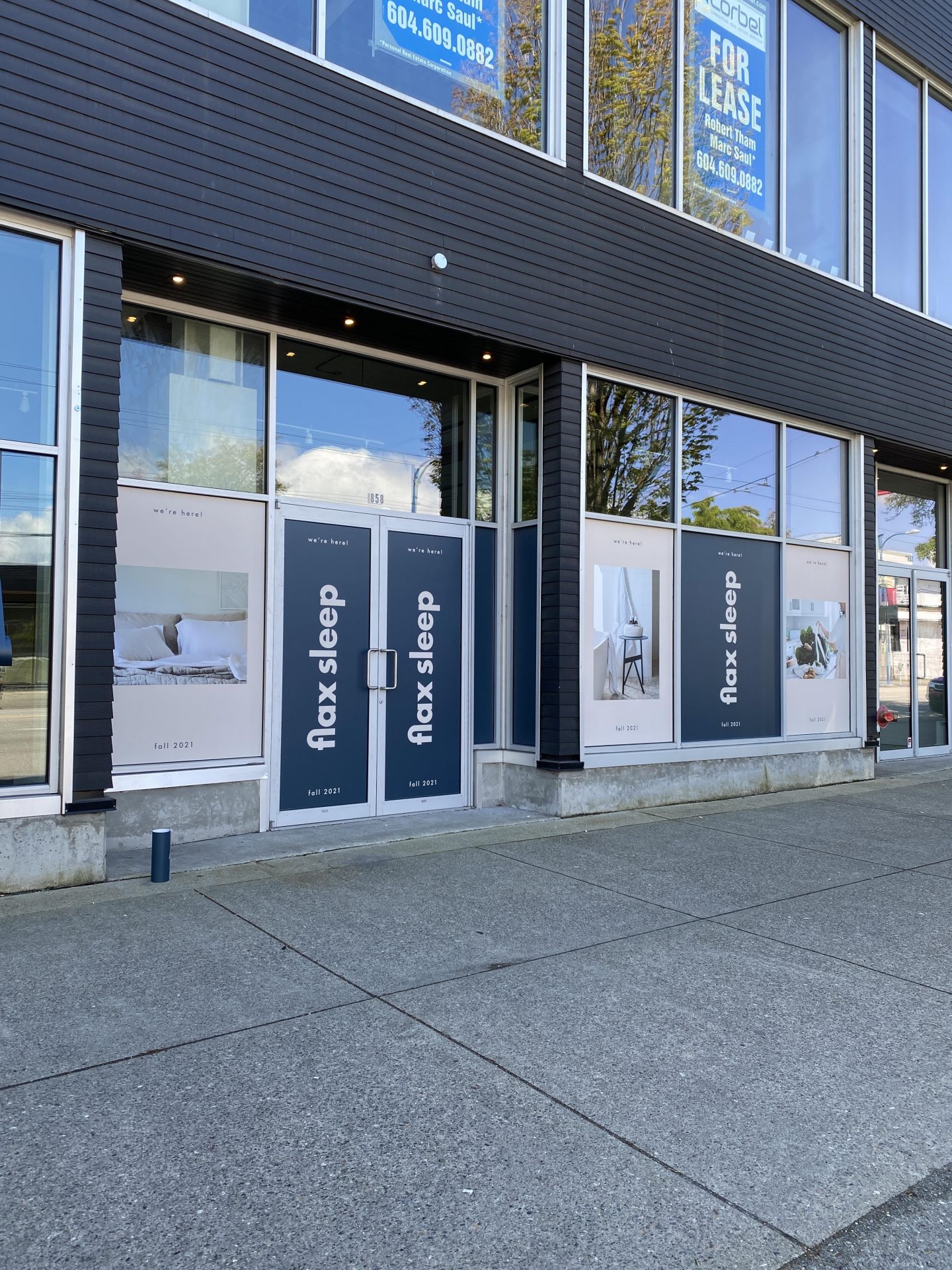 “I tell entrepreneurs that now: if you’ve got a good idea, someone’s going to lend you the money to do it,” Vivian advises. “You need to write a business plan, you need to read a cash flow plan, and you need to bring it to someone who has the money to help you leverage.”

It wasn’t an easy process for Vivian, Oana and Anna (the WEC “put us through the wringer,” Vivian confesses), but she says the organization, which lends money to women in BC and across the country, asked some tough questions that helped them improve their original business plan.

By January 2018, the trio was off to Hong Kong for a quick trip (all three were still working full-time jobs) to visit a potential manufacturer in China.

“I knew nothing about how clothes were made, where they were made, what the fabrics were,” Vivian recalls, noting that most people still thought of linen as something to wear but not to sleep in.

“We had a driver take us across the border into China to see our factory. We found these people and we ordered samples we came to love,” she explains. Most importantly, Anna, Vivian, and Oana were in agreement that they were not going to sell anything that they hadn’t properly researched and loved. 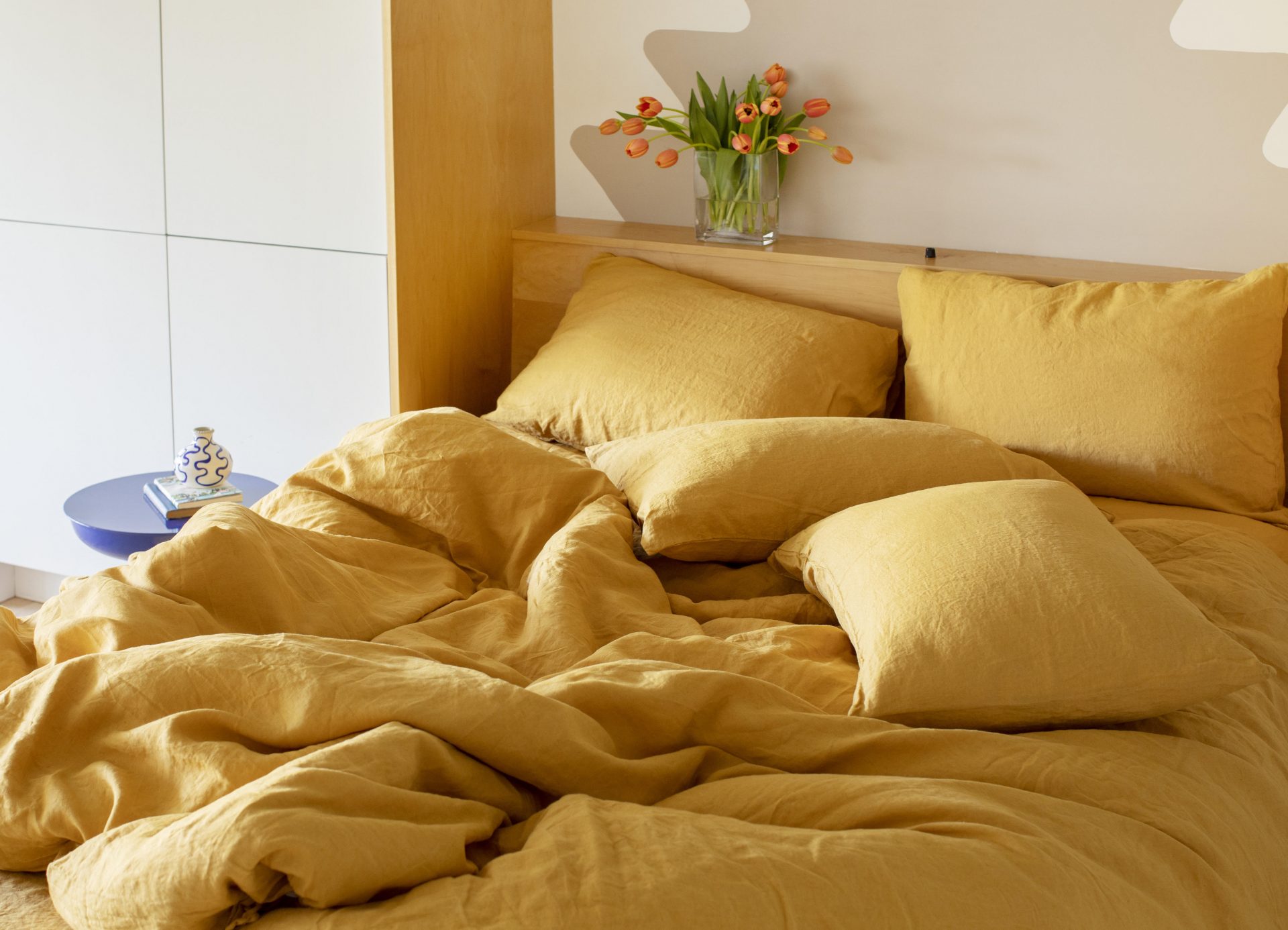 Flax Home is launching the Marigold shade of sheets as part of their “Homecoming” collection. (Credit: Flax Home)

While fabric is the backbone of Flax, so is design: their duvet covers close with small ties as opposed to a zipper or button, for example, and the fitted sheet is elasticized all the way around, not just in the corners.

“Linen lasts a lot of time longer than the notions that are attached to the fabric. I’m wearing a linen dress right now and the buttons will definitely come off before the linen breaks down,” she points out.

The philosophy of longevity is something Vivian has also applied to her own apparel purchases, none of which she ever thought about while practicing law.

“If you said to me 10 years ago that this is what would have happened, I would never have believed anybody,” she says now. “The first maybe six months after leaving law was an identity shift, which was hard…People are like, ‘Why would you leave?'”

After working for a big national law firm — and heading towards partner — she realized the path was “unsustainable” for her, which led her to BDC before launching Flax.

The shift was particularly challenging for Vivian’s traditional Asian parents, who she says came “full circle” after they heard her speak on a panel about entrepreneurship in 2019. “I didn’t hate [being a lawyer]. I liked the work… but I figured out I wanted to go somewhere where I could see what was happening on the ground floor. Lawyers are called by clients who say they need work [done] on something — usually they need you to close it in three days… I knew I wanted to be where the decisions were, not just coming in at the end,” she tells Daily Hive.

“My parents said [the panel] really opened their eyes to the fact that there are other opportunities they would have never thought of,” she shares of the panel. “It was a huge come to Jesus moment for them,” Vivian adds.

Since launching, the brand has had a number of pop-ups in both Vancouver and Toronto. While the company prepared to brace for a COVID-19 lull, it turned out the pandemic had the opposite effect.

“We were like, ‘What happens if we don’t sell another thing?’ And we ended up not being able to keep the shelves stocked whatsoever and had to bring in bigger and bigger inventory orders.”

2021 has already been a big year for the company: they officially re-branded to be Flax Home and are evolving from being a digital-only company to having their first storefront showroom in the Strathcona area.

“From a tactile perspective, linen is a new fabric for a lot of people to sleep on,” Vivian says, noting that the expansion into a full home line has already begun with a bathroom collection and the “Cuisine” collaboration with Jackie Kai Ellis. 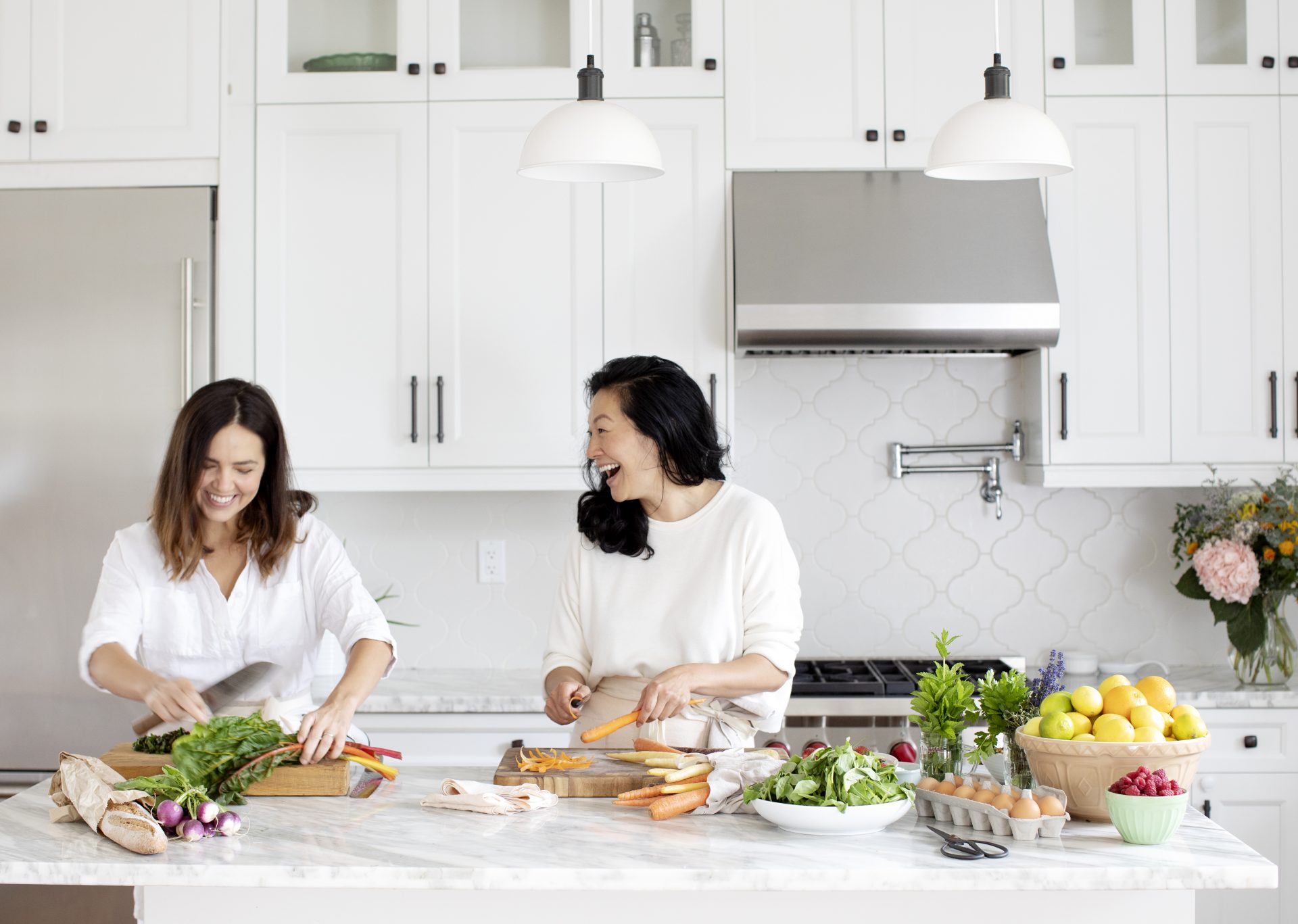 Next up, the brand plans to expand its marketing push into the Pacific Northwest with Seattle and Portland, eventually making their way down the west coast to California.