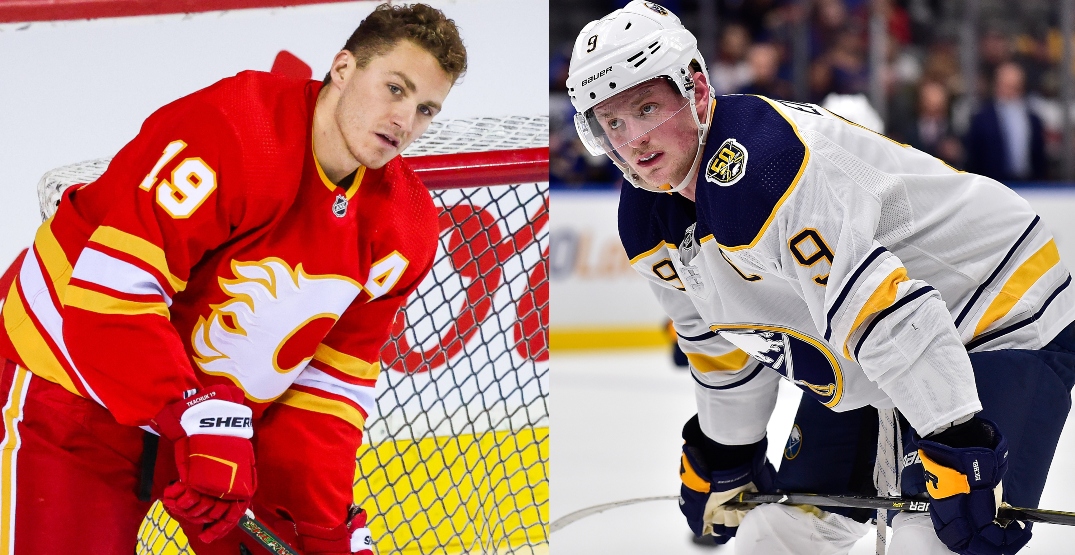 The Jack Eichel sweepstakes are heating up.

After a Tuesday report by ESPN’s Emily Kaplan revealed that the Calgary Flames and Vegas Golden Knights are the finalists to land the 25-year-old Buffalo Sabres centre, details have leaked regarding what Calgary is offering.

According to a report from ESPN’s Kevin Weekes, the Flames have put Matthew Tkachuk on the table, among other assets. An upcoming first-round pick, a former first-round pick, and two prospects are also being offered, Weekes reports.

For all asking, my understanding is the @NHLFlames have Tkachuk ( who is a future potential captain) an upcoming 1 Rd pick, a former 1st Rd pick, and 2 prospects in the Eichel sweepstakes with the @BuffaloSabres . @espn @NHLNetwork #HockeyTwitter .

A former second overall draft pick, Eichel is one of the best young players in hockey, having scored 355 points in 375 career games. The Massachusetts native hasn’t played a game since March 7, and he’s been involved in a dispute over how to treat a neck injury with Sabres management ever since.

Buffalo’s doctors want him to undergo fusion surgery, while Eichel is pushing for an artificial disc replacement surgery. It’s not a matter of if the stalemate will result in a trade, it’s a matter of when.

Any team acquiring Eichel will need to not only let him get his surgery of choice, but also wait for him to recover before getting him in their lineup. That does complicate things for a Flames team that’s off to a blazing hot 6-1-2 start, and desperately wants to return to the playoffs.

But Eichel is the type of superstar that may be worth the wait.

A three-time All-Star, Eichel scored 78 points in 68 games, prior to the pandemic ending the 2019-20 regular season. He’s under contract for four more years beyond this season, after which a no-movement clause kicks in for his $10 million annual salary.

Tkachuk, meanwhile, is Calgary’s highest-paid player at $7 million per season, but will become a restricted free agent at season’s end. The 23-year-old has 284 points in 358 career games, since being drafted sixth overall by the Flames in 2016.