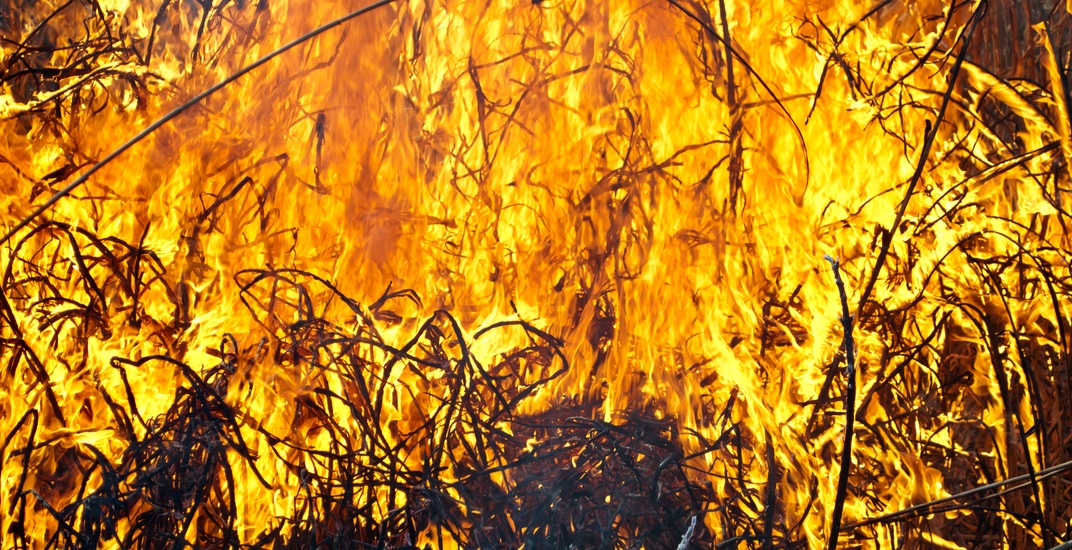 Nanaimo RCMP are asking for the public’s help to find whoever deliberately started two fires on Vancouver Island over the past two weeks.

According to a release, the first fire was reported on Wednesday, August 2 around 5:40 am in a field near 357 Howard Avenue.

Const. Gary O’Brien told Daily Hive the fire spread through the entire lot and was encroaching on nearby homes.

“The grass is extremely high and having a fire in there…it can spread very quickly and in less than a minute be out of control.”

However, O’Brien said none of the homes had structural damage and thanked the city’s fire crews for their quick response in putting the fire out.

As well, O’Brien thanked “astute” witnesses in the area, one of whom managed to film someone crouching down in the lot before the fire started seconds later.

The suspect in the first fire was dressed all in black with a backpack, said the release.

The second fire began five days later, on Monday, August 7 at about 3:30 pm, said the release.

In the second incident, O’Brien said, a witness actually chased the suspect, but had to stop to stomp on the fire before it could spread.

The suspect in the second fire is described as a white man, aged 18 to 22, approximately 6 feet tall with short dark hair.

He was seen wearing a dark shirt and had a white packsack slung over his shoulder, said the release.

BC is currently experiencing its second most destructive wildfire season on record, and as a result, all open fires of any kind are banned on Vancouver Island.

O’Brien said police believe both fires were intentionally set, but don’t know if the same person started both fires.

Now Nanaimo RCMP are looking for the public’s help in tracking down the perpetrator or perpetrators.

“It doesn’t matter where you live. With social media, everyone is connected,” said O’Brien.

“We’re looking for a connection between the two fires. We have our suspicions but that’s not good enough.”

O’Brien said the person or people who started the fires could face charges of mischief if found.

Location of the fires