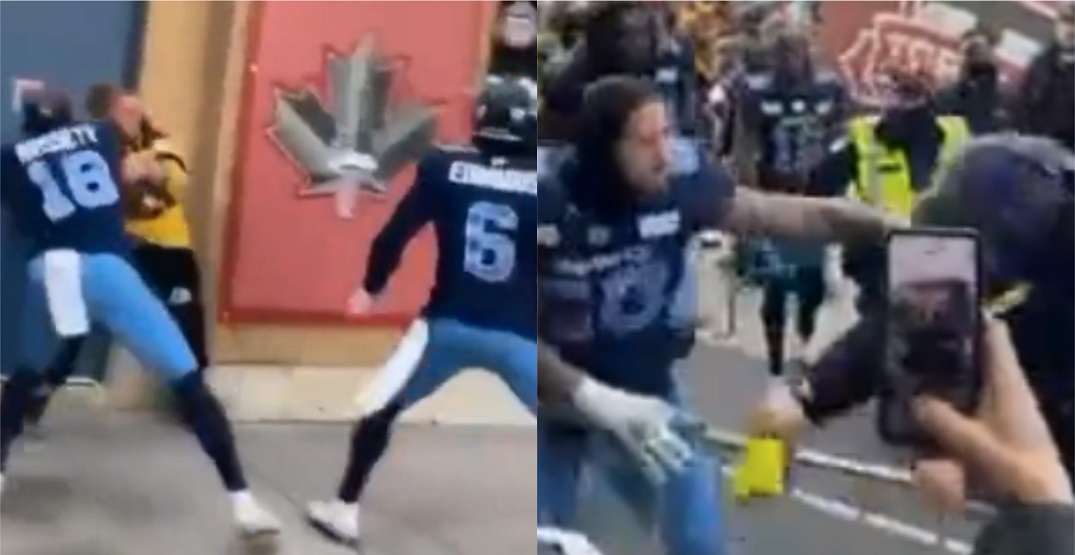 The Toronto Argos season ended abruptly on Sunday afternoon with a loss to the Hamilton Ticats.

After finishing the regular season with a 9-5 record, the Argos were bounced by Hamilton by a 27-19 score at BMO Field in the East Division Final.

But nobody could say that their year ended quietly.

Following the game, linebacker Chris Edwards and receiver Dejon Brissett were involved in an altercation with a Ticats fan while heading towards the dressing room.

While it’s not clear exactly what started the incident, the fan appeared to take a step towards Edwards and throw a punch. Brissett, who had hopped up from the lower level of BMO Field to come to Edwards’ defence. 6ixBuzzTV alleges that the Ticats fan had spat beer in a player’s face, potentially Edwards.

Full Video 2/2
Only thing we know for certain is BMO security lost control of the situation. pic.twitter.com/dV4WOp7Lxj

The fan was eventually apprehended by security.

Argos players giving this Hamilton fan a beat down! 😧

“The Toronto Argonauts, in conjunction with MLSE security, the CFL league office and local police, are investigating a post-game incident involving team personnel and visiting fans,” the Argonauts wrote in a statement. “The club will issue a statement once the investigation is complete and any outcomes are determined.”

“The altercation itself, I don’t know all the details on. I’m not qualified to give you an opinion. But anytime we have an interaction between players and fans it’s very disappointing.” — @TorontoArgos GM Pinball Clemons. #CFL #Argos

It’s been quite the week for the Argonauts making headlines for weird reasons, as the news comes just days after quarterback McLeod Bethel-Thompson was forced to quarantine after attending a Toronto Raptors game.