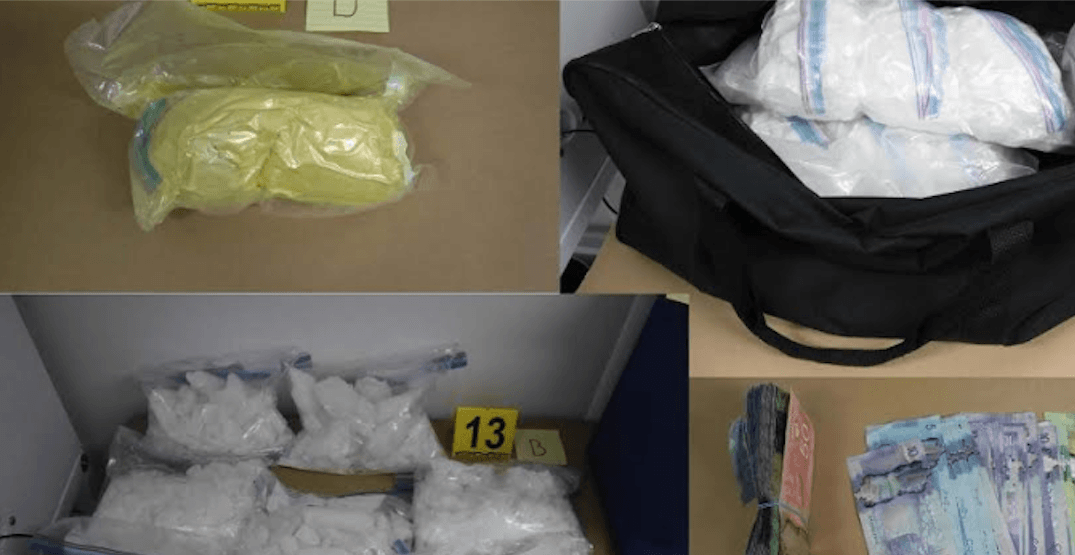 A photo of some of the drugs seized. (RCMP)

A “significant quantity “of illegal drugs believed to be destined for the Fraser Valley – Chilliwack in particular – were seized during the execution of a search warrant at a home in Vancouver, in a multi-jurisdictional drug trafficking investigation recently.

According to a release issued Friday, the seizure happened September 10 when members of the Chilliwack RCMP, along with help from the VPD, executed a CDSA search warrant in the 5600-block of Boundary Road in Vancouver.

Police said that during the search, an alleged 10 kilograms of methamphetamine, 700 grams of fentanyl, along with drug cutting agents, processing materials, cellular phones, and cash were seized.

Two people that were arrested during the search were later released by police.

“Vancouver Police Detectives from the Organized Crime Unit assisted the RCMP on this substantial seizure of drugs, we believe this will have a significant impact on the health and safety of the local community,” said VPD Sgt. Aaron Roed.

Now, police said, following a “thorough review” of evidence gathered, all circumstances of the investigation will be forwarded in a report to the Public Prosecution Service of Canada  for their assessment of charges.

“A large quantity of illegal drugs were seized before having an opportunity to reach the streets of our community,” said BC RCMP Cpl. Mike Rail.

“The Chilliwack RCMP worked closely with our partners at Vancouver Police Department to target a multi-jurisdictional drug trafficking organization.”