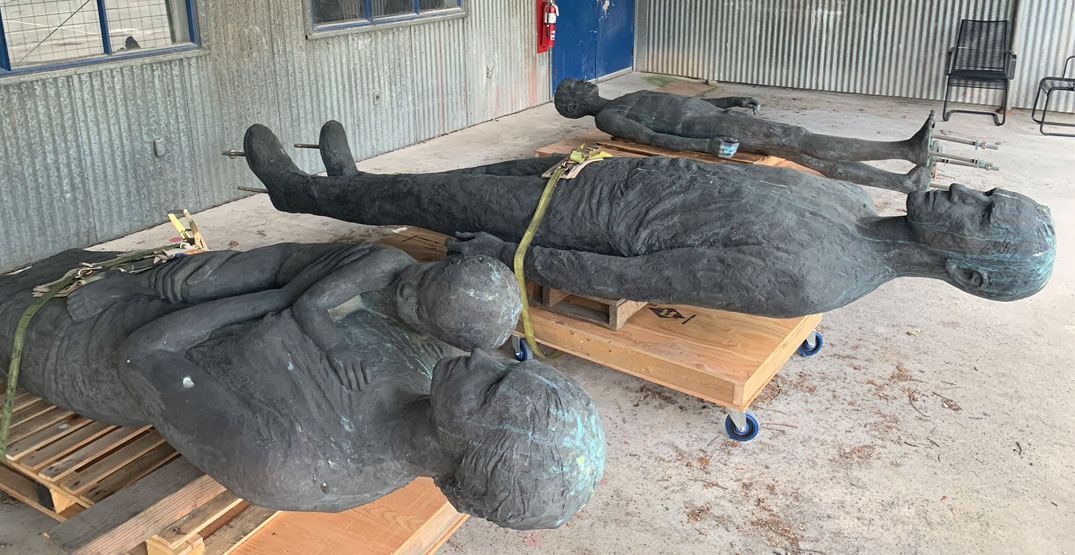 The Family sculptures waiting to be taken to their new home. (David McCann)

After spending years in a Surrey storage locker, The Family sculpture that once stood proudly in front of the now-demolished Pacific Press building on Granville Street will be moving back to Vancouver to take its place on Granville Island.

David McCann, general manager at Creekhouse Industries Ltd., said he took up the project when he learned PostMedia was seeking a new home for the art piece.

“I sent them an email asking why not consider bringing it to Granville Island,” he said. 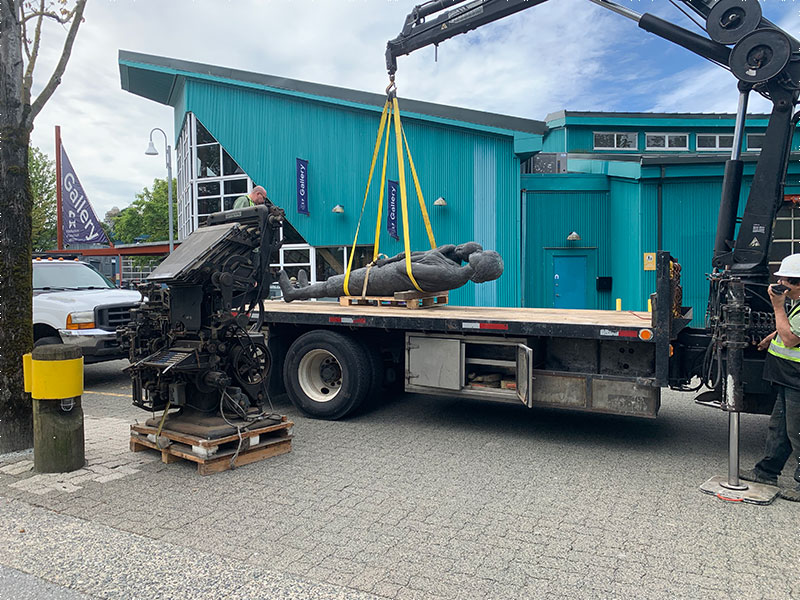 The mother and child portion of The Family being lifted on a flat bed for transportation to Granville Island. (David McCann)

And after a few conversations back and forth, McCann was able to secure the artwork.

The media outlet “sold the piece to me for a nominal fee on the condition that I erect it and donate it to the people of Canada. So it’s going to be a gift. We are looking at a tentative unveiling date of July 30, 2021, and an island-wide celebration. We are going to make it a day to remember, bringing The Family back home,” said McCann.

Once restoration is complete, The Family will take up residence in the area between the public park and the Creekhouse.

“Granville Island is such a family place. I think it is an appropriate home for a treasured piece of Vancouver’s art and Vancouver’s history,” said McCann.

The iconic statue by the late Jack Harman will be refurbished by Granville conceptual artist Cheryl Hamilton and sculptor Michael Vandermeer of i.e. Creative.

In the past, Hamilton said Granville Island was the centre for culture in the city and has a history of sculpture.

“We have great respect for the sculptors that came before us in Vancouver. We want Vancouver to retain its sculptural history. I think Vancouverites have identified Granville island in the past as a home for sculpture,” said Hamilton.

Already familiar with the sculpture from the time she was a little girl, Hamilton said her mother worked in the original building where it was installed. As an adult, she said going to see the sculpture in person was an informative experience and being able to see a bronze sculpture age is a rare opportunity.

“I have made bronze sculptures as well, and you don’t often get to look at something this old and rework it, so that was really interesting,” she said.

By restoring the statue, Hamilton said the intent is to try and preserve the patina on the sculpture to maintain its integrity.

“It speaks to it being a sculpture of its time. It’s old, and we want to make sure it still looks old when we put it back up. Some of the mounting points were damaged from either its storage or removal, and we have to bring those back up to modern-day standards. We’ll have to take a look at the bronze and make sure it’s all still in tact and not damaged from any of the moves, and then put it back up safely,” said Hamilton.

Hamilton said sculptures like The Family have a huge role in the cultural fabric of a city. She believes sculptures should be discussed and leave people asking questions.

“This sculpture does all those things. It did it in its time and I think even in its reemergence, it does it again. This is a piece that is a dated version of what family is. It was the artist’s family and it has a vulnerability to it that made it significant. Even though this is a representation of a traditional family, I think it marks a break in that representation. It’s vulnerable and it feels human, so I think that that’s worthy of new conversations,” said Hamilton.