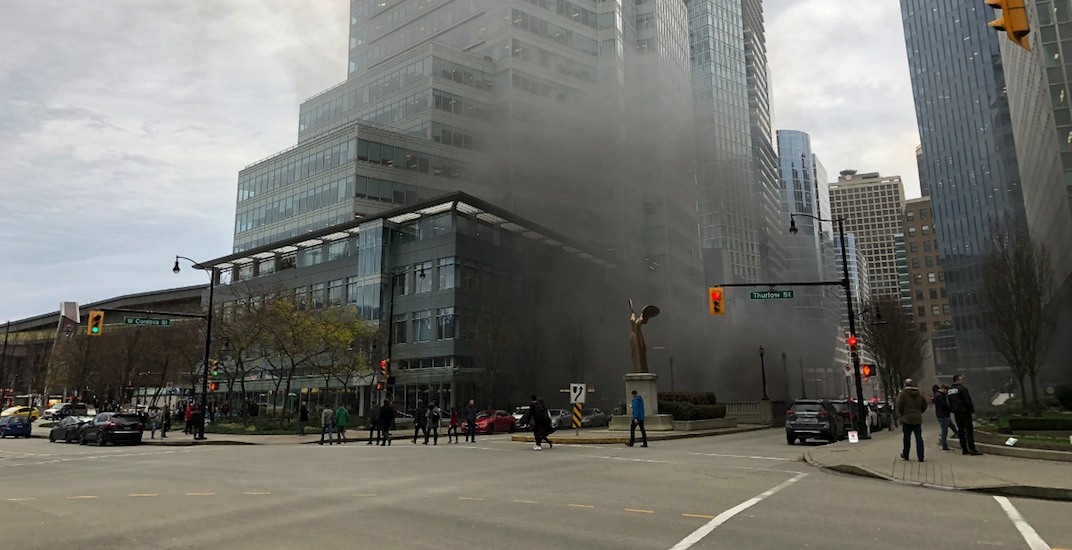 Smoke from a fire in the area of the intersection of Cordova Street and Thurlow Street on December 14, 2018. (Melanie Antweiler / Twitter)

UPDATE at 2 pm: Smoke in the tunnel has been cleared. Regular train service on the Expo Line in downtown is now resuming.

UPDATE at 1:51 pm: TransLink says the Vancouver Fire Department has extinguished the fire. Regular train service will resume once the tunnel has been cleared of smoke. This is expected to happen soon.

Train service on SkyTrain’s Expo Line in downtown Vancouver has been significantly impacted by smoke in the tunnel from a nearby fire.

At this time, there is no train service at Waterfront Station, Burrard Station, and Granville Station; trains traveling into downtown are only going as far as Stadium-Chinatown Station before turning back.

The fire is located within an underground location outside of SkyTrain property, within span between Burrard Station and Waterfront Station — near the intersection of Thurlow Street and Cordova Street. Service disruptions began shortly after 1 pm.

Canada Line service has not been impacted.

Is it the #skytrain tunnel? pic.twitter.com/HW0p0YlH88

Over on the Millennium Line between Commercial-Broadway Station and VCC-Clark Station, a one-station shuttle train service is still in effect today due to a small landslide into the track in the Grandview Cut.

Passengers must transfer trains at Commercial-Broadway Station’s platform 1 to continue their journey on the Millennium Line.