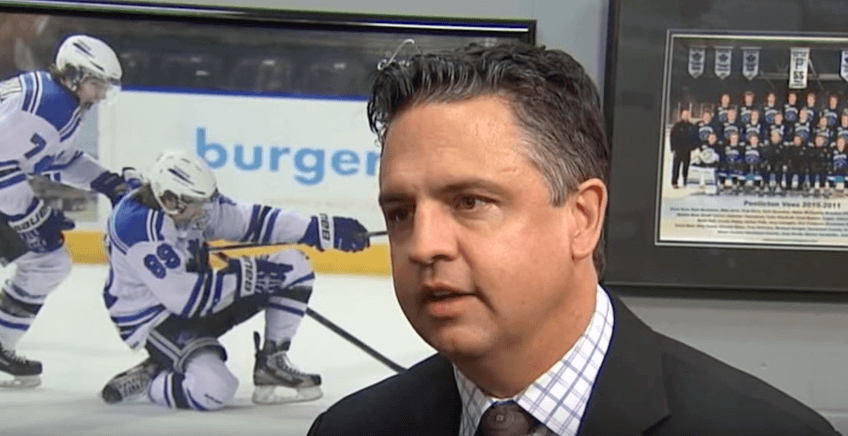 Travis Green will enter his fourth season as head coach of the Vancouver Canucks’ farm team in Utica this year. Many believe it will be his last in the AHL.

Green, who became the Comets’ head coach before their inaugural season in Utica, took over after winning a WHL Championship with the Portland Winterhawks in 2013. The 45-year-old has seen a lot in three seasons with the Comets.

Green got a rude awakening when taking over a talent-starved team in 2013. The prospect pool in the Canucks’ organization was bare back then. To make matters worse, the team’s starting goalie was Joacim Eriksson, who probably wasn’t ready for a starting goalie assignment. Utica struggled on the ice, not winning until their 11th game of the regular season.

But Green persevered and got his team back on track, leading the Comets to a respectable 35-24-4-3 record the rest of the way.

In 2014-15, with a better roster and an All-Star goalie in Jacob Markstrom, Green had his team in the Calder Cup Finals.

The Comets took a step back last season, albeit with less talent, getting ousted in the first round of the playoffs. Still, only four other AHL teams have more points than Utica over the past two seasons. For now, he’s taking a wait-and-see approach going into next season, not wanting to make any projections.

Green was in Vancouver on Friday and took time to sit down with Daily Hive to talk about his coaching style and his future, shortly before presenting at the 2016 TeamSnap Hockey Coaches Conference in Burnaby.

“I’m demanding,” Green said, speaking in a calm but firm manner that likely resonates with players. “I expect a lot out of my players. But going the other way, I give them a lot. I’m fair, open, and honest. I think players know that they can trust me and I want the best for them.

“I push them hard. I try to install certain things that I want them to do and I’m a little bit relentless in getting that point across but I think I’m also fair.”

Green’s fair but firm approach has helped him get the attention of NHL general managers. He was interviewed for head coaching jobs this offseason, but came up just short.

Randy Carlyle expected to meet with Ducks today re: coaching job. Travis Green also among those in mix in Anaheim.

“It’s flattering. I got into coaching after I retired (in 2008) with a plan. The end plan being in the NHL again as a coach, and hopefully winning a Stanley Cup. To get knocking on the door last year was flattering, hopefully down the road there’s a fit that’s right for me.”

Some believe that fit could be with the Vancouver Canucks, as early as this season.

Coming off a trying year, it’s conceivable that Willie Desjardins won’t get a lot of rope this season. If the Canucks struggle more than anticipated, Desjardins could be the fall guy.

Such is life as a head coach in the NHL.

Some felt that moving into an assistant’s role in the NHL this season was a natural progression for Green – Vancouver had a vacancy after Glen Gulutzan was hired by the Calgary Flames – but the native of Castlegar, BC disagrees.

“For me personally, I feel that staying on as a head coach is the right thing for me. I think it’s different for every coach.”

Making the transition from assistant to head coach can be difficult, because you lose the shock factor with a new group. An assistant’s voice can already be on its way to becoming stale, and players may not feel like they’re getting a fresh start.

“Some guys go from being an assistant in the NHL to a head coach in the NHL, but there’s always different scenarios. I think it’s real important as a coach that you do have some kind of a plan and you can’t get off your plan just because something looks attractive.”

The plan for Green is to stay the course, which means riding the bus instead of flying on private jets.

“Is it easy to not go to the NHL as an assistant coach? No, it’s not. It’s the best league in the world. I was there a long time, it’s a great place to be and to work in any capacity. I’d be grateful to be back in the league one day.”