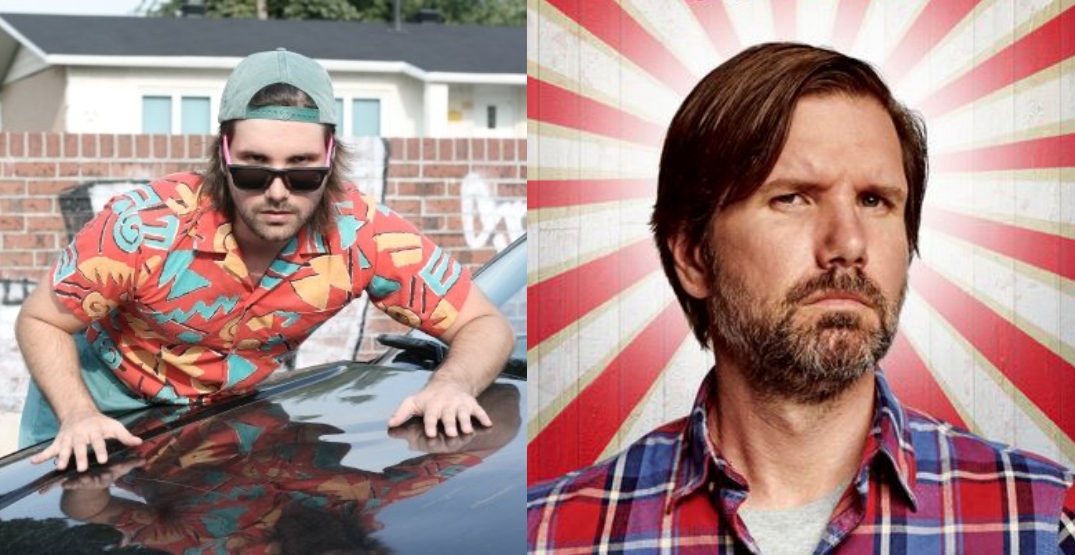 In the Wild West days of YouTube, Montreal comedian Jon Lajoie’s brand of silly musical comedy broke through to the masses, leading him to go viral.

This was back when “going viral” actually meant something.

With smash hit musical sketches like WTF Collective and the Everyday Normal Guy trilogy, Lajoie and his signature dry delivery amassed hundreds of millions of views, paving the way for countless musical parody and satire comics to come.

After taking off on YouTube, the 41-year-old Montreal native moved to Los Angeles and earned himself a starring role on the hit sitcom The League. Never forgetting his musical roots, Lajoie has also been writing and recording indie folk music under the name Wolfie’s Just Fine.

Most recently, the bilingual funny man participated in the Canadian edition of Prime Video’s world-famous comedy competition, LOL: Last One Laughing Canada. The show, hosted by fellow Montrealer Jay Baruchel, features 10 of the country’s best comedians in a room with each other for six hours. Whoever laughs first is out, and the last one standing wins a large sum of cash for charity.

Daily Hive Montreal spoke to Lajoie about his YouTube days, his experience on LOL: Canada, and his connection to his hometown.

I don’t even know that I’m the right person to answer that question, but I know that it was different.

TV and the internet hadn’t merged yet, so the internet was its own thing. Content creators were the centre of YouTube.

And there weren’t as many people online yet. There were no smartphones, which meant I had to shoot on this old camcorder and edit on this old computer that would crash every time I tried to edit something because it was so slow.

It was a little harder to put together stuff like that. It was a different era for sure.

So yeah, if I started making videos today, I don’t even know that anyone would give a shit.

How has being a Montrealer shaped your comedy?

I forget how much Montreal, Quebec, and Canada as a whole influence my sense of humour.

When I’m here in Los Angeles, where I’ve lived for the past 12 years, I really notice in my sensibilities, what makes me laugh, and what doesn’t. And it all kind of goes back to like Kids in the Hall, François Pérusse, and a bunch of other French comedy albums I grew up listening to.

When I was in fifth grade, our English teacher would just turn the TV on and play Kids in the Hall for us. And I don’t know that I really understood what was happening. But it was grownups being very silly and weird. Very strange. I didn’t understand what being absurdist meant. I didn’t understand the comedy at all then, but it made me laugh.

Do you think some of your content from 10 – 15 years ago would be able to fly these days?

Oh, I mean, of course not. And for the most part, for very good reason.

Without getting into the conversation about what can comedians do and all that stuff — I’m not the right person to talk about that. I just know that what I was doing at the time I wouldn’t do it today, but not necessarily because of where the culture is. A lot of that, yes. But also, just as a 41-year-old man, different things make you laugh at a certain point.

I still love dark humour. That’s still the stuff that makes me laugh the most.
I watched some of my old stuff today, and I was like, oh, damn, go 26-year-old John. You got some rhymes.

As a contestant on Last One Laughing: Canada, who made you crack up the most?

Well, everyone, I think, almost made me crack up countless times. Dave Foley almost got me pretty early on. He made a really dark joke. And I almost laughed.

Colin Mochrie did it the most for me. When I walked into the room, I saw his face first. And I was like, Oh, damn it, I’m screwed.

I grew up watching Whose Line Is It Anyway? And it taught me what improv was. People forget, but in the 90s, a lot of us didn’t know what improv comedy was. And that show, and Colin in particular, kind of showed us that someone could just be funny on the fly.

What did not being allowed to laugh teach you about your sense of humour?

I really was expecting to be eliminated in 30 seconds the whole time. The whole lead-up to it, my wife was like, “you’re screwed; you laugh at everything.” And I laugh at my own jokes, which is very problematic.

Also, when you’re in a room with funny people, you’re going to laugh.

And then, you start thinking about, like, well, if you’re not allowed to laugh, what is the thing that gets through? Like, what’s the type of joke that would hit the comedy lizard brain? And for me, it was just like, the dumbest sort of thing that would make a toddler between the age of two and four laugh.

Poop jokes, farts, and then just like, weird sounds out of nowhere, stuff like that ended up being what I realized I’ve kind of built a career off of.