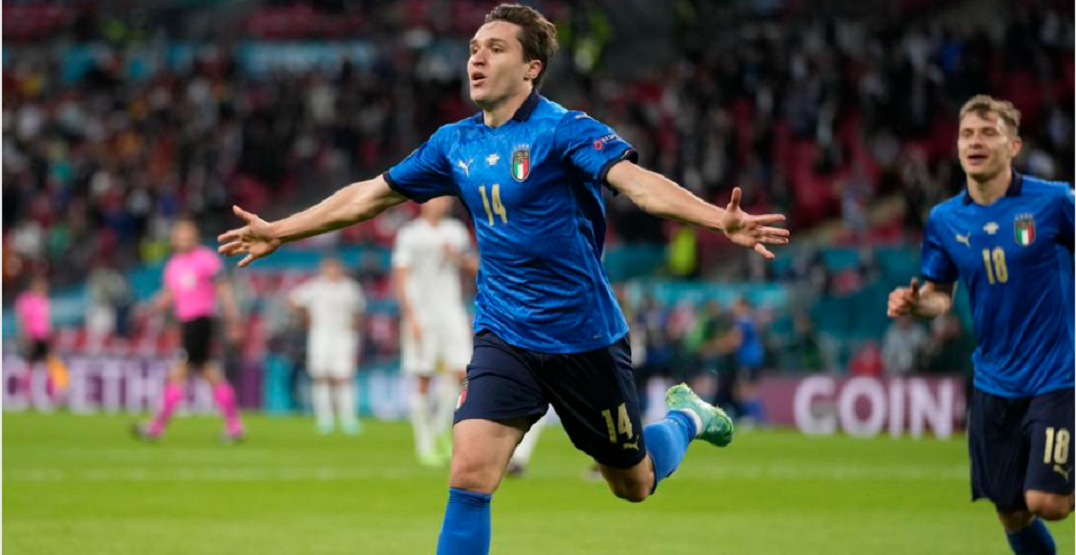 The Italy men’s soccer team is just one win away from their latest major tournament victory after a penalty shootout win against Spain.

Chelsea midfielder Jorginho put his name in the history books with the winning penalty kick, after the game ended 1-1 after extra time.

Jorginho sends Italy through to the #EURO2020 Final! pic.twitter.com/1tG24huh1O

Both Italy and Spain were unable to score their first penalty kicks, adding drama to the occasion.

Italian Forward Domenico Berardi scored during extra time for Italy, but it was disallowed due to offside.

Spain also nearly took the lead during extra time in the game’s 98th minute, but Donnarumma was able to keep the ball out of the net.

The ball takes a few bounces but stays out! Italy and Spain remain tied at 1 in extra time. #EURO2020 pic.twitter.com/it4TKYeXiq

Spain dominated for many portions of the match, with a 71% possession rate and and a 16-7 shots lead.

But it was Italy who opened the scoring and ultimately came out on top.

Federico Chiesa, who for Italian club Juventus (on loan from Fiorentina) scored the game’s opening goal in the 60th minute.

Federico Chiesa gets Italy on the board! #EURO2020 pic.twitter.com/2cSxTJ5E3d

Tuesday’s match was a rematch of the 2012 European Championship final, which saw Spain win by a 4-0 rout.

The Azzuri donned their famed blue shirts for the match, while the Spaniards lined up in white.

Morata, who also plays for Juventus on loan from La Liga club Atlético Madrid, equalized the game at 1-1 in the game’s 80th minute.

Álvaro Morata finds the back of the net and we're all tied up! #EURO2020 pic.twitter.com/Twi1OzJsVG

Italy entered the semi-final with five wins in as many matches after tearing through the group stage while only allowing one goal.

Spain, meanwhile, didn’t win until a 5-0 result against Slovakia in their third group game, and required a penalty shootout against Switzerland in the quarterfinals to reach the final four.

The final is slated for this upcoming Sunday, June 11 at England’s world-famous Wembley Stadium, which also plays host to both of this year’s semifinals.

Italy will play the winner of the England-Denmark semi-final match tomorrow.

Both of the remaining two Euro 2020 matches will kick off at 3 ET/12 PT on their respective dates, and can be viewed on TSN and TSN.ca. Sunday’s final can also be viewed on CTV and CTV.ca.