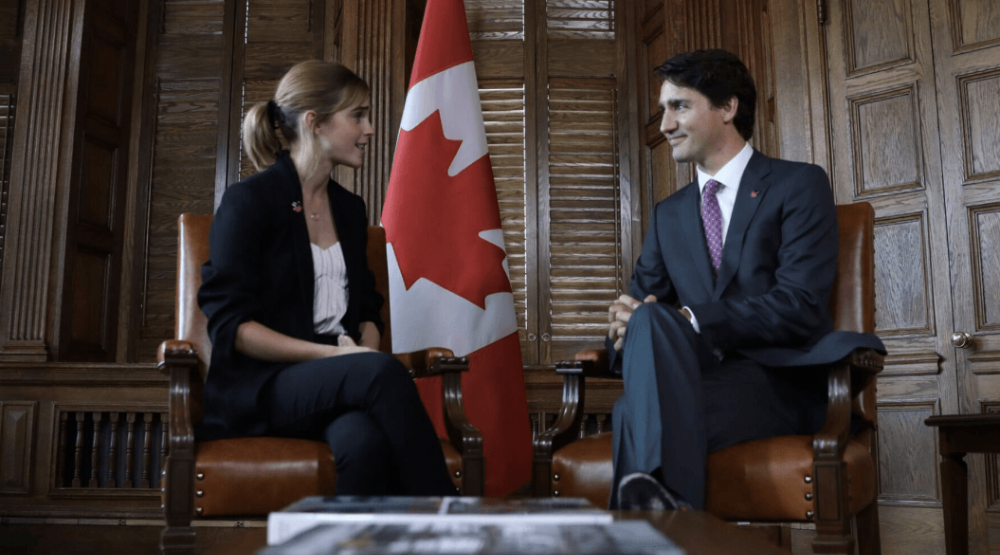 The actress and UN Goodwill Ambassador chatted with the PM about her work with HeForShe, a solidarity campaign for the advancement of women across the globe.

.@EmWatson is a champion for gender equality worldwide. It's a pleasure welcoming you to Ottawa ahead of the @OneYoungWorld summit #heforshe pic.twitter.com/gIkE05uG7i

“The HeForShe campaign has extraordinary impact around the world, making men champions of women’s issues that are everyone’s issues,” Trudeau said during the meeting. “(Watson’s) voice is extremely important in making people important how important this is.”

Turns out, Trudeau is a HeForShe ambassador, and is supporting Watson’s initiative.

In the past, the Prime Minister has definitely not shied away from the issue of women’s rights.

Trudeau made a point to have a gender equal Cabinet and openly stated that he is a feminist at the UN women’s conference in March.

“I’m going to keep saying, loud and clearly, that I am a feminist. Until it is met with a shrug,” he said.

It seems like Watson was definitely a fan of Trudeau.

“It’s been such an exciting visit for me to come visit your parliament. It was so inspiring that you made your cabinet 50/50,” she said. “We’re very excited that you’re a He For She Youth Ambassador. I can’t wait to see what you’re going to do with that title.”

Love him or hate him, you’ve got to give it up to Trudeau for supporting girl power.