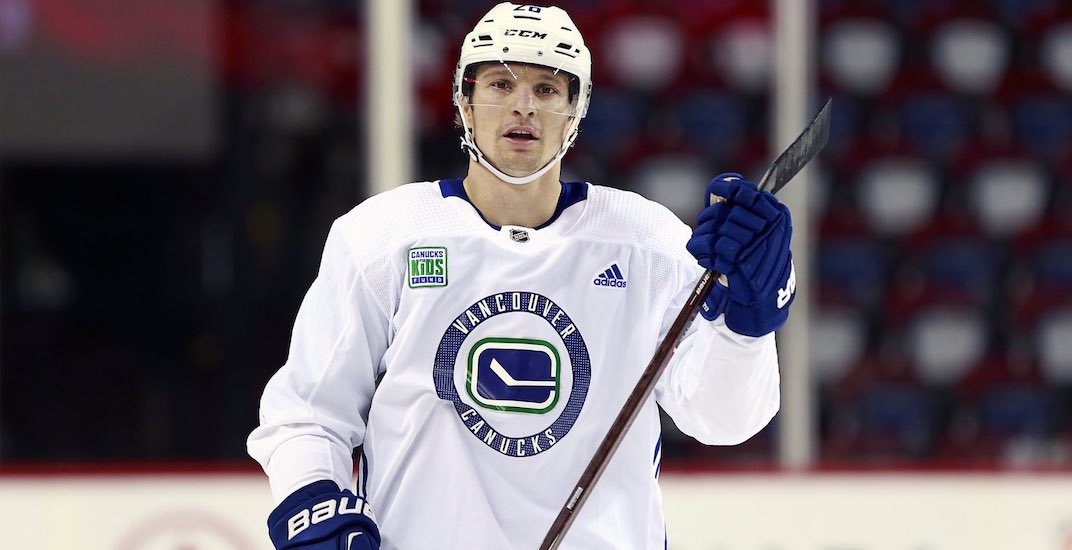 Signing three bottom-six forwards and committing 10 years and $8.15 million of average annual salary on the first day of free agency hit a nerve with many Canucks fans this summer.

People understandably had their guard up for a general manager that has committed big money to the likes of Loui Eriksson, Brandon Sutter, Luca Sbisa, and Erik Gudbranson in recent years.

And while the four-year contract dished out to a soon-to-be 34-year-old Jay Beagle is certainly still in everyone’s crosshairs, another four-year deal signed on July 1 isn’t looking so bad right now.

Antoine Roussel got lumped in with Beagle by virtue of signing a similar contract, but the reality is they bring different things to the table.

Flying under the radar in training camp, by virtue of the fact he missed the entirety of it with a concussion, the 28-year-old winger from Roubaix, France has had a nice start to his Canucks career since then.

He hasn’t missed a beat since returning from injury on October 13, notching three points in his first 10 games. A winger that prides himself on bringing energy to the ice on every shift, Roussel found the back of the net just five times last season – his worst statistical season in the NHL.

His shooting percentage (5.9%) in 2017-18 was easily the lowest of his career though, so he was due for some puck luck. That came right away, showing some skill by scoring on a penalty shot in his Canucks debut.

His second goal of the season Wednesday was scored in a more familiar fashion, getting a garbage goal created with his speed and putting the puck on net.

“I never try to change too much in the way I play,” Roussel told Daily Hive after Thursday’s practice session at UBC.” I just go to the net, crash the net, score dirty goals. That’s my style. Once in a while, score a nice one.”

Roussel was a remarkably consistent player in the traditional metrics before last season, scoring between 25 and 29 points in four straight years.

But the 5-foot-11, 199-pound winger won’t be judged merely on goals and assists. Roussel has brought energy to a team that needed it. Watching a player like him work his tail off every shift has a way of raising the work ethic of his teammates, particularly with young players.

He’s on a checking line with Brendan Gaunce and Tyler Motte right now, which is clearly a role he relishes.

“I’m playing with guys that play just like me right now. Just grind, it’s awesome. They got a lot of energy as well. I think it just creates momentum towards our lineup. If we have a good shift in the o-zone, we get a good change, and then it just carries towards the next guy. I believe you need guys like that to lead the way in the working areas.”

Roussel is the type of player that also creates energy on the bench – with his mouth.

“Yep, all the time,” Roussel said when asked if likes to talk. “It never shuts off.”

The Canucks have been a surprise team through the first month of the season, sitting with an 8-6-0 record. That’s even more impressive given their run of bad luck with injuries, and their road-heavy schedule against tough opponents.

“We’re still finding a way to win, so it’s encouraging. It’s pretty fun to watch the resilience of our group.”

Coming off a season playing for Ken Hitchcock, Roussel is enjoying the style of play head coach Travis Green preaches. He says it reminds him of the way Lindy Ruff coached in Dallas.

“When we won the West, we were playing just like that,” said Roussel of the 2015-16 Dallas Stars that finished the second with 109 points. “Up-tempo, a lot of involvement of the D in the offensive zone, a lot of movement. It’s not so much static and it just creates so much opportunity, free space.

“That way, it’s more fun to play the game, rather than just looking at the boards and just chip, chip, chip.”

“Fun” hasn’t been a word to describe the Canucks in recent years, but for at least one month, Roussel has helped make that a reality.