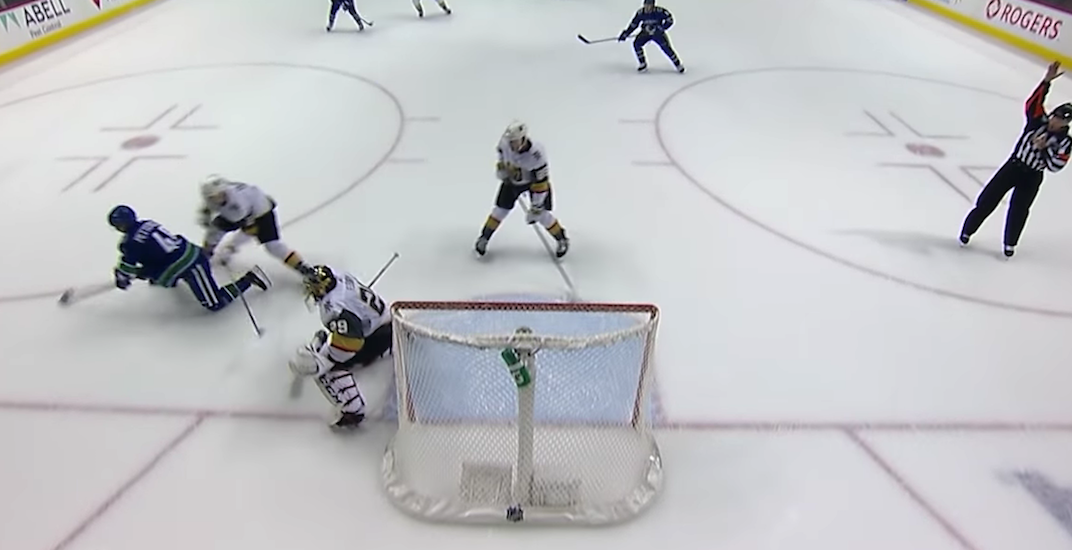 The Vancouver Canucks have only played 28 of 82 games, but you won’t see a more impressive assist this season.

Well, not until Elias Pettersson’s next act of brilliance, anyway.

The Canucks’ 20-year-old Swedish magician showed off another trick on Thursday, making a pass nobody on the ice could believe he completed.

After picking off a cross-ice pass out of mid-air, Pettersson was tripped by Vegas Golden Knights defenceman Nate Schmidt, causing him to fall to his belly. The play drew a delayed penalty, but Pettersson wasn’t finished.

Undeterred and still with the puck in front of him, he got back up to his knees to deliver a no-look pass to the slot shortly before being crosschecked to the ice by Brayden McNabb.

The pass was a perfect one, right to linemate Brock Boeser who made no mistake to give the Canucks a 1-0 first-period lead.

What makes this play extra amazing is that Pettersson delivered the more difficult passing option on his forehand, needing to wrap-around his body to do it. Had he made the no-look pass on his backhand like most other players would have opted for, Schmidt would have been in position to intercept it.

.@_EPettersson and @BBoeser16 comment on the first goal they combined on against the Golden Knights. pic.twitter.com/30bWVE6Ywz

The goal gave the Canucks a lead in a game they should have won. After battling back from a two-goal deficit to tie the game in the third period, a comedy of errors on a late period power play led to a shorthanded goal for the Golden Knights. The Canucks lost 4-3.

It was a perfect game for Team Tank. The Canucks lost for the 10th time in their last 11 games, thereby increasing their odds at a better draft pick next June, while their young players gave hope for the future.

Boeser scored twice and looks to indeed be 100% healthy in just his second game after returning from injury. And Bo Horvat added two assists in a whopping 23:41 of ice time.

Now if they could just fix the rest of the team…