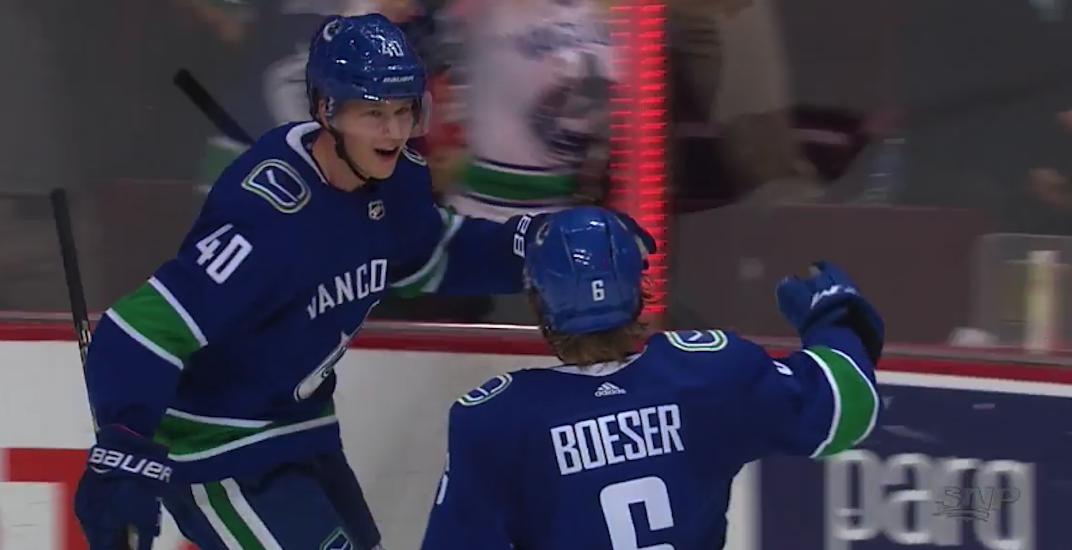 The best season ever recorded by a Vancouver Canucks rookie was Pavel Bure in 1991-92. Scoring 34 goals and 60 points in 65 games, it was an electrifying beginning to a Hall of Fame career.

But the Russian Rocket didn’t have a start like the one Elias Pettersson is having. Not even close.

It’s a small sample size, sure, but Pettersson is doing things we’ve never seen before from a Canucks rookie in his first seven games.

The 19-year-old was spectacular again on Monday night.

Following the first game of his career where he didn’t register a point, Pettersson scored two highlight-reel goals in Vancouver’s 5-2 win over the Minnesota Wild.

The first goal came on a wicked one-timer in the second period to give the Canucks a 3-1 lead. Watch as Pettersson drops to one knee to find the perfect shooting angle on a pass from Michael Del Zotto.

His second goal was even better, as he was sprung on a breakaway after blocking a point shot. Pettersson’s blazing speed coupled with a quick, accurate, and deceptive release on his shot meant that Wild goalie Devan Dubnyk didn’t have a chance.

The young Swede now has seven goals and 10 points through his first seven games. That’s the most points any Canucks rookie has ever had to start a career.

You can literally see the exact moment this young fan discovers his very first, favorite player of all time. #EP40 pic.twitter.com/LKb0D2URtx

Pettersson is just the eighth player in the NHL’s modern era to score at least this many goals in his first seven games.

Elias Pettersson of the @Canucks is the 21st player in League history to score at least seven goals through his first seven career games and just the eighth to do so in the NHL’s modern era (since 1943-44). #NHLStats #MINvsVAN pic.twitter.com/2f4q3JIjqR

It’s a little early to project how many points he’ll get by the end of the season, but aww hell, let’s do it anyway. Pettersson is on pace for 76 goals, 33 assists, and 109 points in 76 games.

Not only would that smash Canucks rookie records, that would be the most goals and third-highest point total by anyone in franchise history.

Only Greg Adams (1987) and Alex Mogilny (1995) have ever had a quicker start to a Canucks career, though neither one of those players were rookies when they came to Vancouver – never mind being a teenager. Adams went on to score 36 goals and 76 points in 1987-88, while Mogilny had 55 goals and 107 points in his first season in Vancouver.

Elias Pettersson became the third player to score at least seven goals through his first seven career games with the @Canucks (NHL debut or otherwise).

With one game left this month, Pettersson has a shot to break the Canucks rookie record for most points in the month of October – and in fewer games than the rest of the leaders.

Like Bure, Pettersson is a player that brings fans out of their seats whenever he gets space with the puck. His speed, shooting, stickhandling, and playmaking skills are already at an elite level.

As with most rookie centres, faceoffs were expected to be a problem for the youngster, but he’s held his own. Pettersson has won 30 of 65 draws, ranking ahead of veteran Jay Beagle and behind only Bo Horvat and Brandon Sutter.

Defensively, he’s been fine as well and he’s only going to get better.

Imagine what he’ll be capable of as he matures and builds more muscle mass.

It’s been just seven games, and there’s lots of work left to be done, but it’s impossible not to be excited about Pettersson’s future. Because as long as he can stay healthy, it looks like the Canucks have a superstar in the making.