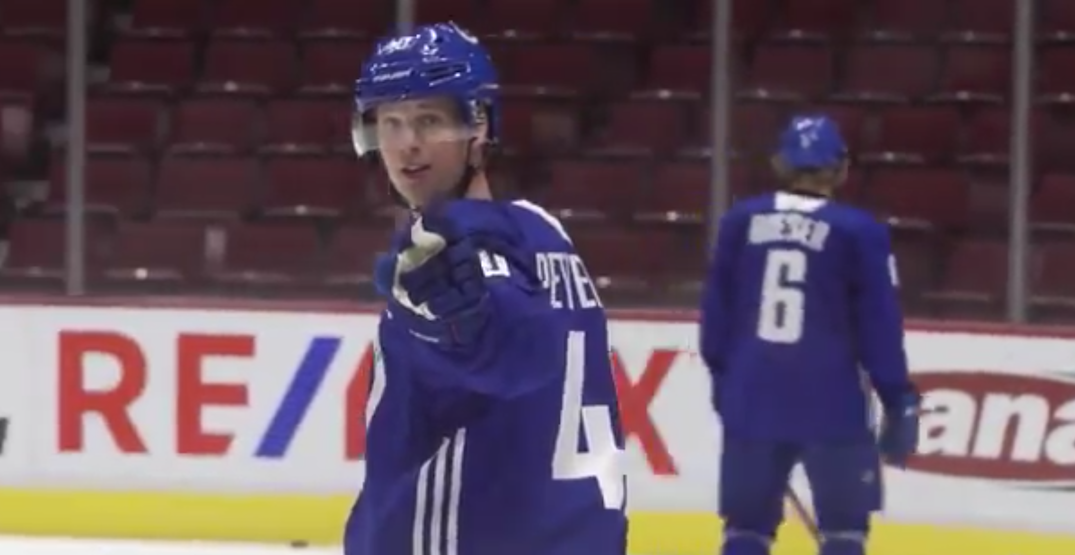 The Vancouver Canucks returned to the ice at Rogers Arena for the first time in more than three and a half months today.

While Alex Edler, Chris Tanev, and Troy Stecher have been skating locally for weeks, they did so on their own at Planet Ice in Delta. With training camp fast approaching, more players are returning to Vancouver, necessitating the Canucks to open up their home ice for limited player sessions.

As part of Phase 2 of the NHL’s return-to-play plan, up to six players are allowed on the ice at the same time at team facilities. Phase 3 (training camp) is scheduled to begin next week, on July 10, while the start date for Phase 4 (games in hub cities) is still yet to be determined.

Among the players on the ice was Elias Pettersson, who has returned from Sweden, as well as Brock Boeser (Minnesota) and Quinn Hughes (Michigan).

Jacob Markstrom is back from Sweden and was sporting a new goalie mask.

The media is not allowed into training sessions during Phase 2, but Edler, JT Miller, Tyler Toffoli, Tyler Motte, and Oscar Fantenberg were also seen skating in a video the Canucks posted today.

Adam Gaudette and Jordie Benn have also indicated that they have returned to town via social media.

Players were joined by a limited number of team staff, who were all wearing masks, on and off the ice.

The boys are back at it, putting in some work. 💪🚨🔥 pic.twitter.com/lLbx5D9Na0

Given that he and his wife welcomed a new baby boy to the world on Sunday, it’s likely safe to assume that captain Bo Horvat hasn’t returned from Ontario yet.

Any player returning from outside of Canada has to quarantine for 14 days, though the government has already granted the NHL special permission to do a cohort quarantine, allowing players to do their job at the arena before returning to the hotel.

Hughes, who spoke to reporters via a video call, indicated that he’s staying at the JW Marriott, which was a top candidate to host players in Vancouver’s hub city bid, given its proximity to Rogers Arena.

“It was really nice to see the boys again,” said Hughes. “Everyone missed each other and it was a fun day today just to see everyone. Obviously we had to follow staying pretty far away from each other… but just to see the guys, it was nice.”

Players are required to stay six feet apart from each other, which includes in the workout room at Rogers Arena as well as at the hotel, Hughes said. It’s an inconvenience players aren’t used to, but it’s one they’re more than willing to do to get back to playing.

“We’re all excited to be back and we all want to be on the ice again and playing, so whatever that takes, we’ll do.”