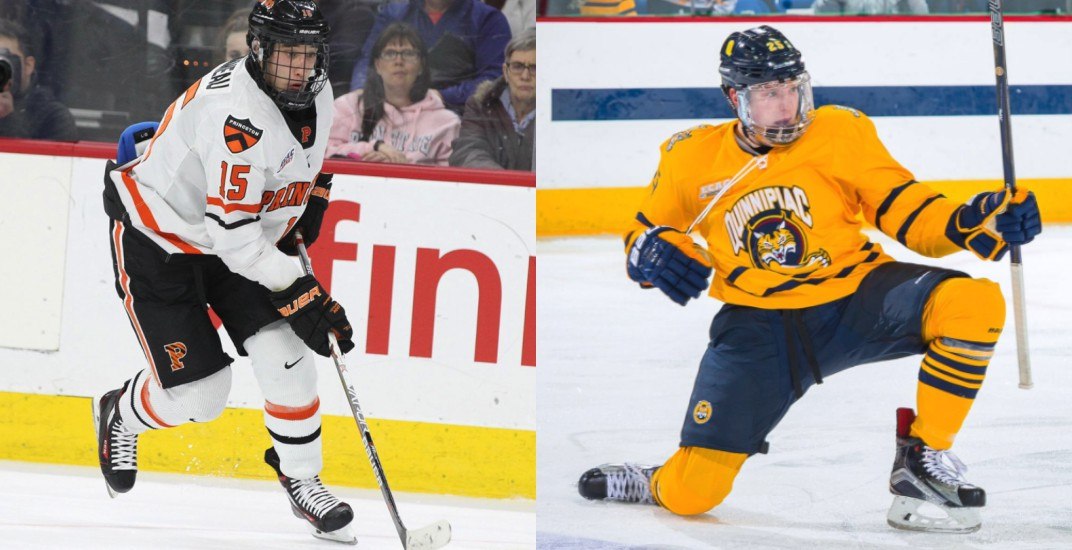 It’s that time of year again when NHL teams look to the NCAA for some free talent.

Undrafted college free agents have become of increased importance over the years, with many players bolstering NHL rosters to one degree or another.

If you follow the Vancouver Canucks, you should know all about this already, as Chris Tanev and Troy Stecher joined the organization as undrafted college free agents.

While not every college free agent pans out (remember Kellan Lain?), this is a rare chance for NHL teams to pick up a prospect that’s further along the development scale. Rather than trying to project 18 or 19-year-olds like they do at draft time, NCAA free agents are typically 22 or 23.

It appears the Canucks have their eyes on a couple more players this year, as News 1130’s Rick Dhaliwal reports that the team has interest in forward Max Veronneau and defenceman Brogan Rafferty.

Lots of NCAA Free agents. I'm hearing the #Canucks have interest in Quinnipiac defenseman Brogan Rafferty and Princeton forward Max Veronneau who has been nominated for this year's Hobey Baker award.

Veronneau, who is in his third year with Princeton University, is the more high profile of the two.

The 22-year-old right winger leads his team in scoring with 25 points (9-16-25) in 20 games and is currently tied for 14th in points per game in the NCAA. The 6-foot Ottawa native was recently nominated for the Hobey Baker Award with a number of other players, including Canucks prospect Adam Gaudette.

GOAL! Veronneau with his second of the night and Princeton is back on top 3-2. Paolini with an assist in his first game, and Riche. pic.twitter.com/NeSXP9u2M3

Veronneau was mentioned in the December 11 edition of Elliotte Friedman’s 31 Thoughts column, as Princeton reportedly asked NHL teams to limit their interactions with the forward and two of his teammates as it appeared to be getting “out of hand.”

Rafferty is a 22-year-old right-shot defenceman in his second year with Quinnipiac University.

The 6-foot-1 blueliner was relatively unknown when he moved from the USHL to the NCAA two years ago. “He’s getting a ton of attention,” said his assistant coach, just months after his college debut in 2016.

Because of NCAA regulations, each player will need to wait until the end of their season before signing an NHL contract to maintain college eligibility.