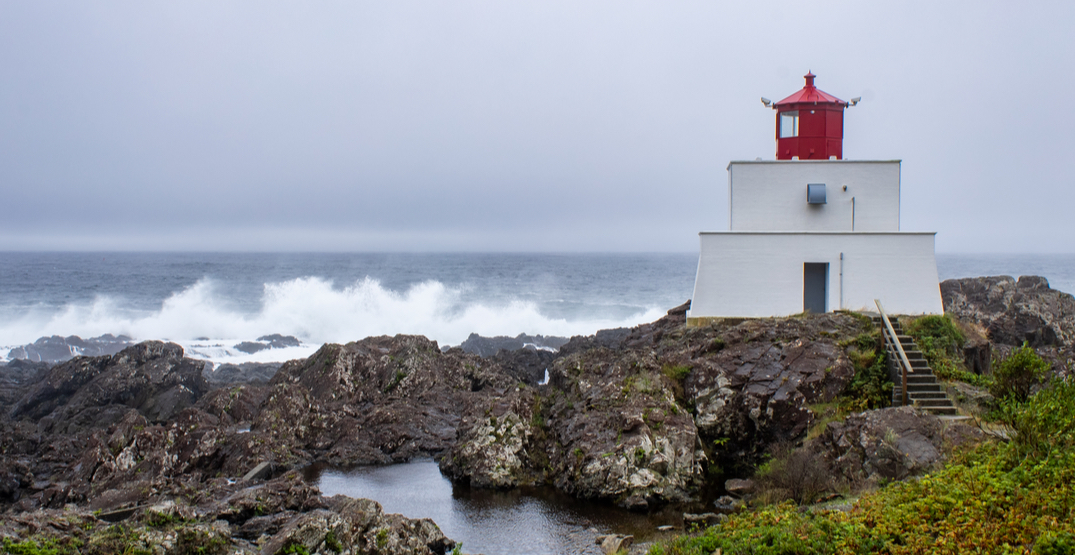 They lead solitary lives, isolated for months on tiny islets and craggy ocean bluffs. Yet despite their remote locations, Canada’s reclusive lighthouse keepers have one of the highest voter turnouts in the country – thanks to a part-time election official who flew in their ballots by helicopter.

Vlasta Booth, who usually runs a chocolate shop in Victoria, delivered ballots to 27 lighthouses off the coast of BC, by chopper last week.

The mother of two braved fog and stormy weather, and the risk that her portable ballot box might become sodden with ocean spray, to ensure that B.C. lighthouse personnel could cast their votes before the deadline.

Booth, 49, who works as a service agent for Elections Canada during federal campaigns, flew in a coast guard helicopter to meet 67 lighthouse keepers and allow them to legally vote.

Wearing a survival suit, she landed on some of the remotest locations in Canada, including a “rock” in the middle of the ocean.

She admits that the experience, which she calls “an adventure,” could be “nerve wracking.” Booth was shown how to operate a GPS device in case the bright-red helicopter ditched and a rescue team needed to locate her.

“It is hard to put into words how awesome this experience is,” Booth said. “We met light keepers that have been doing this work for several decades and they themselves have never been to all 27 of them. It is truly a grand tour.”

Booth spotted humpback whales on the way to a lighthouse in Haida Gwaii, an archipelago off the coast of BC, and was stranded at one lighthouse for hours due to fog.

Hazardous conditions grounded Booth and the helicopter pilot on Egg Island, a tiny islet where they had “tea and muffins” with the resident lighthouse keepers, while they waited for the weather to clear.

The helicopter pilot also had to stop for several hours to refuel at an Indigenous community in Shearwater on Denny Island, in the territory of the Heiltsuk Nation.

Despite the challenge of reaching some of Canada’s most remote residents, Booth said she had “100 percent success.” She delivered special ballots to every occupied lighthouse off the coast of B.C. during the five-day mission, and has now sent their votes back to Ottawa to be counted.

Booth met the lighthouse keepers on their helipads, registering them to vote while rotor blades whirred in the background. After checking their IDs, she handed them ballots. Then, after giving them the privacy to cast their votes in a portable ballot box, she flew off. Most special ballots are mailed in by voters, but in this case Booth said: “I was the mail man.”

“There is always a paranoia of things blowing away on a helipad,” she said, recounting the adventure. “But I spend the night before ensuring I have all my supplies and everything is in good order. We actually did bring a ballot box.”

She wrapped the ballot box in a heavy-duty garbage bag to stop it getting soaked by ocean spray.

Booth also brought a laptop and USB drive containing the constituencies of every address in Canada, so she could register the lighthouse personnel in the correct riding.

Most listed the lighthouse as their home address, voting in B.C. constituencies. But a number of “relief” lighthouse keepers voted by special ballot in their home ridings, including one in Saskatchewan.

“Most of them we did on the helipad, because of time and efficiency. It usually took about ten minutes,” she said. “Once or twice there was time for a cup of tea.”

B.C. has 27 occupied lighthouses, stretching from the tip of Vancouver Island to near the border of Alaska, operated by pairs of lighthouse keepers who work in shifts to prevent boats from foundering. They also send out weather reports and check coastal water temperature.

The Canadian Coast Guard, which is responsible for the lighthouses, flies in mail and groceries about once a month.

Booth said people had asked her why the lighthouse keepers couldn’t vote by mail.

“The simple answer is these light keepers get their mail about once a month – by helicopter,” she said in an email.

During the five-day election expedition, every one of these lighthouses was paid a visit. They included Langara Point Lighthouse, situated atop a bluff on the northwest corner of Langara island, in Haida Gwaii.

Boat Bluff lighthouse, located at the end of Sarah Island on the Inside Passage of B.C., was another stop. The remote station was established in 1907 and is still operational.

Outside of election time, Booth runs a bespoke chocolate shop with her husband, a chocolatier, in Victoria. She admits she was “very brave” to visit such remote locations in a helicopter.

Of all the federal election staff in Canada, she said she had “the coolest job of everybody.”

But Booth is not the only election agent to have braved the elements to get ballots to Canadians in remote locations.

On September 14, just before the deadline to apply for mail ballots, a poll worker flew by helicopter to Bloodvein First Nation, 200 kilometres north of Winnipeg. Around 27 engineers, staying in the. Indigenous community to help restore electricity, were registered to vote by mail. They would not have made it home in time for polling day.