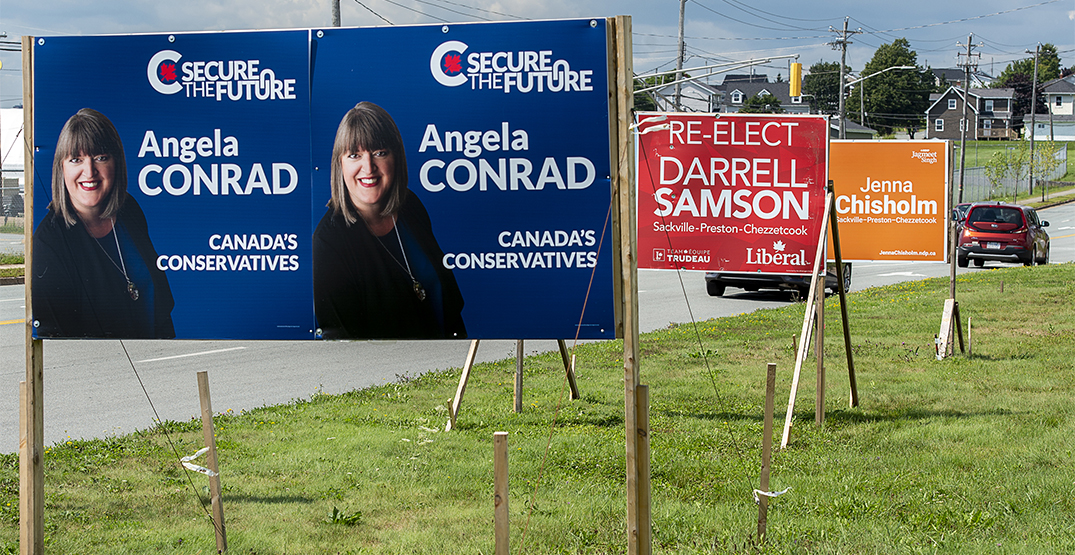 Political parties put up election signs on streets to keep up with each other and to build momentum, even though one expert says there is little data to prove this tactic has any impact on the parties’ winning chances.

The use of plastic and paper election signs shows how traditional campaign strategies are still important despite the rise of online efforts in recent elections, said Carleton University professor Jonathan Malloy.

“To get voters’ attention, you often have to go offline. You’d have to use physical signs, paper or plastic. You need some tangible, physical things,” he said.

“Putting a sign on the street, on the road is a way to make sure to catch voters’ attention in a way that’s different from social media. They are impossible to avoid and they are very simple, of course they definitely have the name (of the candidate) and the party and a picture, not much else on them.”

The content of the signs indicates what the candidate’s campaign is focusing on, whether that is the local candidate, the party leader or the policies of the party, he said.

“The Liberals certainly have a design that emphasizes Mr. Trudeau’s name right at the top, and they’ve been doing that for the last three elections, they’ve been emphasizing the Trudeau name,” he said.

“I haven’t seen a Conservative sign that says Erin O’Toole on it. They may be there though. Obviously I’d have to go across the country to look everywhere.”

Malloy said there isn’t a lot of research on this because studying the effectiveness of signs during a campaign would require gathering a lot of data on the number of signs that were used in an election and how that impacted the outcome of that vote.

“From what I can tell, it is pretty anecdotal, rather than data-driven.”

Duane Bratt, a political-science professor at Mount Royal University in Calgary, is one of very few researchers in Canada who studied the relation between political signs and election turnout and results.

Bratt and other researchers counted all the lawn signs used in three provincial byelections in Alberta in 2014 and the Calgary Centre riding in the 2015 federal election.

“We used a group of student volunteers and we drove around every riding and counted the signs in the last week of the campaign, and showed that there was a correlation between the number of signs for a party and their overall vote toll,” he said.

“We had four cases, three of which accurately predicted the order of finish and predicted the winner. The fourth, we were incorrect on, but the fourth case also had the lowest amount of lawn signs.”

He said the ridings that had the largest number of election signs saw the highest turnout rates.

“The more lawn signs that you see, the higher the turnout? and if a party leads (in the number of) signs, it is more likely to to win the election,” he said.

“Parties spend a lot of money and a lot of volunteer hours putting up signs. So, obviously parties believe that signs matter.”

A Green Party spokesman said the party is collecting data on how many signs its candidates have put up during the campaign but an accurate number won’t be available until after the election.

John Chenery said the party provides design templates that local campaigns use after adding the candidate name and photo.

“Many campaigns use the standard design but others create their own unique designs,” he said.

The Liberals, the Conservatives and the NDP didn’t respond to requests for comment on the role of lawn and street signs in their campaigns.

There are no rules in the Canada Elections Act on the content of campaign signs, but all campaigning messages, including election signs, must have a line that states who has authorized the message.

“A candidate’s or political party’s official agent must authorize candidate signs. If the advertising was placed by a third party, it must include the third party’s name, telephone number, and physical or internet address,” Elections Canada says on its website.

Malloy said the considerations of cost and practicality determine whether the signs include pictures of the candidate or the party leader or both.

He said signs tend also to be different across the country.

“In Quebec the signs are completely different than the rest of Canada. They are generally not on bonds on both sides. They are usually bigger, higher quality posters and they’re taped on the lampposts and things and they almost always show the party leader,” he said.

He said the fact that the Green Party uses traditional election signs despite the environmental effect shows how important it is for the party and its candidates to keep up with other parties by putting up physical signs on the streets.

Chenery of the Green Party said the negative impact of election signs on the environment is a concern to the party.

“Many of our campaigns go to great lengths to source signs made from recyclable plastic or, in some cases, strong paper or cardboard materials,” he said.

“Other campaigns that purchase coroplast (corrugated plastic sheets) make a limited number of candidate-specific and the rest (are) generic signs that can be stored and used again in future elections.”