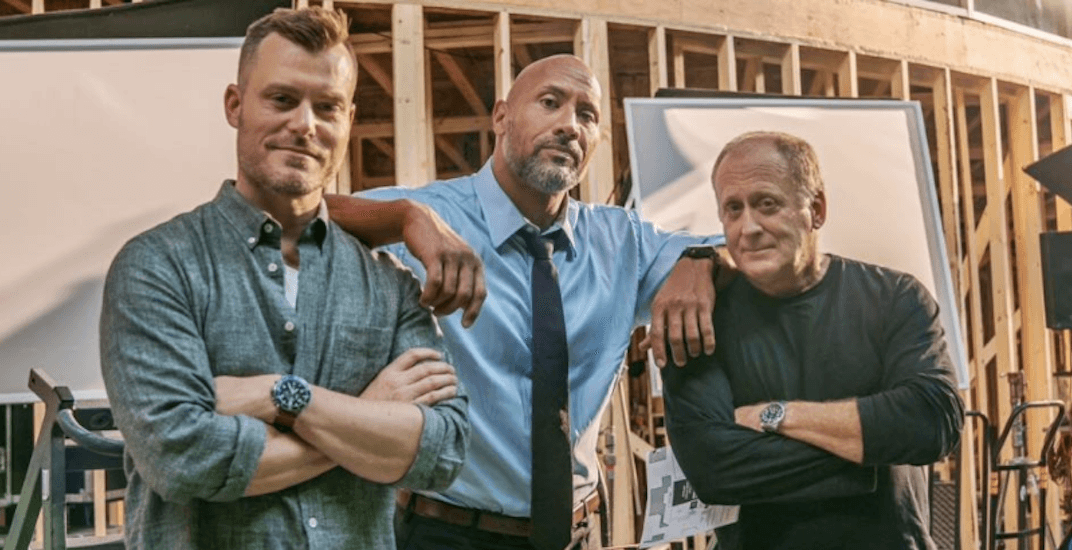 Everyone’s favourite boulder may just be spotted around Vancouver in the next few weeks, as Dwayne “The Rock” Johnson films his new movie Skyscraper.

Vancouver will be filling in for a Chinese city in what is described as a “hostage-action-thriller” on IMDB.com, and Johnson hasn’t been shy on social media about what he’s up to.

Sometimes the goal we’ve worked our ass off for years is never achieved. Then years later we look back and realize, it’s the best thing that NEVER happened.

Sharing a video on Instagram—with a background showing Vancouver’s notoriously hazy skies from last week—The Rock explained his love for this city, how he’s dropped his “blood and sweat” in Vancouver, his time playing for the Calgary Stampeders against the BC Lions, and how playing in the NFL was the best thing that never happened to him.

He recently posted another photo showing him with the director of Skyscraper as well as the cinematographer for the movie, with a caption saying that they are “Takin’ it to new heights, literally.”

Dream team. Officially kicking off DAY 1 of shooting our action thriller #SKYSCRAPER. To my right, our director/writer @RawsonThurber. To my left, the real star of our movie, legendary cinematographer and Oscar winner, #RobertElswit. From ROGUE NATION and GHOST PROTOCOL to MICHAEL CLAYTON to THE TOWN and to his Oscar win for one of my favorite films, THERE WILL BE BLOOD. Robert’s on the Mt. Rushmore of Cinematographers and I’m grateful and inspired to work with this legendary bad ass. What a dream team and crew I’m honored to create and drop sweat with. Day 1 and takin’ it to new heights. Literally. #TallestBuildingInTheWorld #SKYSCRAPER #Day1 #ThurberJohnsonElswit

Other members of the cast and crew have also shared glimpses into the production of Skyscraper, which is set to be released on July 13, 2018, according to IMDB.

It’s official! Day One of #SKYSCRAPER 🌆 is in the can and we’re well under way to making a memorable and epic action thriller! 👏🏻💪🏻 Shout out to @flynnpictureco and @hhgarcia41 for making it a true pleasure to come to work every day and taking me under their (very large) producer wings. 😉Can’t wait to open the doors and let you in to explore all 226 (😱) floors of the world’s tallest building 🏙⛅️, the next modern marvel, The Pearl. July 13 2018 🎆🎇 here we come! #TeamworkMakesTheDreamWork #TallManSandwich #LookUp @rawsonthurber @therock @nevecampbell @thechinhan @roland_moller @flynnpictureco @sevenbucksprod @danygarciaco @legendary @universalpictures @lexinthesky

What an amazing first week of filming on our #SKYSCRAPER movie! @TheRock & #NeveCambell delivering that movie magic. #BNW @SevenBucksProd pic.twitter.com/bWtOdCfXgB

The amazing #RobertElswit working with one of our stand ins to line up the shot. #BTS #a7rii #a7r #SKYSCRAPER #BNW pic.twitter.com/qEKYwmLXXB

So be sure to keep your eyes open (and possibly upwards) for a chance to see The Rock in Vancouver.