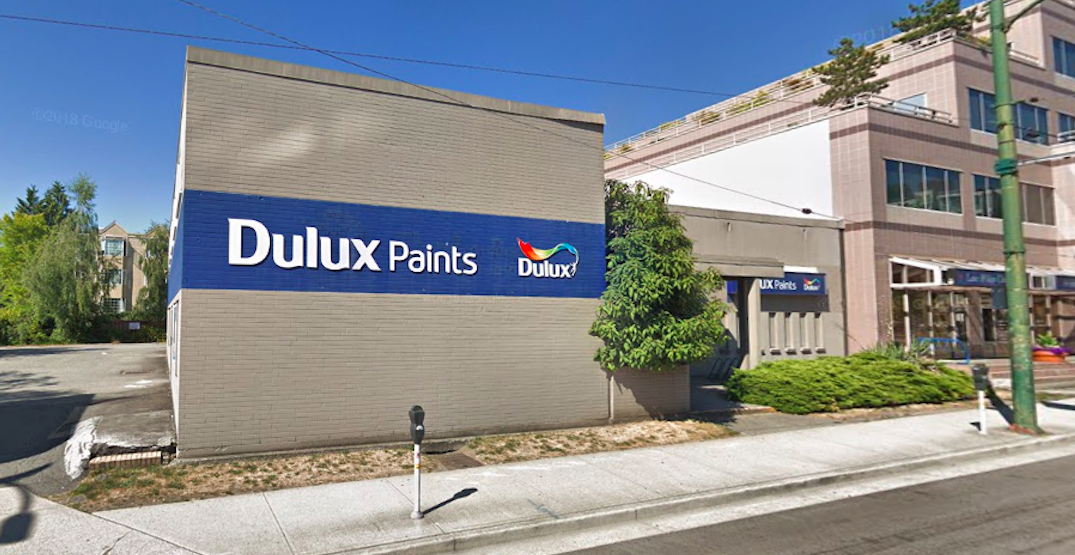 Blaming the city’s rising property taxes for its decision, operators of a longtime fixture on West Broadway have announced they are closing up shop.

Located at 2091 West Broadway, Dulux Paints has been a mainstay in the area for the last 50 years.

However, the store will be closed for good as of the end of this month.

Noting that this will ultimately equal a tax of $225,000 for the 5,135-sq-ft store, Rimmer said that going forward, it’s “impossible for our business to continue to afford the space and operate profitably.”

He noted that the tax rate at this particular store’s location is “more than double some of our other stores in the city.”

Much of this may have to do with the paint shop’s immediate adjacency to the future Arbutus Station of the Millennium Line’s Broadway Extension, which has caused property values to rise across the Broadway Corridor – especially around the locations of the future stations.

The Dulux Paints history in this location dates back to the early 1970s.

The premise was originally a funeral parlour and then a bakery, before it became a paint store when then British American Paint Company (BAPCO) took over the lease.

BAPCO was acquired by CIL a few years later, later marketed under the Glidden and ICI Paint banners, before becoming the current Dulux Paints in 2011.

“We want to thank our amazing employees for their hard work and dedication over the years, and our loyal customers for their patronage,” said Rimmer. “This was a wonderful location and it is with considerable regret that we leave it.”

However, he added,  “our great staff will be absorbed in our other locations and we look forward to continuing to provide all our customers with the excellent service they have enjoyed at West Broadway in our other Vancouver locations.”

Rimmer said that two nearby Dulux Paints stores – at 2630 Main Street and 1920 Kingsway – are “prepared and ready to serve all of the former West Broadway customers.”

Despite the closure, Dulux Paints said it remains committed to adding more stores in the Greater Vancouver area.

Dulux Paints are manufactured in Delta, BC, Concord Ontario and Beauport Quebec.