Shocking figures released by the BC Coroner’s Service today reveal that 142 people died of illicit drug use in the province during December.

It’s a shocking figure on its own, but to put that into context, that works out as an average of nine deaths every two days.

The number was the highest ever recorded for a single month in BC. The December deaths bring the total for 2016 to 914, a staggering 80% increase on 2015’s statistics.

The year-end data show that more than half of those who died were aged between 30 and 49, while four out of five were men and boys.

The report found weekends were the most common days for drug overdose deaths in 2016, and 89.9% of all illicit drug deaths took place indoors.

Some 61.3% were in private residences, while 28.7% were at other indoors locations, compared to just 9.2% outdoors, in vehicles, sidewalks, streets, parks etc.

The report also noted there were no deaths recorded at supervised drug consumption or drug overdose prevention sites.

Vancouver and Surrey, alongside Victoria, were noted as the three “townships” where most illicit drug deaths occurred in the province. 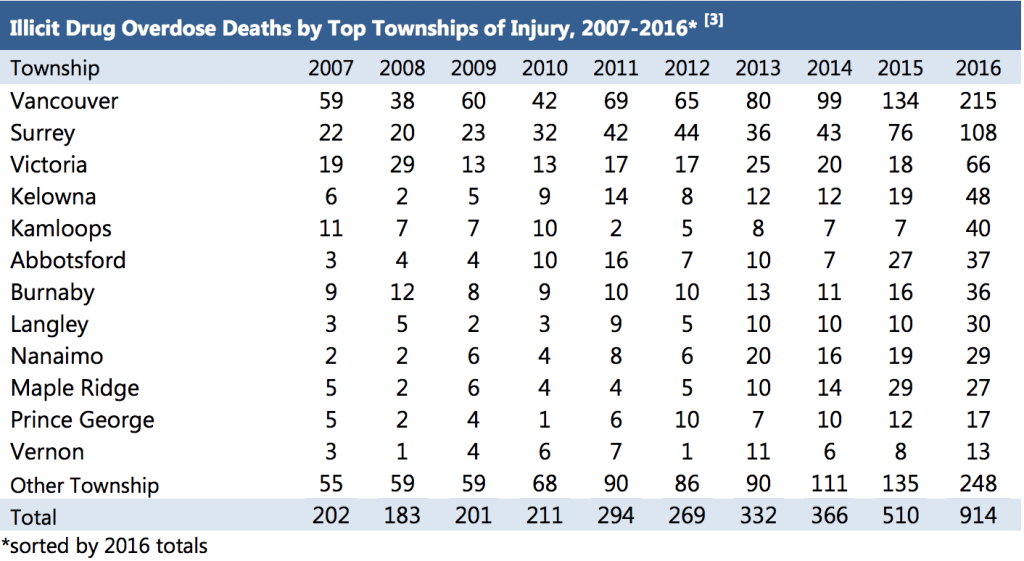 “We recognize that those who are suffering from drug dependency are not going to be able to abstain immediately from drug use,” said chief coroner Lisa Lapointe.

“Given the increasing risk of contaminated drugs and the growing number of fatalities, though, we urge them to use illicit drugs only in the presence of medical expertise or, at the very least, a sober person with access to, and training in, the use of naloxone.”

“For those who are not drug dependent, we strongly advise you to avoid experimentation and the casual use of illicit drugs,” she added. “The risks are now unmanageable.”

The BC Coroners service did not release data on the proportion of people whose deaths were related to fentanyl, however, those figures should be available in March.

The service did stress that fatalities are not just occurring amongst those who use opioids, warning that cocaine and methamphetamines were also being found in a high percentage of deaths in 2016.

“The preventable overdose deaths of 215 people in Vancouver – and 914 across BC in 2016 – is staggering and heartbreaking,” Mayor Gregor Robertson said in a statement. “It has never been more urgent to act. The intensity and frequency of the emergency calls is putting a severe strain on our first responders, and is not sustainable. Better access to addictions treatment and detox on demand is a crucial to save lives and reduce the intense burden on front-line workers.”