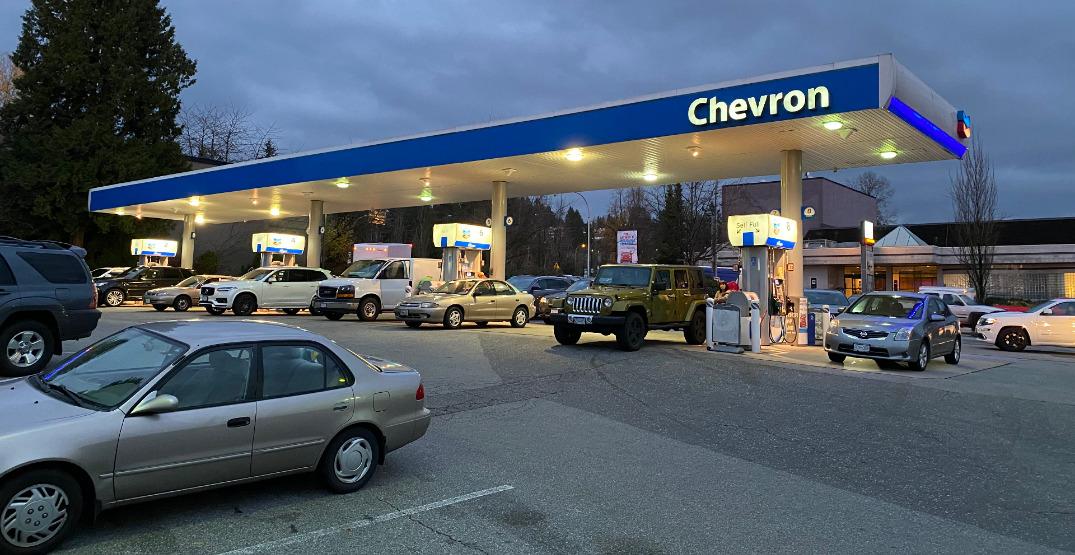 A Chevron in North Vancouver. (@CyndiGerlach/Twitter)

Less than an hour after the BC government announced restrictions on gas consumption, long lineups could already be seen at gas stations across the Lower Mainland.

The measure, which was announced by Public Safety Minister Mike Farnworth, limits gasoline for non-essential vehicles.

Members of the general public will be limited to 30 litres of gasoline per visit to a gas station.

Residents are already sharing videos and photos of long lineups forming around the Lower Mainland, and some drivers have even been spotted filling up jerry cans.

Lineups have been spotted in North Vancouver, Port Moody, Burnaby and other areas of Metro Vancouver.

The province is regulating the order through an honour system, with the belief that the majority of people will use the amount they’ve been allotted.

No Gas in metrotown pic.twitter.com/dPpPgfTJ4j

“The majority of people will do the right thing,” said Public Safety Minister Mike Farnworth. “If we are greedy we will fail.”

Well.. judging by traffic on #BChwy99 North to #Vancouver, it won’t take long for us to run out of gas… backed up beyond the #DeltaBC works yard.#traffic #delays #congestion @AM730Traffic

The order on restrictions will remain in place until December 1, 2021.

This is the Costco in Poco. Lineup starting in parking lot before you get to gas bar area. pic.twitter.com/dYllR34FL4

Many are also reporting that stations have completely run out of supply.

Well then… Guess they announced fuel rationing this afternoon while I was asleep. 30L (8 gal) max at gas stations. N some already closed here in Metro Vancouver cuz they ran out #BCstorm

Dan McTeague with Gas Price Wizard suggests that the worst may be yet to come.

Told them this would likely happen

There won’t be 30 litres for anyone after Wednesday. Even US refineries rely on the TransMountainPipeline for oil.