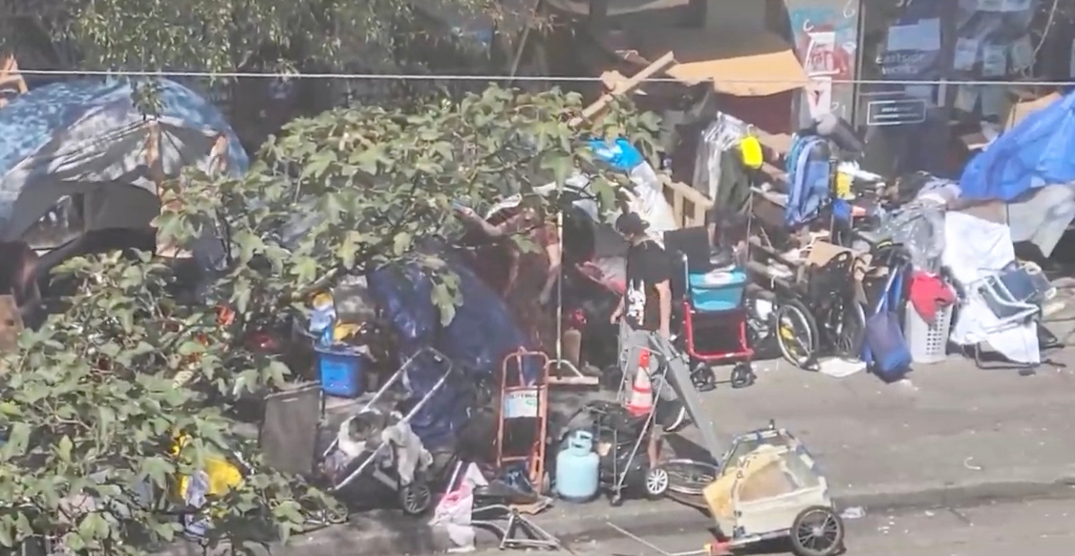 Downtown Eastside campers on East Hastings have been given notice to move voluntarily by the City of Vancouver.

In the aftermath of a video Daily Hive shared from a user on YouTube named Debbie Hellion and the Apocalypse, a bulletin from the City of Vancouver suggested that it ordered the removal of a homeless encampment in the Downtown Eastside that has continually grown in size, creating safety issues and a potential fire hazard.

Initial reports suggested that the decampment had a deadline of this week, but plans seem to have changed.

In a new statement from the City to Daily Hive, the first phase of the process takes place between July 27 and August 2. This phase focuses on “providing people with information and voluntary removal.”

“The second phase, anticipated to begin on August 3rd, will include City staff support for the removal of structures. We will have more information to share on this when it becomes available.”

The statement adds that City representatives are distributing leaflets to each tent with information on the next steps. The information in the notice will also be available to people on East Hastings this Friday through posters that are going to be put up.

“The City is committed to providing details on steps that will be taken within these timelines to those sheltering on East Hastings and adjacent streets as it becomes available.”

Debbie Hellion has been posting videos since the announcement of the planned decampment. She was able to capture a video of notices being given out:

The next day, she didn’t seem to be too happy with the progress. Keep in mind that this video contains obscene language:

Once the voluntary time frame ends, it remains to be seen where these campers will be moved.