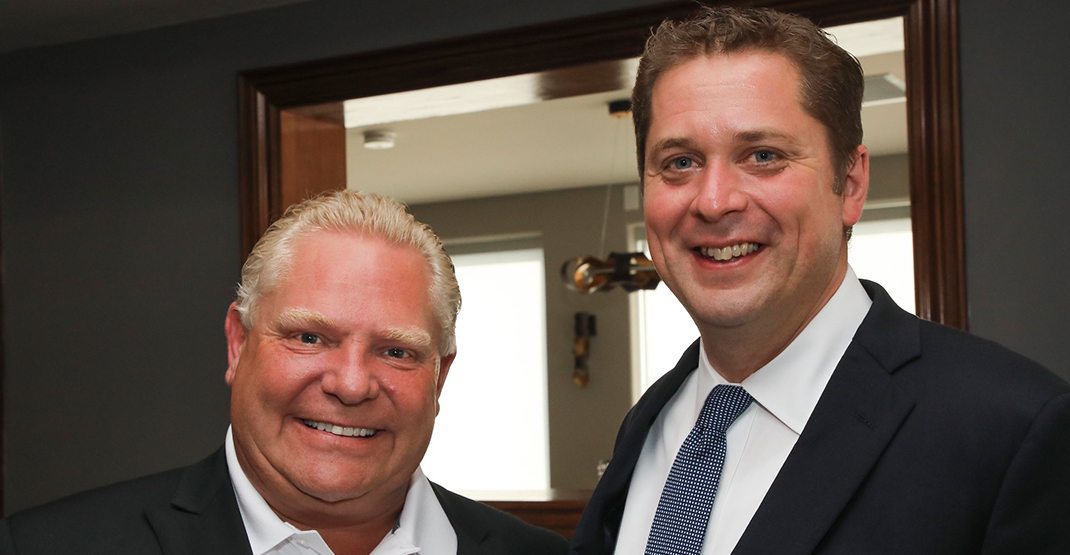 Doug Ford may have kept his promise to stay out of the federal election spotlight, but it was inevitable that he would be front and centre anyway.

Liberal Leader Justin Trudeau has seized onto the Ontario premier’s tanking popularity and tried to anchor it to federal Conservative Leader Andrew Scheer, invoking Ford’s name at every turn as a harbinger of Conservative doom and gloom.

“He’s Premier Bogeyman,” said Scott Reid, a former adviser to Liberal prime minister Paul Martin. “For the Liberals that means he’s a walking, talking, sometimes shouting, example to voters in Ontario of what you’ll get federally if you vote for Andrew Scheer.”

Ford’s Progressive Conservatives won a majority government last summer after a campaign full of populist promises such as cheaper gas, buck-a-beer and lower taxes. But his cuts to services and programs like legal aid, student loans, tree planting and public health have angered many in the province.

Recent polling has his approval ratings in the 20s and 30s, and Abacus Data found in July that 65% of Ontarians had a negative impression of Ford, up from 48% last October.

Trudeau has been suggesting that Ford and Scheer are one in the same, saying often that Conservatives promise to be “for the people” — a nod to Ford’s campaign slogan — but make cuts once in office.

“Exhibit A? Doug Ford,” Trudeau said Wednesday. “Larger classes for your kids and less support for your communities. That’s the real cost of buck-a-beer. And now, Andrew Scheer wants Canadians to double down on Conservative politicians like Doug Ford.”

The Liberals have also pledged to fund programs that Ford’s government cut, including the tree-planting program and refugee and immigration legal aid services. Trudeau also waded into a labour dispute between the province and its education workers earlier this week, holding a photo op with teachers on a day that schools were set to close due to a strike that was averted at the last minute.

Amanda Galbraith, a principal at communications firm Navigator and a former Conservative staffer, said the Liberals need to demonize someone to whip up their base and motivate voters, and Ford has a higher profile than Scheer in Ontario.

“I think you’re going to see the prime minister campaign against the premier and not the Opposition leader, which I think says a lot about how he feels about his chances against campaigning head to head with that Opposition leader,” she said.

Scheer has not appeared with Ford — or mentioned the premier’s name — during the campaign. He has said that he is ready to run against Trudeau, but the Liberal leader is desperate to run against anyone other than him.

Ford has been noticeably absent from the public eye, making himself available to answer journalists’ questions just once since the election campaign began on Sept. 11. The legislature was supposed to return from a summer break in early September, but Ford
recessed it until after the election. His office doesn’t release his itineraries, but his social media posts show him making only a handful of public appearances, largely at community barbecues and parties.

That is in stark contrast to Alberta Premier Jason Kenney, who has been actively campaigning for Scheer, including in Ford’s own west-Toronto stomping grounds.

Ford’s poll numbers are just one factor why Scheer is not campaigning arm-in-arm with him, said Galbraith. The Conservatives need to define Scheer as his own person, she said.

Barry Kay, a political science professor at Wilfrid Laurier University, said voters don’t yet have a strong sense of Scheer.

“In Ontario, people don’t know who he is, and that’s given the Liberals the opportunity to tie him to a very unpopular premier,” he said.

David Coletto, the CEO of Abacus Data, said not only is Ford a factor in Ontario, but nationally. Abacus did some recent polling on the profile of several premiers, and while most Canadians said they didn’t know enough about the premiers of Alberta, British Columbia and Quebec, just 10% said they didn’t know enough to form an opinion of Ford — and 54 had a negative impression.

“You compare Doug Ford to even the four major party leaders federally, he is more unpopular nationally than any of them,” Coletto said.

Provincially, Ford has lost the support of about 15% of those who voted for him last year, Coletto’s polling has found. Federally, there is a slice of about 10% of voters who
supported Ford in the last Ontario election but voted Liberal in the last federal election.

“The sheer unpopularity of the premier with those kind of key swing voters…that’s the key group,” Coletto said. “They have been for the most part turned off by a lot of what Doug Ford has done. He may get them back in time for his election, but I’m not sure he’s helping Andrew Scheer right now.”