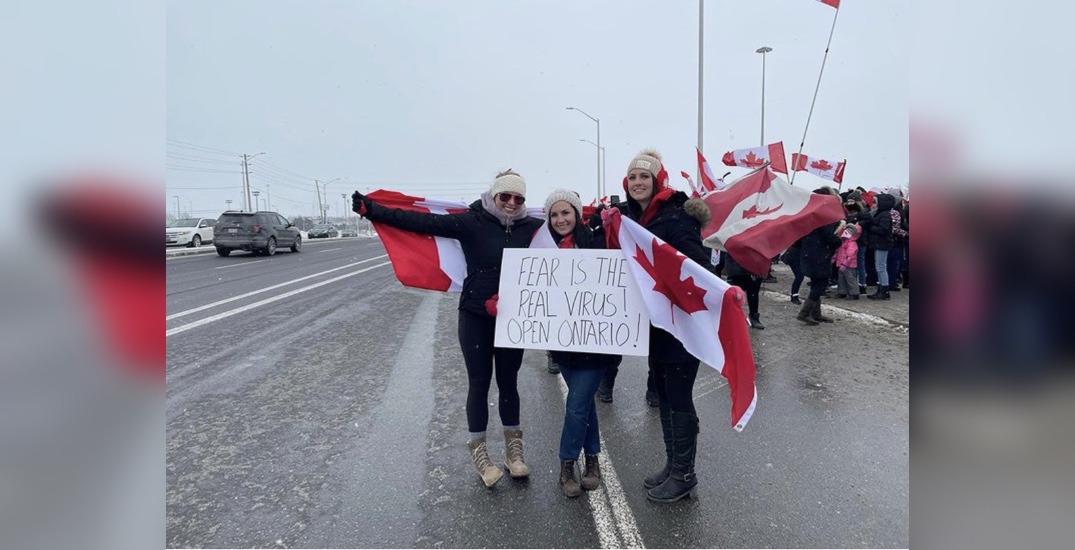 Krista Haynes, daughter of Premier Doug Ford, showed her support for the “freedom convoy” making its way to the nation’s capital.

Haynes, whose husband was a police officer until he was let go for violating the Toronto Police Service vaccine mandate, showed up in Milton, Ontario as the convoy was coming through.

Haynes shared images of the groups who had gathered to wave flags as the convoys passed by. She referred to the groups as “big” and said there was an “amazing turnout.” While it’s not clear how many people they anticipated, based on the photos it does not appear that the crowds are larger than some of the lineups for PCR testing.

Haynes has been outspoken about vaccine mandates since they came into effect. Her Instagram posts of the convoy have garnered more than 11,000 likes.

The convoy claims to be peaceful, but a number of members have made threats of violence towards journalists and anyone in opposition to the convoy.

A GoFundMe for the convoy has raised more than $6 million. The convoy will arrive at their Ottawa destination on Friday. It is not clear what their plans are at this stage as Ontario is still under a sort of lockdown and most places are closed for indoor access.

On Thursday, Prime Minister Justin Trudeau tweeted that he’d been exposed to COVID-19 and would be isolating for five days. Haynes shared a screenshot of the tweet on her Instagram stories with the caption “Look out for the actors and do not engage.”

While the organizer of the convoy said it’s not affiliated with any hate groups, the Canadian Anti-Hate Network has found connections to far-right groups, Islamophobia, anti-Semitism, and racism. During their investigation into the group they began receiving anti-Semitic emails.

The so-called ‘freedom convoy’ that has raised over $6m is a far-right project. If you look at the #FluTrucksKlan organizers and promoters, you’ll find Islamophobia, antisemitism, racism, and incitements to violence.#freedomconvoy #flutruxklan #cdnpoli https://t.co/qMltVw49NR

The Canadian Trucker Alliance has spoken out against the convoy.

Nearly 90% of truckers in Canada are vaccinated, and most of the country’s truckers are still at work, not participating in the convoy. While there are some large trucks in the convoy, most of the people have turned out in personal vehicles.