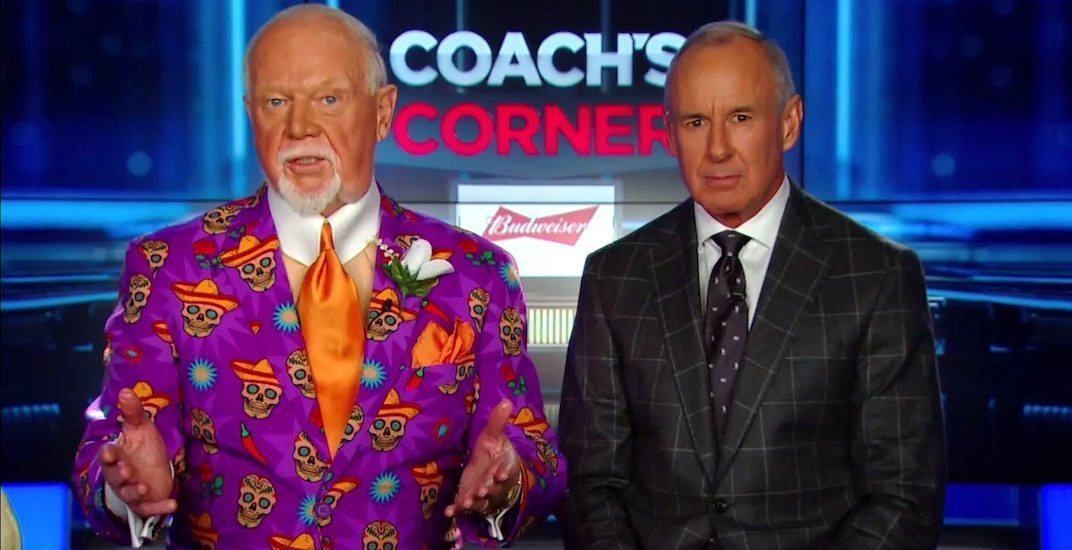 While Canadians are still coming to grips with Don Cherry’s dismissal after nearly 40 years on Hockey Night in Canada, one oddsmaker has its sights set on his next landing spot.

At 85 years old, retirement seems like the most likely solution for Cherry, unless his supporters find a way to change the minds of Rogers executives.

Sportsbettingdime.com has set the odds for what Cherry will do next, with him working for another media organization (3/1) listed as the most likely outcome – ahead of retirement (5/1).

Other options, according to the oddsmaker, include going into politics (8/1), starting a YouTube channel (15/1), and getting back into coaching a pro hockey team (200/1).

Mike Babcock’s on the hot seat with the Toronto Maple Leafs, right?

Seriously though, should Cherry stay in media, TSN (5/1) is his most likely landing spot according to the oddsmaker, ahead of American NHL rights-holder NBCSN.

Fox News, who interviewed Cherry on Tuesday, is the long shot at 45/1.

Of course, much of the talk surrounding Cherry’s dismissal has regarded who will replace him alongside Ron MacLean next week. We took a look at 16 names (some serious, some not so serious) yesterday.

Former NHL GM-turned-broadcaster Brian Burke (3/2) is the leading candidate according to the oddsmaker. 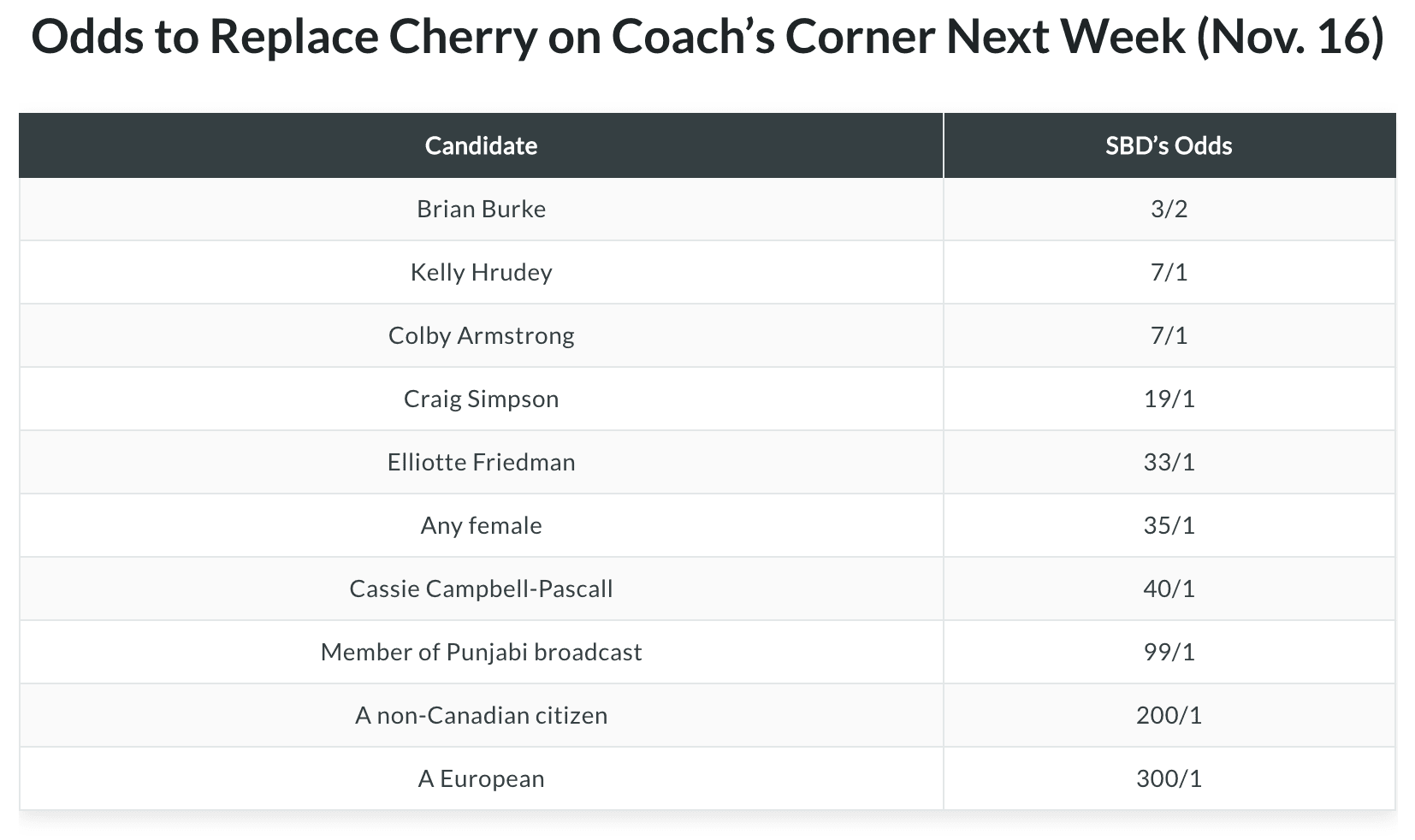 Burke is also leading the way for odds to replace Cherry next season, with other candidates like former players Wendel Clark, Tie Domi, Marty McSorley, and Scott Stevens listed as long shots. 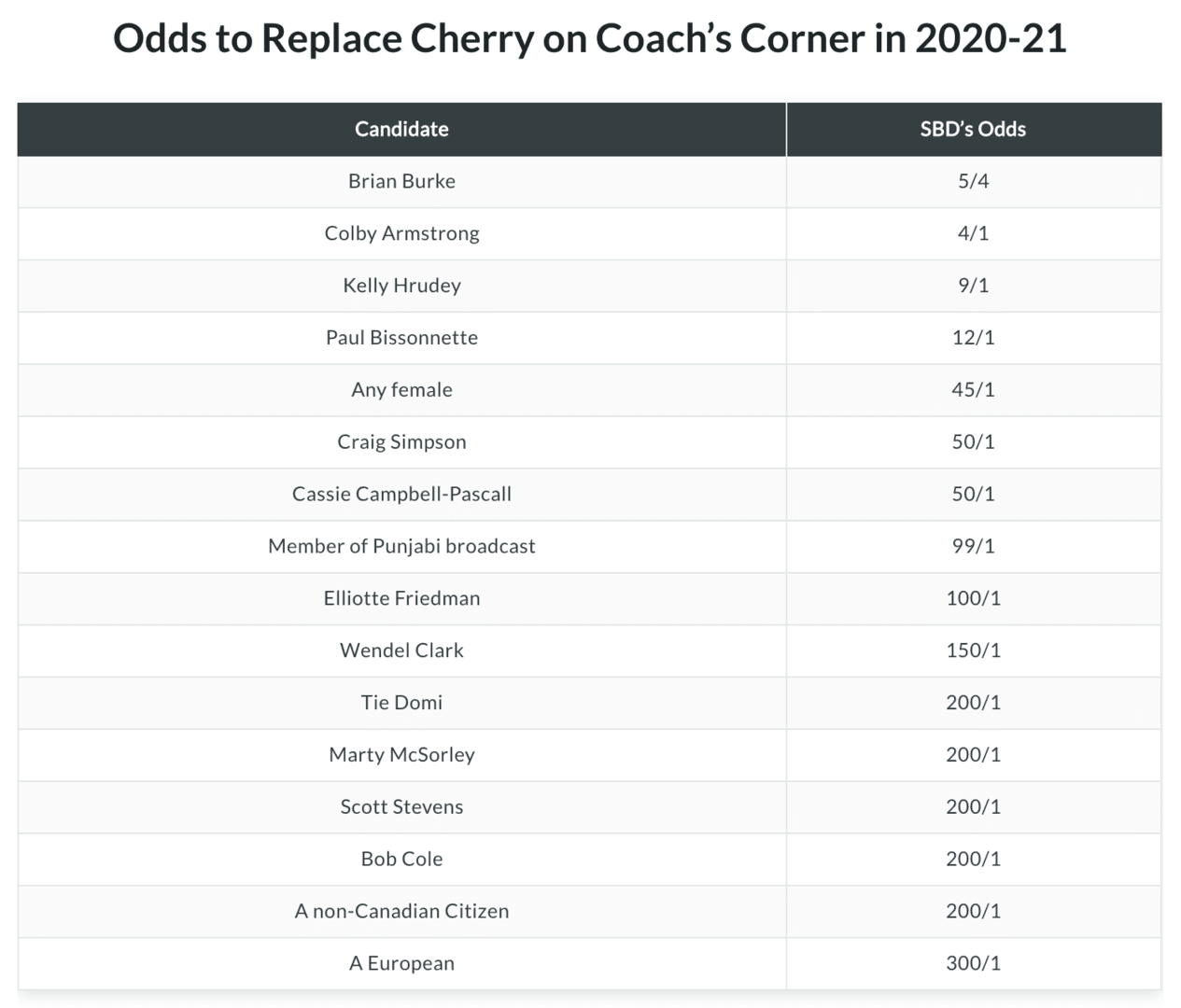 It’ll be interesting to see how Sportsnet handles Saturday’s broadcast, because they’ll need to address the issue.

Cherry is irreplaceable, so keeping the Coach’s Corner segment would seem unlikely — but they’ll have to fill the air with something during the first intermission.