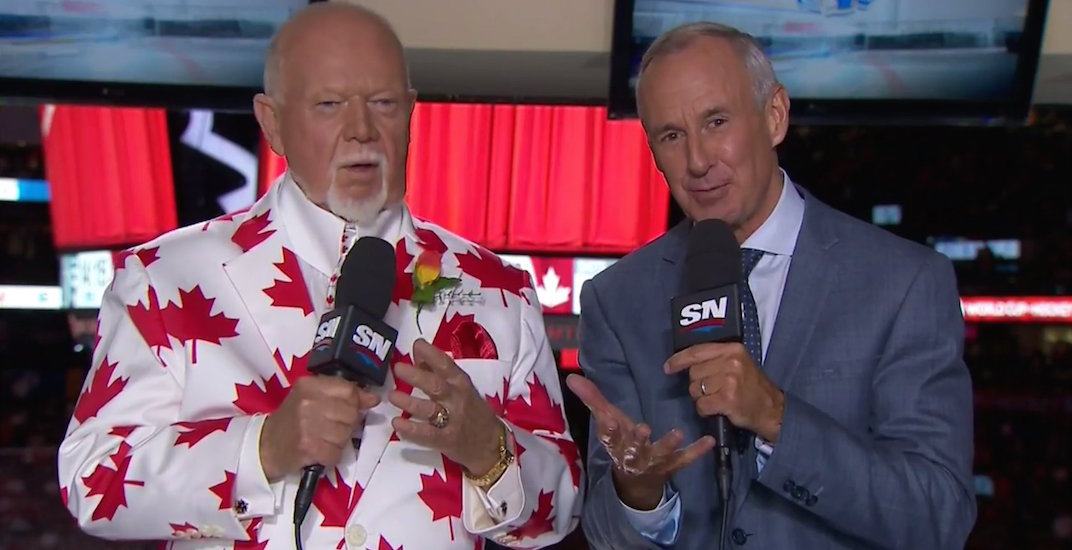 Don Cherry has been let go from Hockey Night in Canada.

Sportsnet President Bart Yabsley made the announcement on Monday, two days after the 85-year-old’s disparaging remarks about immigrants.

“Sports brings people together – it unites us, not divides us,” Yabsley said in a media release. “Following further discussions with Don Cherry after Saturday night’s broadcast, it has been decided it is the right time for him to immediately step down.”

“During the broadcast, he made divisive remarks that do not represent our values or what we stand for,” the release said.

“Don is synonymous with hockey and has played an integral role in growing the game over the past 40 years. We would like to thank Don for his contributions to hockey and sports broadcasting in Canada.”

Don Cherry stirs controversy with rant on immigrants not wearing poppies. “You people love… that come here.. you love our way of life, you love our milk and honey, at least you could pay a couple of bucks for a poppy…” #HNIC pic.twitter.com/r3WQ0ZalaJ

That Cherry went on a non-hockey related rant during his first intermission segment was not unusual. He’s been doing that forever, and he always makes a point about Canadians wearing a poppy for Remembrance Day.

But this time, Cherry’s rant had an anti-immigrant flavour to it.

“You people… you love our way of life, you love our milk and honey, at least you can pay a couple bucks for a poppy or something like that,” Cherry said while his co-host Ron MacLean looked on.

Cherry’s remarks have been condemned by many people in the hockey world, including his longtime friend MacLean, who was under fire himself for nodding and giving a thumbs up during Cherry’s rant.

A former NHL player and coach, Cherry rose to superstardom as an outspoken television broadcaster. He was first hired by CBC in 1980, and had been a fixture on Hockey Night in Canada ever since.

Cherry’s popularity may have peaked in 2004, when he was voted the seventh greatest Canadian of all-time, ahead of the likes of Sir John A. Macdonald, Alexander Graham Bell, and Wayne Gretzky.