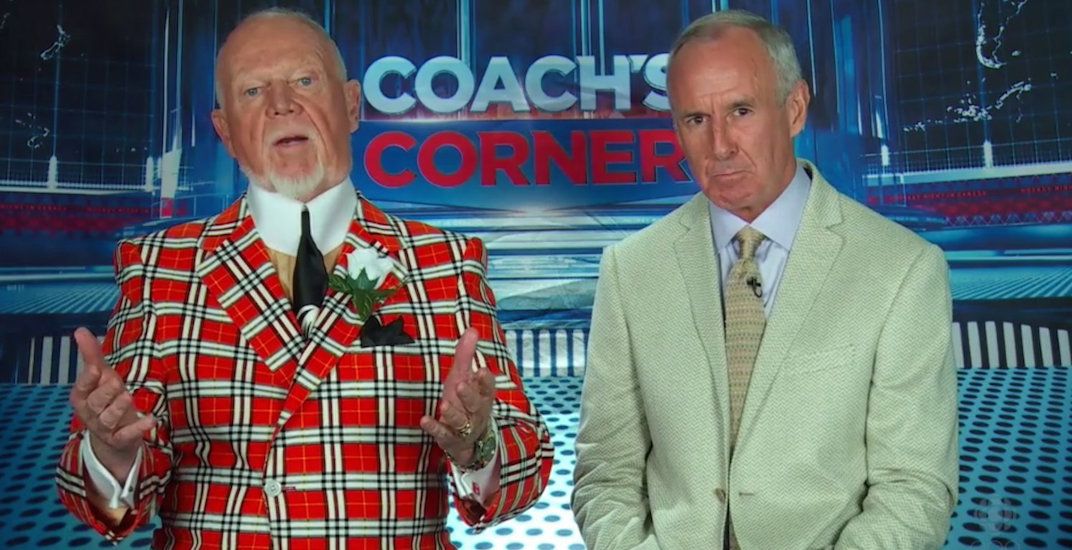 There may not be a more recognizable person in Canada.

The loud suits. The booming voice. The giant collar.

Like him or not – and I can already see the hate comments on our Facebook page – but Don Cherry is a hockey icon.

He’s a Canadian icon, too.

In 2004, CBC ran a series that tried to determine the greatest Canadian of all-time. Appropriately named The Greatest Canadian, Tommy Douglas, Terry Fox, and Pierre Trudeau finished in the top-three in voting.

Nobody from the world of hockey finished higher than Cherry, who came in seventh-place – two spots ahead of Wayne Gretzky.

The Hockey Hall of Fame will induct seven new members this weekend in Toronto, and once again, Cherry will not be one of them.

The 83-year-old has dedicated his entire life to hockey. He began as a player during the days of the Original 6, suiting up in one NHL playoff game with the Boston Bruins. He was a better head coach, enjoying much success as bench boss of the Bruins for five seasons, winning Coach of the Year in 1976. He finished off his coaching career with the Colorado Rockies in 1979-80.

Cherry got involved as a broadcaster on Hockey Night in Canada soon after. Coach’s Corner, throughout it all, has survived.

Alongside sidekick Ron MacLean, Cherry has been loud and controversial throughout his career. In many ways, he didn’t fit the usually conservative-approach to the government-run CBC.

Anyone else would have been fired by now. But not Cherry.

Cherry entertained. He drew ratings. He made hockey more enjoyable for many people.

You may not have liked him, but you had to hear what he was going to say next.

Or what he would do next.

Firing him would have caused protests in the streets during his heyday. When news that MacLean was going to be let go drew attention 15 years ago, the entire country revolted.

If you’re one of our younger readers, you probably don’t relate to Don Cherry. He’s an old man and he’s past his prime.

He’s not must-watch television anymore, but that wasn’t always the case.

There were times that people were more interested in the first intermission than the first period.

Is Cherry a Toronto Maple Leafs homer? Of course he is. Does he step over the line sometimes? You bet. Do I agree with all of his political stances? Not a chance.

As someone who has been involved with the game of hockey and entertained for as long as he has, Cherry belongs in the Hockey Hall of Fame as a builder.

In a Hall composed of 271 players, 105 builders, and 16 referees/linesmen, surely there has to be room for the man that has been an institution for hockey in Canada.

One of the greatest hockey players of all-time agrees.

“His stature within the hockey community is significant and meaningful, and his importance is as great as that of any player, past or present,” Bobby Orr wrote in his autobiography.

I don’t want to build up Cherry by tearing someone else down, but one look at the list of Hall of Famers in the builders category and tell me he doesn’t belong.

And for his missteps – some of which look worse given today’s standards – he’s done a lot of good. Nobody talks up junior hockey in Canada more than Cherry, for instance.

The no-touch icing rule was his soapbox for years before the NHL finally adopted a hybrid icing rule. The new rule is safer for players, and universally accepted. Cherry was right.

“People have no idea,” Orr once told the Canadian Press. “They think Don’s this big rough, gruff guy. He’s paid to give an opinion. Like him or dislike him, when he comes on, everybody, they listen.”

When Pat Burns was of poor health, Cherry pleaded for the Hall to induct the former coach while he was still living. Burns died of cancer in 2010, and was eventually inducted four years later.

Nobody knows what tomorrow will bring, but as Cherry gets up in age, time is increasingly of the essence. Put him in the Hall of Fame.