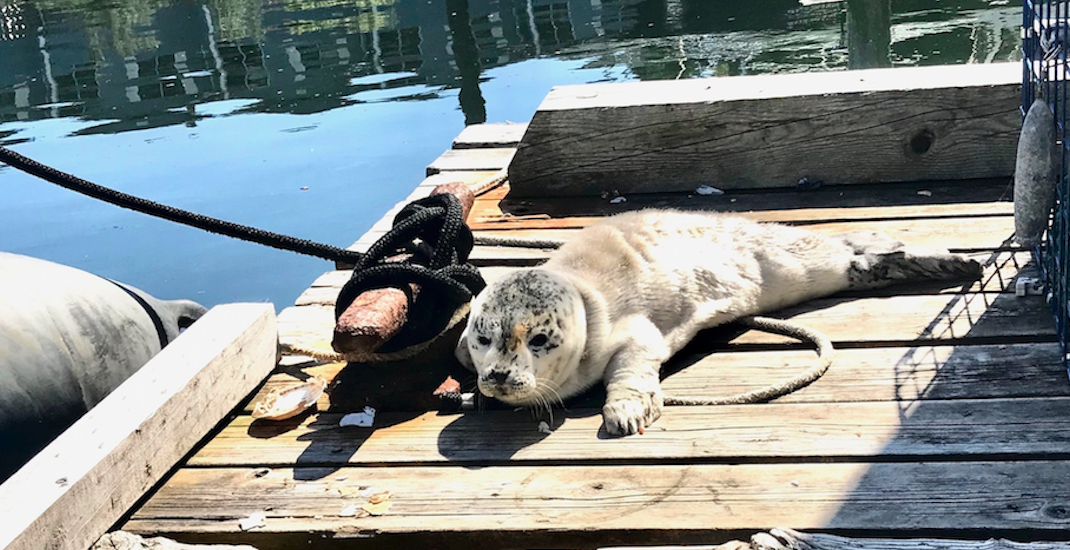 Ok, everyone, we have a seal to name!

As thank you to Daily Hive’s audience for the highly successful “Save our Seals” campaign — which raised $157,000 in less than 48 hours (smashing the goal of $125,000) — the Vancouver Aquarium’s Marine Mammal Rescue Centre has offered a seal for all of you to name!

“We thought it would be fitting, to thank the Daily Hive audience,” said Lindsaye Akhurst, manager of the Marine Mammal Rescue Centre. “That way they can continue to support the Centre, by following their journey through rehabilitation, until their eventual release in the fall.”

With that, we are pleased to introduce you to this little one — your seal pup.

This newborn male pup was observed alone on a dock in Sooke, on Vancouver Island, for 48 hours. When the mother did not return in that time period, on June 3, the Department of Fisheries and Oceans (DFO) approved the seal to be rescued, under new, strict COVID-19 protocols set up by DFO and the Rescue Centre.

With the Rescue Centre closed at the time, the Island Wildlife Natural Care Centre on Salt Spring Island stepped in to start administering care.

And, on Monday, next week, this little guy will be transferred to the newly reopened centre.

Once admitted, he will begin rehabilitation, which will continue for an estimated 11 weeks. The Centre will start him on formula, progressing to “fish school” where staff and volunteers transition him to eating fish, and eventually, he will learn to compete for fish with other harbour seal pups in the pre-release pool.

And, once he’s strong enough, with enough weight, he will be released back into the wild, with other harbour seals at a safe and food-rich location.

Now, what should we name the little one? That’s up to you! Insert your name here.

The form will be open until Noon PDT on Monday, June 15. At which point, Akhurst will select the top 10 names, for voting on by all of you. Voting will run from Monday until Noon on Friday, June 19.

And, on Monday, June 21, we’ll introduce you to this little one’s new name, and we’ll start following their rehabilitation journey together!

On behalf of the entire Team at Daily Hive, thank you all once again for helping us reopen the Rescue Centre.

To those that have not yet donated, there’s a whole lot of adorable faces to adopt!

Although the centre doors are reopening, they still need your help by continuing to donate – to support the care, treatment, medication, and support of rescued marine animals at the Centre and the Vancouver Aquarium.

For more information on the Centre, visit rescue.ocean.org