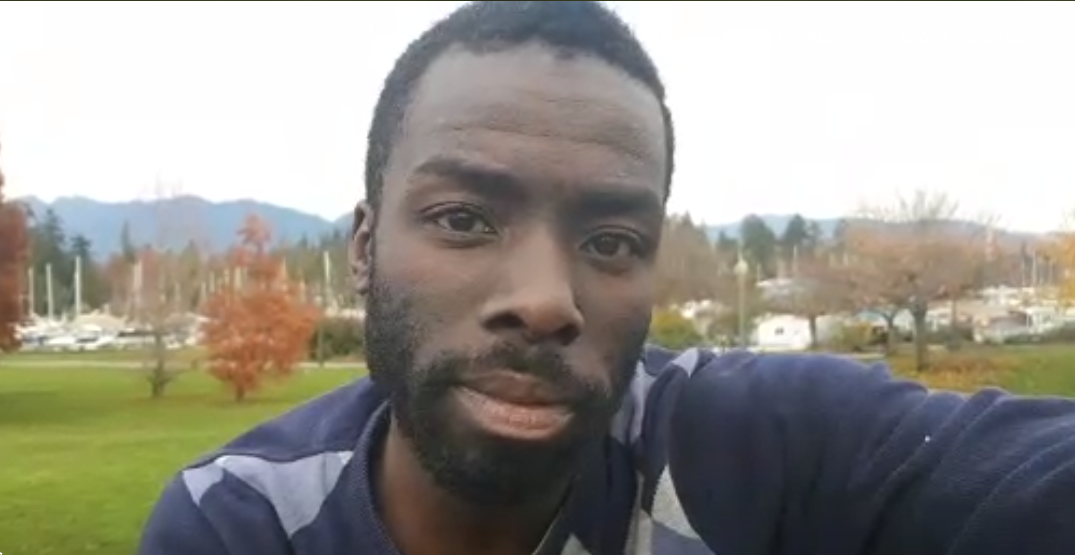 Toronto activist and journalist Desmond Cole claims he was carded by a Vancouver police officer just 24 hours after landing in the city.

Cole, who is known for his work on discrimination, anti-racism, and issues impacting black Canadians, is in town for two speaking events in Vancouver this week.

Cole said he was walking on a sidewalk next to Stanley Park smoking a cigarette when a police cruiser passed him. He explained the incident in a video posted on Twitter on November 13.

“I’m in Vancouver right now and I just got carded by the Vancouver police. It only took 24 hours of me being here in Vancouver from Toronto for that to happen,” said Cole.

“Carding is when the police stop you for no justifiable reason and demand you produce your identification to them,” explains Cole. “This can happen in many ways but it’s a very coercive practice and it often ends in – particularly black and Indigenous people – being arrested being beaten or worse. We can even lose our lives for this ridiculous practice.”

‘This has happened to me so many times’

Cole said that the police cruiser turned around. “He turned around and he came back in my direction and I knew as soon as I saw him coming back that he was coming for me,” he said.

Cole says the officer proceeded to tell him that he was “breaking a city bylaw” by smoking in a public park.

According to Cole, the first question the officer asked was for his name.

“This has happened to me so many times that I already know what the questions are going to be and I know what’s coming.”

“He threatened that if I wanted – and I didn’t want to comply with him – he could get out of his card, put the handcuffs on me and take me to the station.”

Cole said that if he experienced this just 24 hours of being in the city he could “only imagine what it’s like for a black person to walk these streets on the regular.”

In a statement to Daily Hive, Cst. Jason Doucette, media relations officer for the Vancouver Police Department, said that they were made aware of Cole’s video yesterday afternoon and his colleagues have “looked into it.”

“The claim made in the video is not accurate,” said Doucette, adding that a street check “was not conducted and no information was recorded.”

Doucette did confirm that Cole was approached by the officer about a bylaw infraction.

“In this case, our officer used his discretion and chose not to serve a bylaw offence ticket.”

“Our officers work through difficult situations every day and a key component of maintaining public safety is interacting with the public,” said Doucette. “VPD officers carry out their duties with integrity, compassion and respect and are accountable for their actions.”

Cole is not the first person to speak out against the VPD’s alleged carding practices.

In June 2018, the BC Civil Liberties Association (BCCLA) and The Union of BC Indian Chiefs (UBCIC) filed an official complaint “calling for an immediate investigation of the significant racial disparity revealed in Vancouver Police Department’s practice of “street checks” or police stops, often referred to as carding.”

The complaint was based on a Globe and Mail report, which highlighted the VPD’s data on street checks and how the majority of targets were Indigenous or black.

Of that total, approximately 15% of all street checks (14,536) were of Indigenous people and 4% (4,365)  were of black people – despite these groups making up less than a 3% of the city’s population during that time period.

In response to the complaint, Vancouver Police (VPD) Chief Adam Palmer denied the department’s street checks are based on ethnicity.

“If our officers see potential criminal activity or a threat to public safety, they are bound by law, including the Police Act, to address it,” he said. “The police have a legal obligation to preserve peace, prevent crime, and keep citizens safe.”

A person’s race, he added, “does not factor into an officer’s decision to take action to prevent a crime.”

‘I don’t talk about race for attention’

Cole is no stranger to carding.

In 2015, Cole penned an essay in Toronto Life titled The Skin I’m In: I’ve been interrogated by the police more than 50 times –all because I’m black.

The essay details Cole’s experiences with racism and being stopped by police in Ontario.

“After years of being stopped by police, I’ve started to internalize their scrutiny. I’ve doubted myself, wondered if I’ve actually done something to provoke them,” wrote Cole.  “Once you’re accused enough times, you begin to assume your own guilt, to stand in for your oppressor.”

“I don’t talk about race for attention or personal gain. I would much rather write about sports or theatre or music than carding and incarceration. But I talk about race to survive. If I diminish the role my skin colour plays in my life, and in the lives of all racialized people, I can’t change anything.”

Cole notes that being stopped in Vancouver was “ironic” because he was supposed to meet with someone from the BC Civil Liberties Association later that afternoon to talk about carding.

“I can’t put up with this. We can’t continue to live like this,” said Cole in the video.

Cole will be speaking about racial equity in Canada at the Canadian Centre for Policy Alternatives annual fundraising gala in Vancouver on November 15.

He will also be speaking at an event hosted by Black Lives Matter Vancouver on November 16.

Cole did not respond to Daily Hive’s request for comment before publication.