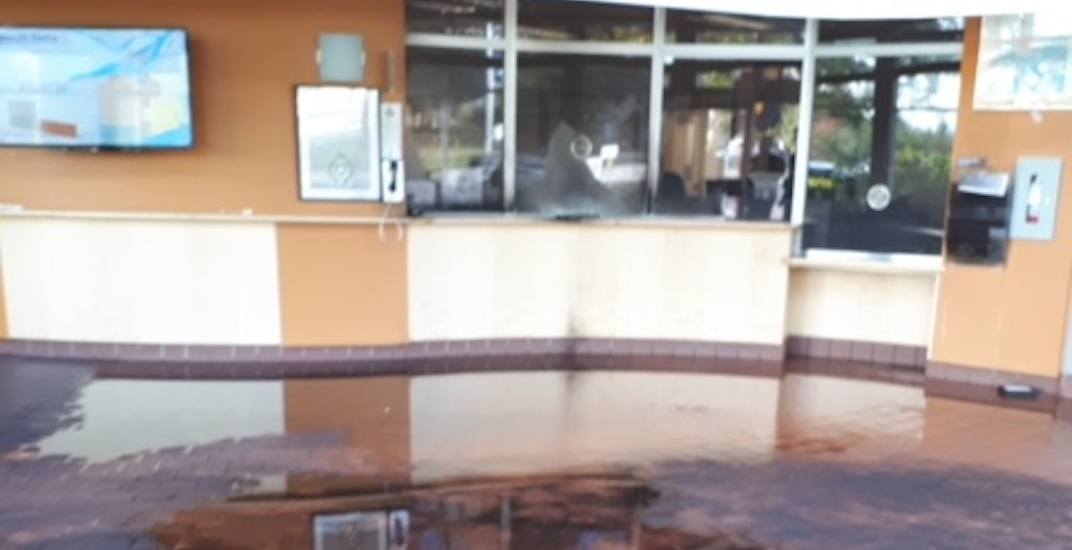 Water damage inside the lobby of the Delta Police Public Safety Building after the fire on October 6, 2018. (Delta Police)

Delta Police are investigating a bizarre incident that occurred early Saturday afternoon inside one of their own police buildings.

According to a release, at about 1:30 pm, a man walked into the Delta Police Public Safety Building at 11375 84 Avenue and proceeded to light the couches in the lobby on fire.

The fire caused the sprinklers to go off, and the building was evacuated.

“Fortunately there were no injuries. The man was quickly arrested and is currently in custody,” said Cris Leykauf, public affairs coordinator for Delta Police, in a statement.

While the fire was quickly put out, the lobby sustained significant smoke, fire, and water damage. As a result, it will remain closed until further notice, but police and staff will continue to work there.

Anyone who requires non-emergency police services in Delta over the long weekend is asked to call 604-946-4411 or visit Delta Police’s main headquarters in Ladner at 4455 Clarence Taylor Crescent.

This is the second incident this week prompting an evacuation of a police building in Metro Vancouver. On Thursday, Steveston Community Police station was evacuated after a woman attempted to drop off explosives.