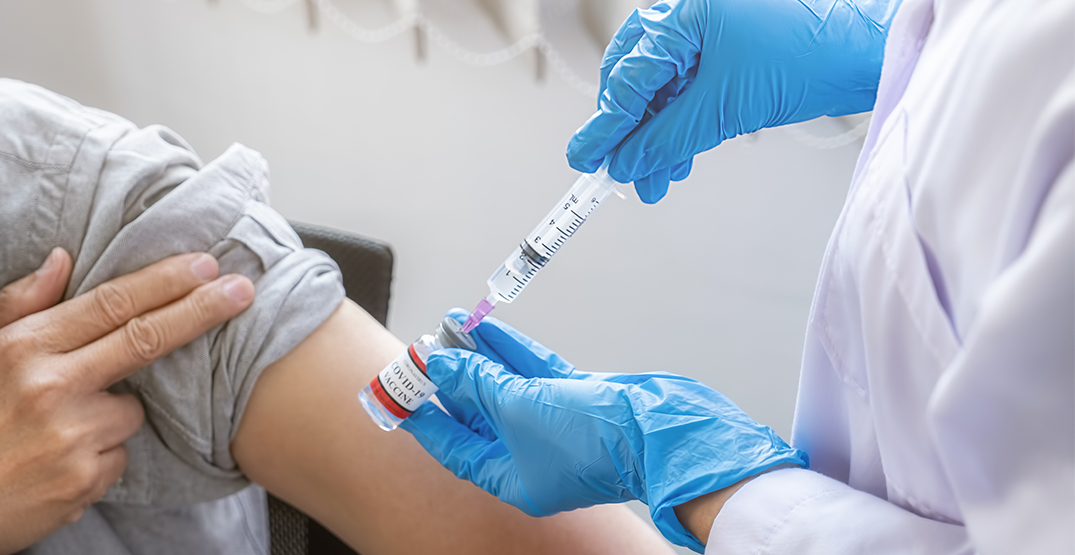 Federal health officials are warning that the Delta variant could spark a resurgence of the COVID-19 pandemic if vaccination rates don’t increase.

According to the data, the “more contagious and severe” Delta variant may spur a resurgence this fall or winter that is greater than officials previously expected.

However, if vaccinations increase, especially amongst younger populations, the potential resurgence would be reduced.

“While the Delta variant has the potential to cause a stronger resurgence this fall or winter, increased vaccine uptake can help to counteract the potential impact,” Tam said.

By maintaining individual precautions, such as mask-wearing and physical distancing, until vaccine coverage is higher, the risk of an overwhelming resurgence is reduced.

It is assumed to be one-and-a-half times more transmissible, and twice as virulent, as the Alpha variant.

Between April 25 and May 23, there was a four-fold increase in the proportion of Delta cases in Canada. The variant is 54% more likely to cause hospitalization than the Alpha.

The majority of Canadian Delta cases have been among unvaccinated or partially vaccinated individuals, which officials note highlights the importance of receiving two shots.

“Although Delta variant of concern has emerged as the latest hurdle, Canada has every opportunity to avoid a strong Delta wave by remaining vigilant to keep infection rates low as we build the vaccination barrier wall high,” Tam said.

Evidence has shown that vaccines are highly protective. There has been a low percentage of cases reported following immunization, officials said. 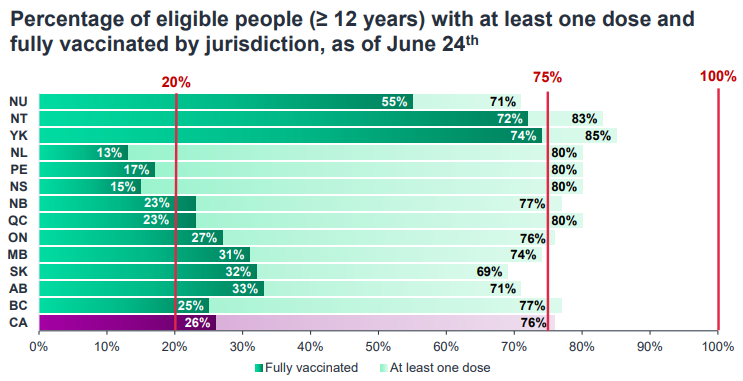 There has been a “sustained” decline in COVID-19 severity indicators, such as hospitalizations and deaths, across Canada.

Average case counts have dropped by over 90% since the peak of the third wave in mid-April. The number of people experiencing severe and critical illness has fallen, too.

Short-term forecasts show that virus cases and deaths will continue to slow nationally over the coming weeks. 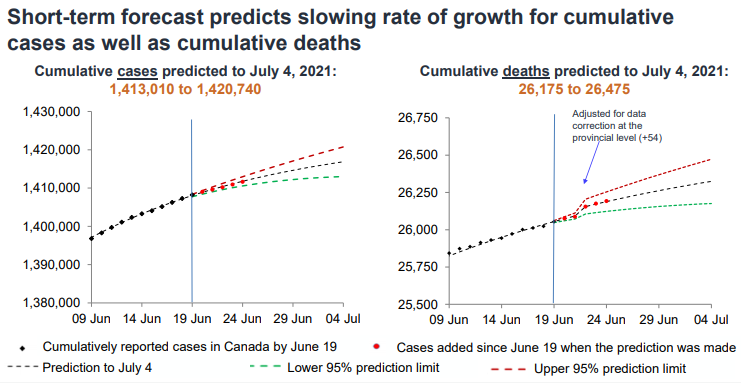 The long-range forecast, which predicts how the pandemic could evolve through to August, shows that the decline should continue, provided contact rates do not increase substantially.

If Canadians increase the number of people they see each day by 50%, the pandemic may resurge. This would lead to more than 2,000 daily cases by August.

An increase of 25% would lead to roughly 1,000 cases reported daily. If Canadians maintain their current number of contacts, though, cases will drop to roughly 500 per day.

Based on the experience of international partners with the Delta variant, there is a need for caution until vaccine coverage is higher, the data shows.

“With the emergence and spread of the Delta variant, it is more important than ever for as many people as possible to get fully vaccinated across Canada,” Tam said.

“We’ve done the work for a better summer. By staying vigilant to keep cases low, we can stay on track for a safer fall and winter.”