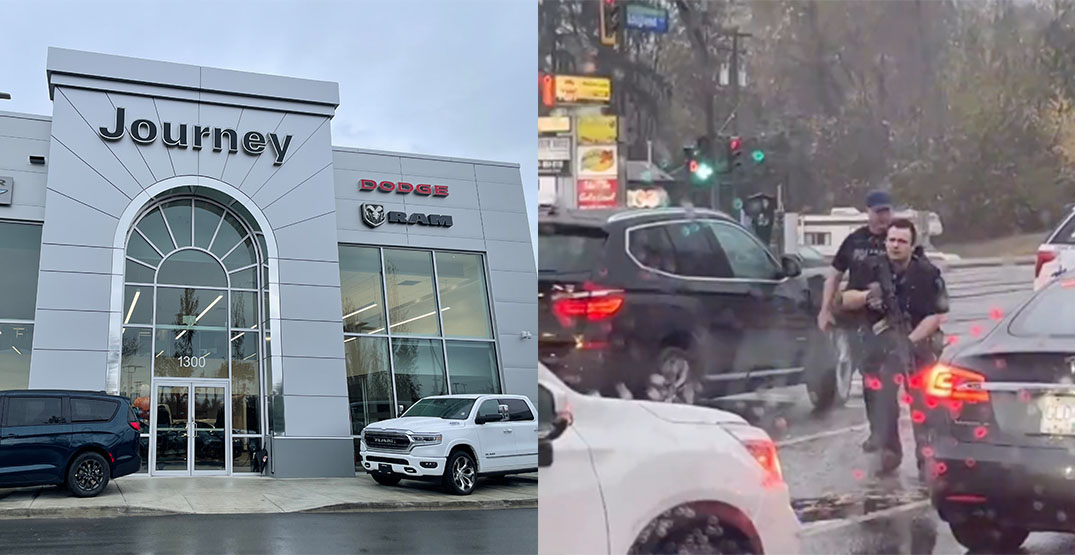 One car dealership employee was taken to hospital Tuesday after four suspects carrying weapons entered the Port Coquitlam lot, stole staff’s valuables, and made off with a high-end vehicle.

Coquitlam RCMP characterized the tumultuous afternoon as a “crime spree” after the suspects crashed the stolen car and one carjacked another vehicle and drove it to Surrey before being arrested.

“The armed assailants physically battered staff and robbed them of personal belongings,” Kornatowsky said. “They then stole a high-end vehicle to use for the getaway, as well as the vehicle they arrived in.”

Police say multiple people at the dealership were injured, although none of the injuries are life-threatening.

Suspects exchanged gunfire with police as they left the dealership near Dominion Avenue and Lougheed Highway, but no officers were hit with bullets.

The shootout and police chase led to major road closures in the Tri-Cities, and some drivers trapped in the gridlock captured videos of the police takedown.

This video was taken by someone who wants to remain anonymous but shows some scary moments yesterday in Coquitlam. pic.twitter.com/WWL26JHjmQ

Two suspects remain on the loose, and police say they’re not sure if those individuals are injured.

“We would like to thank the RCMP and [paramedics] for their quick response and professionalism both during and after the incident. They were on scene within minutes from the first call and stayed well after to ensure everyone was ok,” Kornatowsky said.

He added the dealership would work with victims’ services to ensure staff receive the help they need to recover from the event.