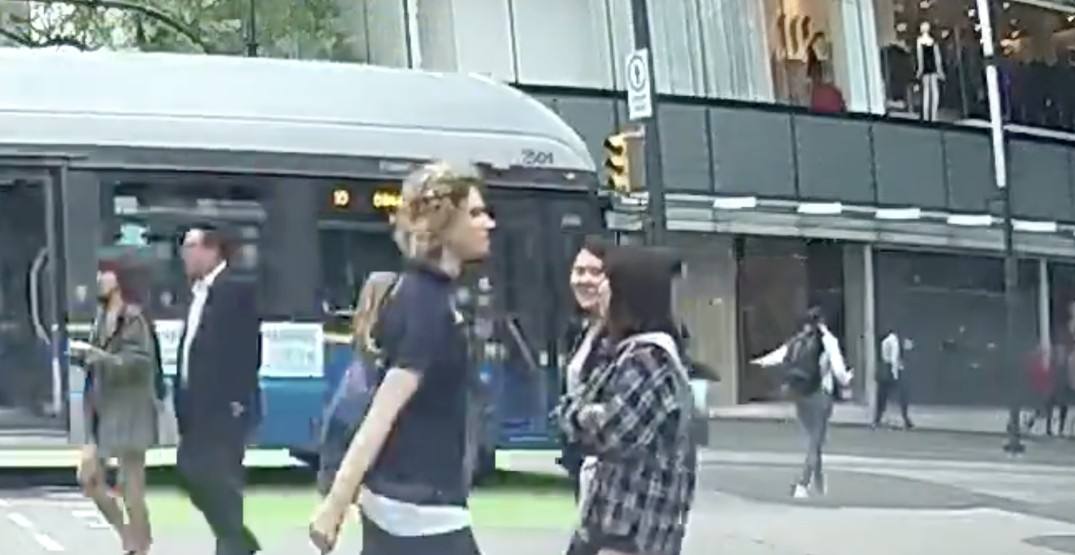 A jaywalking pedestrian running across a busy downtown intersection during the afternoon rush hour was hit by a TransLink bus.

Dashcam footage from June 6, 2018, was posted on Reddit and shows a pedestrian running across the street at the intersection of Dunsmuir and Granville when the light is green for traffic.

A TransLink bus going through the light could not stop in time and ended up hitting the pedestrian, who fell to the ground.

Anne Drennan with Metro Vancouver Transit Police told Daily Hive that the 28-year-old woman luckily did not suffer any injuries after the crash.

“She was able to get up on her own very quickly and was sent to the hospital and was checked over.”

Drennan says the woman admitted she was not “looking either way” before running across the street to catch another bus that was headed southbound on Granville street.

“The saving grace is the bus that hit her was moving very slowly,” Drennan noted.

The VPD was also called to the scene, but when they arrived the collision had been cleared.

“The VPD received a call just after 5 pm, June 6, reporting that a pedestrian may have been involved in a collision with a bus near the intersection of Dunsmuir and Granville,” Cst. Jason Doucette of the VPD told Daily Hive via email.

“It appears we were notified after the fact and no one was at the location when our officers arrived. No information was provided to the VPD about those involved.”

According to VPD statistics, there have been four pedestrian traffic-related deaths so far in 2018, compared to six in 2017, and 11 in 2016.