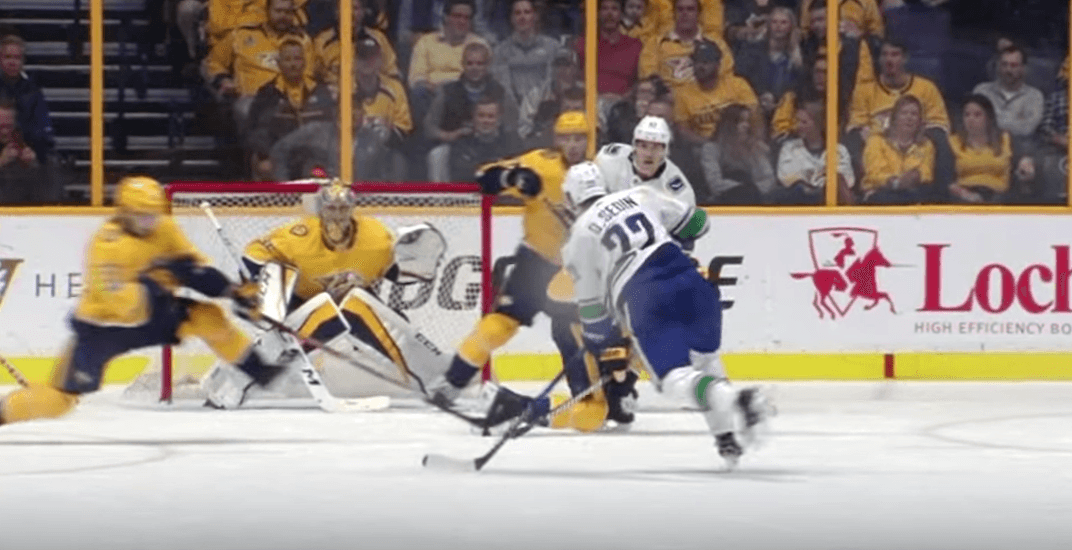 He’s the 87th player in NHL history to achieve the milestone, and just the second player to do it entirely with the Vancouver Canucks.

The other Canuck is of course his brother Henrik, who achieved the milestone in January. The Sedins are the first brothers in NHL history to each score at least 1,000 points.

Here’s a look at the goal:

It was nice for Daniel to hit the milestone on a goal – and a big goal at that. The 37-year-old winger beat Nashville goaltender Pekka Rinne with a third period wrist shot on the power play, to tie the game at three.

Vancouver went on to win the game.

It was also a very appropriate way for him to score. An incredibly patient player throughout his career, Daniel had the puck in the slot, but chose to pass off to Brock Boeser. When Boeser passed it back, Daniel beat Rinne five-hole on a shot that deflected off a defender’s stick.

Unlike Henrik’s milestone moment, Daniel’s was greeted with little fanfare. His teammates, seemingly unsure of what to do, didn’t pour off the bench to celebrate. It also came on the road, unlike Henrik’s 1,000th point which came at home.

Instead of a lengthy standing ovation, Daniel got a quiet mention by Nashville’s public address announcer.

The love for Daniel will come on Saturday, but should be worth the wait. The Canucks return to Rogers Arena to play the Toronto Maple Leafs in their next game, as the lead-in game on Hockey Night in Canada.

Expect a presentation, a video tribute, and some well deserved cross-country love for a Canucks legend.