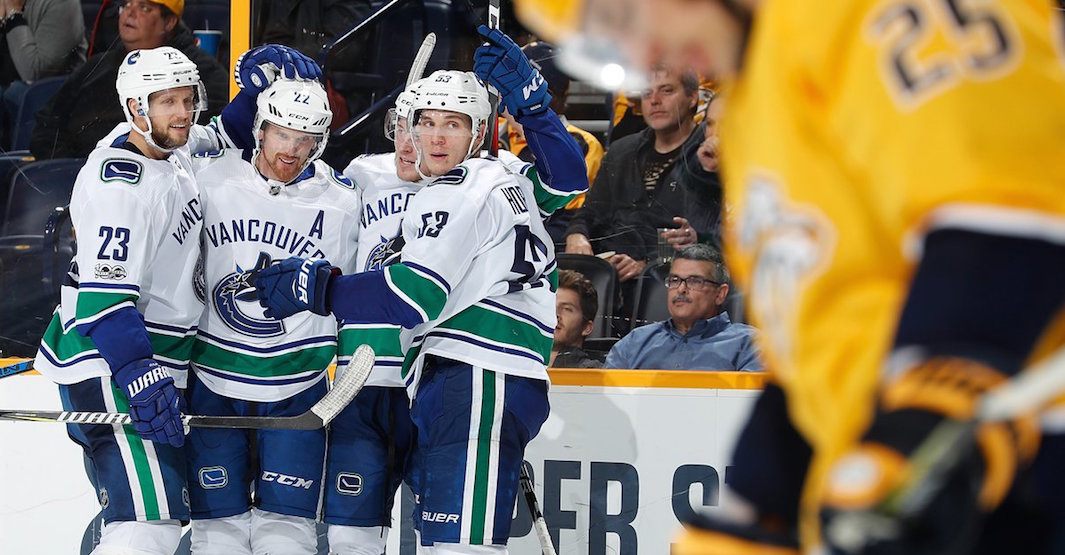 Put it in the record books!

Daniel Sedin picked up his 1,000th career NHL point in Nashville on Thursday, making him the 87th player in NHL history to accomplish that feat.

More on that in just a second, but there were a ton of other storylines in this game that got overshadowed by Daniel’s historic moment.

Brock Boeser had three points, Nikolay Goldobin played (and had a nice assist), Anders Nilsson made a save of the year candidate. Good thing Omar got his passport in time to make the game!

It was a game the Canucks wanted to win for Derek Dorsett, and they accomplished just that in a 5-3 win over the Predators.

Here's the full replay you've been waiting for. 🚨 #DANIEL1000 pic.twitter.com/yswU6QntI7

Eight months and 10 days after Henrik Sedin joined the 1,000 point club, his brother Daniel joins him.

The stars didn’t quite align like they did for Henrik’s 1,000th point (scoring against Luongo in front of a Vancouver crowd, primary assist by Daniel) but this was a huge moment in Canucks history.

Daniel now joins his brother as the only two players in franchise history to record 1,000 points with the Canucks.

The Sedins are in the history books for another reason too. They’re now the only brothers in NHL history to each hit the 1,000-point mark.

Like Henrik, Daniel also accomplished it on a multi-point night, although Eriksson’s empty net goal gave him three points. He’s now up to 1,001 points in his career.

Side note: That was the nicest empty net goal I’ve seen since Henrik scored one from the seat of his pants a few years back.

Congrats to Daniel on the incredible milestone. Hopefully there are still many more points to come from both twins.

Before any more good stuff, let’s get the bad news out of the way.

Derek Dorsett’s playing days are over.

After missing most of last season with a herniated disc in his neck, the 30-year-old forward was enjoying a resurgence with the Canucks this season, but that run has now come to an end.

Dorsett left the Canucks’ road trip on November 14 after experiencing neck and back soreness, and the news he got when he returned to Vancouver was what nobody wanted to hear.

Dorsett put his feelings into words as best he could, but it’s hard to imagine how this feels for him.

“What I can say for certain right now is that I left it all out on the ice. I gave my heart and soul to the teams I played for and never backed down from a challenge, including this one." – Dorsett (@Twigy15) pic.twitter.com/10OmlCFotb

Dorsett was on pace for a career year with the Canucks this season, scoring seven goals through 20 games. But it wasn’t goal scoring that endeared him to so many fans and teammates.

It was his heart and work ethic. His willingness to stand up for his teammates and be a leader. Despite his small size, Dorsett never backed down from a challenge. That’s what made everyone love and respect him.

Dorsett has a wife and two young boys. This is undoubtedly the right call. There are a lot more important things in life than hockey.

Thanks for everything you did in Vancouver, Derek.

Okay, back to the good news.

After two pointless games, the Brock Boeser show was back on Thursday night.

If it wasn’t for Sedin’s 1,000th point – which rightfully trumps all else – Boeser would’ve been the main takeaway from yet another Canucks game.

He picked up two goals and an assist, including the game winner.

If you ask me, the first goal is his best snipe yet.

Boeser has Roman Josi right in front of him, but manages to pull the puck towards him and shoot it through Josi’s legs and top corner past Pekka Rinne. Absolutely beautiful.

Almost as beautiful as the reaction from Omar.

4. Goldobin getting a look

If you asked me to predict which of the four lines Nikolay Goldobin would play on, the Horvat line might’ve been my fourth choice.

Not that he didn’t deserve it, it’s just not often we see a young player given a prime opportunity like that right away.

With Goldobin’s 19 points in 18 AHL games this season, it certainly makes sense to put him in an offensive role.

It was Boeser, Horvat, and Goldobin, and it was dangerous. The line scored twice at even strength, with Goldobin providing the primary assist on the game-winning goal.

Beauty goal by Boeser (his second of the night)#Canucks now up 4-3 pic.twitter.com/JH4OUYEBtS

One of the things that will likely get lost through all the storylines in this game was this monstrous save from Anders Nilsson in the second period.

That’s certainly the best save I’ve seen Nilsson make, and it might beat all of Markstrom’s beauties from this season as well.

It was a huge glove save at a key point in the game. A goal would’ve put the Canucks down 3-1, but instead they were able to tie it up 2-2 heading into the third.

Considering the Canucks are 1-9-1 when trailing after two periods this season, this was a game-changing save.

He won’t ever make that contract look good, but Loui Eriksson is starting to show signs of the player he was signed to be.

On Thursday, Eriksson made a great defensive play to create the empty net play he eventually finished off. He’s also getting to the net more, which is how he scored his first goal of the game.

With two goals against Nashville, he’s up to eleven points in fourteen games on the season. He’s been on fire of late with nine points in his last seven games.

He needs to keep it up, but it’s good to see Loui starting to make an impact on more than just the Canucks’ salary cap.

Though not as peachy as the last road trip, the Canucks managed to break even with a 3-3 record. They now head back home to face the Toronto Maple Leafs on Saturday.